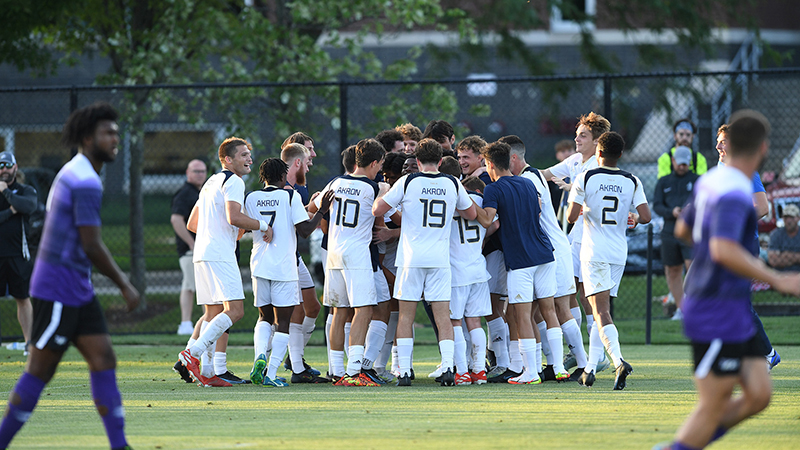 What happened in 2020-21: With most programs playing between five and eight games in the spring, Quinnipiac secured the regular season title. After some lean seasons, Monmouth won the conference tournament as the No. 6 seed. The Hawks picked up a first round victory as well, and aim to build on that momentum in the upcoming season.

What to expect in 2021: It will be interesting to see how the small sample of spring reflects on the fall. George Akampeke and Sean Murray are back after the tournament run for Monmouth, and offer the defensive template for more sustained success. Brage Aasen and Paulo Soares return for Quinnipiac, giving them confidence of repeating the spring performance. Rider, Niagara, St. Peter’s(m) and Fairfield could get into the mix for the title as well.

What happened in 2020-21: In light of the pandemic, there was no postseason tournament in men’s DI soccer. Bowling Green captured the regular season title and automatic bid. West Virginia was perhaps unlucky not to get an at-large nod after a strong campaign.

What to expect in 2021: The ever-changing Mid-American Conference for men’s soccer added Georgia State and Georgia Southern, while SIUE returned to the MVC. West Virginia is moving to Conference USA in 2022. Bowling Green could be slight favorites, though both Chris Sullivan (North Carolina) and Achille Robin (Washington) transferred to Power 5 programs. Akron has a number of new faces on the roster, but a solid talent level. Georgia State could be sneaky contenders after a strong 2020-21 season, coming up just short of a Sun Belt title. The Mountaineers continue to get better, and could be a factor before leaving. Northern Illinois brings back Nick Markanich and Anthony Markanich after earning First Team honors in the spring.

What happened in 2020-21: Another year, another run of Missouri State dominance. The international-heavy roster is still searching for a deep run in the NCAA tournament, but did beat Maryland in the second round.

What to expect in 2021: Considering the caliber of returners, Missouri State is the easy favorite in the new season. However, there is talent at other programs. Loyola-Chicago is not that far removed from postseason appearances, and Billy Hency is back after earning Player of the Year honors in the spring. Drake was in the mix last season and while they have holes to fill, could compete for first place. The addition of SIUE for men’s soccer adds another solid program that could throw things for a loop as well.

What happened in 2020-21: It was a spring sweep for St. Francis Brooklyn, winning the regular season and conference championship matchup with LIU. St. Francis (Pa.) didn’t compete.

What to expect in 2021: Howard is the new program joining, while St. Francis (Pa.) is back on the pitch, giving the NEC 10 teams. There’s a number of programs that should provide for a competitive spring, from the top two from the spring in LIU and St. Francis Brooklyn, or perhaps Central Connecticut State(m), Merrimack, Fairleigh Dickinson or even the PA version of St. Francis.

What happened in 2020-21: Another league that split into separate divisions, Lafayette triumphed in the North, while Loyola (MD) won the south. It was second-place team American that made it to the NCAA tournament by way of the Patriot League crown, making it into the second round.

What to expect in 2021: Most programs continue to improve, including American and Lafayette. That pair are going to be eager to show it wasn’t simply a case of small-sample success. Navy should be back in the mix, while Army retools and will have a new look with Brian Plotkin taking over from Russell Payne. If Lehigh bounces back as well, it could really turn into a wide-open chase for first.

What to expect in 2021: Head coach Chris Rich led UNCG to a conference tournament title, and he will have his sights set on a first-place regular season as well. Mani Austmann signed pro in Iceland, a blow to the attack. East Tennessee State brought in a solid recruiting class in an effort to breakaway as well. Defending champions Furman lost some big pieces, with Ben Hale graduating, but Rookie of the Year Jake Raine is among the key players back in the fold. One of those three teams are certainly the likeliest to win the title, though Mercer’s slowly improving and could be a surprise outfit.

What happened in 2020-21: It was a crazy season in the Summer League, with Denver winning the regular season title with a 6-2 record (and six games canceled or postponed). Omaha, which posted a record of 5-2-1, ended up in the NCAA tournament after the Pioneers had to withdraw due to COVID issues.

What to expect in 2021: While Denver could be seen as the slight favorite, there are plenty of players back at various programs to suggest a wide-open race for the Summit (pun intended). Hugo Kametani was one of Omaha’s breakout players and will look to do it again; Dante Brigida is back for his final season of eligibility at Oral Roberts. Head coach Jamie Franks will look to really cement Denver’s authority and put together another deep run in the NCAA tournament. UMKC showed some signs of quality under head coach Ryan Pore as well, while St. Thomas (Minn.) embarks on a first season of DI soccer.

What happened in 2020-21: Both Loyola Marymount and St. Mary’s (CA)(m) have more or less seized control of the conference, with the two California programs winning the regular  season title the past three years. In the spring, it was LMU knocking the Gaels off the top spot, where they’d been the past two years.

What to expect in 2021: While the two programs at the top seek to maintain control, challenges are likely from elsewhere. Portland has recruited well over the past few years, though turning that into results is never guaranteed. There is potential that is LMU and St. Mary’s aren’t quite at the level of the past few years, it could throw the race wide open, with the likes of San Diego, Santa Clara, San Francisco jostling for position along with the Pilots.

What happened in 2020-21: In his final season as a head coach, Schellas Hyndman’s Grand Canyon side made it a memorable one. With an 8-0 record, Grand Canyon won the regular season, and even though Air Force won the WAC tournament, GCU still made it to the NCAA tournament.

What to expect in 2021: Leonard Griffin took over at GCU, and he wasn’t the only new coach. Kyle Beckerman was tabbed to take over at Utah Valley, and the progress there is going to be worth it. Seattle gets standout junior Declan McGlynn back after he took off the 2020-21 to test out the pro waters. UTRGV and San Jose State, which finished second and third respectively, could make things interesting. And Air Force one of the most consistent programs over the past few years, should be in the running with key returners back and a very intriguing group of newcomers.