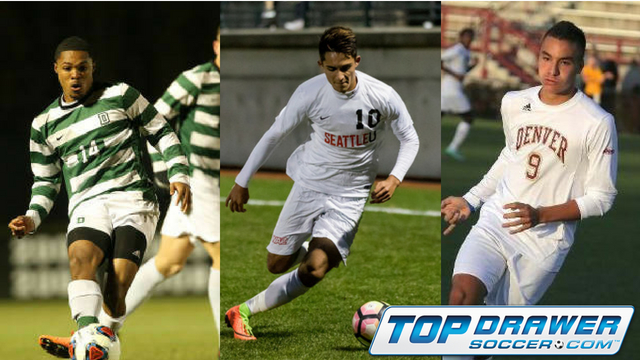 What happened in 2017: Two programs from the Ivy League made it to the NCAA tournament, as both Dartmouth and Columbia earned spots in postseason play. The Big Green won the regular season title, finishing on 19 points, three ahead of Columbia as the two sides ran away at the summit.

What to expect in 2018: Dartmouth has a new head coach this season, after Chad Riley took over at Notre Dame at start of the year. Bo Oshoniyi is the man in charge in Hanover now, moving from East Tennessee State. That shouldn’t have a huge impact on the race, as it should still boil down to Dartmouth and Columbia. Both programs have plenty coming back and big holes to fill. Below them, Brown brings back Jack Hagstrom, though loses other All-Ivy Performers from last year’s class.

What happened in 2017: Fairfield swept the regular season and conference tournament titles in a competitive league. Rider, Canisius, Manhattan, Quinnipiac and Iona College rounded out the top six.

What to expect in 2018: Another close race should be on the cards, whether it’s Fairfield defending its crown, Canisius emerging as the first-place side or Rider among the top teams. Quinnipiac, Manhattan, Marist or Monmouth have intriguing talent, depending on how things come together and newcomers mesh will dictate how the season plays out.

What to expect in 2018: Western Michigan lost a big chunk of last year’s successful squad. Akron, in the same vein, brought in several newcomers, both freshmen and transfers, in an attempt to keep the squad at a high level. Can another squad burst its way into the top spot? West Virginia brings back midfielder Joey Piatczyc, who missed last fall with an injury, and could be ready to pounce. SIUE’s a program that has enjoyed success in previous campaigns.

What happened in 2017: Missouri State’s defense-first approach led to regular season dividends, as the program won the regular season title despite scoring nine goals in eight conference games. On the other side, Central Arkansas scored 16, but conceded 14 goals to come in second place. The latter approach led UCA to the NCAA tournament, by way of winning the MVC tournament.

What to expect in 2018: Eight starters are back in the mix for Missouri State, and with 93 percent of its goals back, including Conor Ingram, seem likely to make another run at a conference title.

What happened in 2017: The dominance of St. Francis Brooklyn continued last fall, as the program won its second straight crown and fourth in the last five seasons. They held serve in the conference tournament, advancing to the NCAA tournament where they lost 3-2 in overtime against Fordham.

What to expect in 2018: St. Francis Brooklyn’s roster is anchored by several European players that helps the program sustain its high level. Among the returnees are Ali Tounkara and Matteo Caribotti. Chasing SFU will be LIU Brooklyn(m), title-winners in 2015. They are led by reigning NEC Player of the Year Rasmus Hansen and defender Filip Nordstrom. Fairleigh Dickinson’s group has the makings of a contender, whether its sophomore forward Jacob Labovitz or senior Ahu Obhakan. St. Francis (PA)(m) enter the season with a new head coach, as Frank Olszewski took charge of the program, while Mount St. Mary’s(m) revived its men’s soccer program for the upcoming season.

What happened in 2017: After winning the Patriot League by two points, Loyola (MD) couldn’t close out the automatic bid in the conference tournament. Instead, sixth-place Colgate spun together the results to not only win the Patriot League, but also make the Third Round of the NCAA tournament.

What to expect in 2018: On paper, another close race between Loyola (MD) and Boston University (second place finishers last year) seems likely. Bucknell, Lehigh, Holy Cross and even Colgate could certainly step into the mix as well.

What happened in 2017: East Tennessee State emerged as winners of the regular season championship, three points ahead of UNC Greensboro. Furman finished four points off the pace, with Mercer in fourth. Mercer managed to put together a run at the right time, winning the Southern Conference tournament championship.

What to expect in 2018: With ETSU head coach Bo Oshoniyi heading north to Dartmouth, there’s a new coach on last year’s defending champions. David Casper, an assistant coach at Kentucky, was tabbed as Oshoniyi’s replacement. That’s not the only new face in the conference, as Belmont is a new addition this year, bumping the number of teams to seven. Depending on how Casper adjusts, UNC Greensboro and Furman should be near the top, though ETSU and Mercer won’t be far behind.

What happened in 2017: A College Cup side in 2016, Denver managed another Summit League regular season crown a year ago. But NCAA tournament play eluded them when Omaha topped Denver on penalty kicks in the conference tournament, bumping the Pioneers from the postseason.

What to expect in 2018: It wouldn’t be surprising to see Denver near the top of the standings once again, especially after Jason Mims left Omaha to pursue a spot with Real Salt Lake’s Academy. The Pioneers have added an impressive recruiting class to go with returning players like Andre Shinyashiki.

What happened in 2017: Since joining the conference, Coastal Carolina has enjoyed a run atop the standings, winning the last three regular season titles and two straight conference tournaments. Last year, the Chanticleers edged Georgia State by two points.

What to expect in 2018: Hartwick’s move to Division III means that the Sun Belt is down to five teams ahead of a new season. Coastal Carolina enter the season as favorites, with the combination of experience and quality returning. It should be a relatively close race, however. Georgia State and Georgia Southern have the right pieces and players to make a run at it, while Appalachian State is a team that is only going to get better.

What happened in 2017: In a competitive 2017 season, San Francisco nabbed the regular season title and NCAA tournament spot that came with it. Pacific, which snatched an at-large bid for the tournament, came in second place, followed by Portland and Saint Mary’s (CA)(m).

What to expect in 2018: Preseason polling is far from guaranteed. But the 2018 edition shows that the coaches in the WCC expect a very close contest from the top five teams. From an individual talent perspective, Pacific holds a slight edge over Portland. That being said, San Francisco has the experience of winning last season, San Diego has some up-and-coming talent that could surprise, while St. Mary's (CA)

What happened in 2017: A tremendous campaign for Air Force saw the program go undefeated to win the regular season title. Seattle, which has turned itself into a perennial contender in the conference, won the conference tournament.

What to expect in 2018: Either Seattle or Air Force looks primed to make a run at the top of the standings. However, the pieces that UNLV and San Jose State bring back for this season could prove to be difference makers. With a total of 11 teams in the conference, can’t count out a run by Grand Canyon, Cal State Bakersfield(m) or Utah Valley.