Men’s Team of the Week: September 7 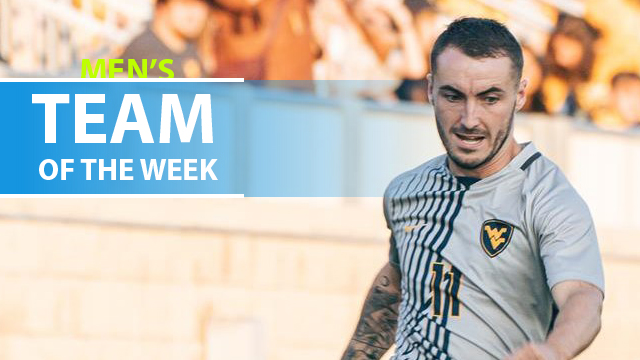 Welcoming two ranked opponents to Morgantown last week, it just might have been a season-defining pair of games for West Virginia.

The MAC side won against both Pittsburgh and Penn State, defeating the ACC side by a 2-1 score and then a more comfortable 3-1 defeat of the Nittany Lions.

Luke McCormick scored the first goal against Pitt, and then assisted on the opener versus Penn State. The junior from England put in a quality shift in both matches to earn the latest men’s Player of the Week nod for the fall 2021 season. The wins will be extremely handy for WVU’s at-large chances if they are unable to win the MAC.

Check out some of the other top performances from the past week of men’s DI soccer.

GK Paul Kruse, Creighton – The Bluejays picked up their first win of the season on Friday night, a massive 3-0 win at Indiana. Kruse made three saves in the shutout, facing 12 corner kicks.

D Diogo Pacheco, Akron – Pacheco turned in a strong week for the Zips. He registered four assists in two games. First, he sparked Akron to a dramatic 2-1 victory at Michigan State on Monday, Aug. 30 by ssetting up both goals. In a 3-0 triumph past Robert Morris on Friday, he setup two more.

D Christian Wood, Loyola Marymount – It was an exceptionally busy week for LMU, with three games. Wood played every minute of two wins and a draw, helping a back line concede just once in that stretch. He also assisted the winning goal on Sunday, a 1-0 defeat of UC Irvine.

D Kieran Sargeant, Georgetown – Making the first start of his collegiate career, Sargeant excelled on the road against Syracuse, helping the Hoyas keep a clean sheet. He can play centrally and on the left, his versatility a huge asset.

M Luke McCormick, West Virginia – Two wins, with a goal and an assist capped off a perfect win for McCormick, who was also named the MAC Player of the Week.

M Jack Singer, California – Singer went on a goal-scoring binge, grabbing the winner against Dixie State, and then tallying twice versus UNLV. Cal won both games, and are now unbeaten in three straight.

M Tyrone Mondi, Oregon State – The Beavers spun off two wins last week against Air Force and on the road at Portland. Mondi scored two goals, including both winners, while also chipping in an assist against Air Force.

M Lucas Meek, Washington – Two goals from Meek powered Washington to another win, this time a 2-0 defeat of Grand Canyon. It’s a strong start out West for the Huskies.

F Malik Henry-Scott, Tulsa – The forward from Texas scored a goal and added an assist in Tulsa’s impressive 3-0 win against Missouri State.

F Eythor Bjorgolfsson, Kentucky – Goals will be crucial for Kentucky’s chances of causing trouble in Conference USA. So to see Bjorgolfsson score twice against Wright State, and assist the winning goal versus Notre Dame, is very crucial.