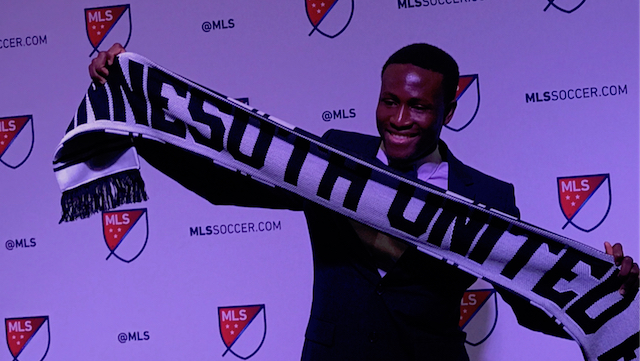 LOS ANGELES - Minnesota United tied its history to Abu Danladi on Friday at the 2017 MLS SuperDraft. The MLS expansion franchise selected Danladi with its first selection in club history. The forward became the fifth UCLA Bruin to be selected with the first overall pick. He is the first attacking player to earn that recognition.

Danladi was one of two players from Ghana selected in the first five picks. Columbus Crew selected Dayton defender Lalas Abubakar with the fifth pick. Abubakara was a bit of a surprise, but the Crew still earned high marks on the day for going after a player familiar to the club’s coaching staff.  Check out the MLS Draft grades for all of the franchises below.

Atlanta United selected a center back and a midfielder with their first two picks as a franchise. Robinson was unanimously viewed as the best defender in the class and United should be ecstatic to get the chance to develop his game further in the coming season. Gressel is bigger question mark for where he will fit in at the professional level as he grew accustom to being the focal point of the Providence attack over the past few seasons.

In a six-player draft, Chicago Fire elected to trade out of the third pick and pick up $250,000 in allocation money from New York City FC. After slipping down the draft board, Fire selected Louisville’s Daniel Johnson. The Combine standout is a lottery ticket for the Fire. It’s a minimal risk selection in an otherwise shallow draft.

Hamilton was a bit of a surprise with the 15th selection in the 2017 MLS, but he makes sense to the Rapids and he is a player that the staff should be very familiar with after playing with the Pioneers in 2016.

The Crew made the big splash in the opening 10 picks with the selection of center back Lalas Abubakar and then Niko Hansen at No. 9. Abubakar looked great at the combine, but that’s pretty far removed from a normal soccer environment. He had some stellar games with Dayton. He could be a key cog for Columbus in the future. However, the franchise did ink Alex Crognale to a Homegrown contract in the offseason so there is a logjam for players at the center back spot now.

D.C. United started the run on right backs with the selection of Odoi-Atsem at the middle of the first round. The Maryland product is an eager competitor and looks like a solid addition to the team that Ben Olsen is trying to build in the nation’s capital. I think Klenofsky could end up as the best goalkeeper in this class.

Hayes slipped in the draft for whatever reason, but FC Dallas was eager to happily welcome him to Frisco, Texas. Hayes is solid on the ball. Decent at intercepting passes. He needs to improve in his speed of play if he wants to fit to FC Dallas, but he is coming from a college program that played a similar style.

Dynamo dropped down in the draft from the top four to the 10th pick. The Texas franchise decided to select center midfielder Joseph Holland, who had a strong showing at the combine. McGuire and Radjen are a crapshoot that seem like long shots for any playing time in the near future with the first team.

The only action that LA Galaxy made on Friday was signing LA Galaxy II defender Hugo Arellano to a Homegrown contract with the first team. It was a nice addition to the depth of the squad. Arellano might not be ready for the main stage yet, but he has shown that he could develop into a player for the future.

The Danladi narrative prior to the draft is that he is injury-prone. The truth is much more complicated than that. He struggle with a compact schedule and a heavy dependence on him being fully fit for every outing. The professional game is more forgiving with the extended calendar, which should help keep the attacker on the field. For all of the negatives, Danladi is a tremendous talent and arguably the best from the storied Right to Dream academy to come to the States. He was the right pick at the start of the draft.

Impact tabbed UCSB forward Nick DePuy with their first pick of the day. DePuy is a bit of a ridle for MLS teams. He was pretty average in his final season with the Gauchos, but he had a stellar campaign as a junior. DePuy is not a creator. He is a finisher and needs to be on a team that keeps his job simple.

Wright was good value at the end of the first round. He is a target forward with the body to hold off defenders. He needs to improve his technical ability at the next level, but the clay is there for Jay Heaps to sculpt a center forward from the Vermont product.

New York City FC coughed up $250,000 in general allocation money for the third youngest player available at this draft in Jonathan Lewis. The freshman campaign for Lewis was solid but not spectacular. New York City FC saw enough for from the Florida-native to make him a top three selection in this draft.

Lewis was disappointed that he slipped in the draft, which should add a giantic chip to his should in his debut season. Lewis is a creator with the ball and was the best player for Boston College over the past few seasons.

It was a quiet day for Orlando.

Union did not have a pick in the first round so they took a flyer on a couple of players in the second round who could pan out to help the franchise in the future. Epps was never a breakout star with South Florida, but he was solid enough along the way to catch some eyes from the professional level.

The Timbers jumped up the board to grab Ebobisse with the fourth overall selection. The Duke forward provides plenty of promise for the Timbers strike ford. Ebobisse was the leading scorer for the U.S. U20 Men’s National Team in 2016 and might be called into duty in 2017 with the youth national team.

Dunk is a no-nonsense type of player who could help a team immediately. He is not exceptional in any category, but he does a lot of things consistently well. His play during the 2016 Men’s College Cup against Ema Twumasi showed that he can be a great 1v1 defender.

The difficult part for college players entering the draft is that they have no choice on where they will be selected in the draft. In San Jose’s case, Jackson Yueill is a peculiar selection because he does not really fit the style of play that the Quakes have utilized in recent years. If rumors about Yueill being the favorite of new general manager Jesse Fioranelli are true, this could signal a change in the Bay Area in terms of players and style of play.

Sounders did not seem overly optimistic about the draft as a whole and the trade with NYCFC on draft day made that clear to everyone. The Sounders moved out of the No. 16 selection in exchange for $75,000 in general allocation. The Sounders did take Nana-Sinkam with the last selection of the first round. The Stanford center back will probably start with the reserves, but his impressive college career leads many to believe he will be around in the league for a while. Oduro looked capable of helping the Sounders II immediately from his brief showing at the MLS Combine.

Storm ended the run of right backs during the first round. He looks like the type of player that could develop into a favorite of Peter Vermes. He has the athletic traits that Vermes rates and the competitive nature to want to earn his spot on the team.

Aubrey slipped very far on draft day after a poor showing during the combine in Los Angeles. The Notre Dame center back had a very good year in college though. He could be a steal at this point of the draft.

The Whitecaps love to stock up on defenders and the 2017 SuperDraft was another excuse to load the cupboard with defenders. Nerwinski seemed like a reach at that point in the draft, but the Whitecaps staff clearly rates him highly. DeVries was a nice addition from the second round.