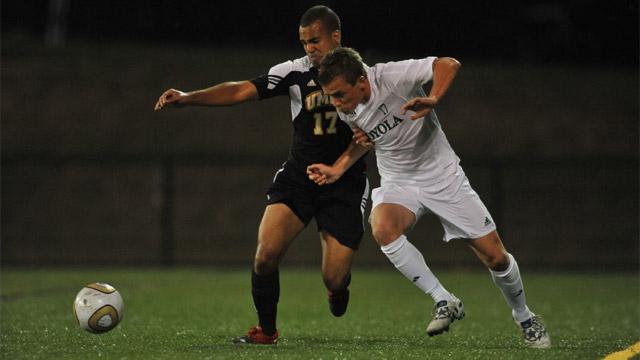 Ocean City, NJ – On a warm Memorial Day weekend with the Atlantic Ocean just a parking lot, boardwalk and beach away, the victory appeared to be won by the Long Island Rough Riders, but the Ocean City Nor’easters fought back to earn a 2-2 draw with a last second goal.

Long Island possessed the ball much better, but they didn’t address the problem of marking up the more physical Ocean City attackers. Moreover, Long Island lacked the intensity and commitment in the second half that they exhibited in the first half.

The first goal was scored by Keith Detelj in the 36th minute. The play started with a brilliant pass from Dom Sarle (UC Santa Barbara) that found Detelj in the top of the box, he cut to go wide, eluded the onrushing goalkeeper, but Detelj couldn’t release his shot and needed to gather the ball in the box. He loped up the end-line chipping over the goalkeeper and it deflected off an Ocean City Nor’easter – but I think it was goal bound without the deflection.

Keith Detelj
In the 37th minute, Detelj scored again. This play started with a long clearance from goalkeeper Alex Naples (St. John’s(m)) that Detelj won just as it hit the ground. He feinted throwing Nor’easter defender Chris Williams off stride. Detelj took one more touch before he slotted the ball past the goalkeeper from 10 yards.

Detelj employs feints to gain space. He’s quick and could have scored a third goal in the first half, but his chip was just wide. In the 19th minute, Sarle fed him again (sound familiar?).

Thomas Wharf (Connecticut) is strong in the air.

Jimmy Nealis (Georgetown) had less defensive responsibilities when Terry Gibbs (Bloomfield D2) went more centrally after Jeff Pio (La Salle) left the game in the 28th minute. Nealis had several dangerous crosses into the box. In the 65th minute, he demonstrated his exceptional dribbling up the left side. Then, late in the half, he blocked consecutive shots from Dwayne Dove (Vermont) and Jack Bailey (Limestone D2) to stifle any opportunities.

The central midfield of Tyler Arnone (Michigan) and Ben Arikian (Massachusetts) maintains possession exceptionally. Both of them move off the ball and are adept at calming the ball instantaneously. At times, both of these players are caught up field, exposing their backs. However, late in the second half, both were committed to getting back.

In the 67th minute, Arikian noticed that right back Joe Posillico was caught up field. Arikian filled his position until he got back. Smart.

Arnone played brilliantly – he goes hard to every free ball. I like the way he plays. In the 78th minute, he transitioned quickly driving a ball down the line to Jimmy Mulligan.

Adriano Gabriele (Seton Hall) hit a 35 yard free kick that goalkeeper John McCarthy (La Salle) punched (instead of catching). Mark Secko was able to recover, skip around a defender and crush a shot that McCarthy had to tip over for a corner kick. In the 13th minute, Secko tried to tee the ball up in the box and was dispossessed.

Dom Sarle (UC Santa Barbara) likes to start deep in midfield, attempting to be unmarked as he gets forward. He turns quickly, getting his head up and initiating the attack. In the 30th minute, he received a ball from Gabriele, dribbled past his defender, while straddling the end-line looked for an option to cross the ball and wound up crossing through the box. On another note, Sarle needs to quit his petulant attitude and just play the game – stop the drama.

While Guy-Roland Kpene was adept at holding the ball, he is very static.

Shane Arikian was much more effective on the bench.

In the 69th minute, Dwayne Dove (Vermont) gave Ocean City hope scoring the first goal. Dove was able to intercept Long Island’s Stephan Barea (Hofstra) pass. He dribbled into the box, stuttered, small touch, fake a shot before putting the ball through traffic into the goal. 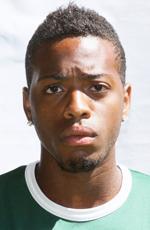 Dwayne Dove
In extra time, Kevin Curran (Loyola (MD) (m)) threw a long ball into the box that bounced once and was headed in by Jack Bailey (Limestone D2) at the far post 3 yards from goal.

Terry Gibbs (Bloomfield D2) is the class of this team. He flawlessly plays different positions without pause. He started as right midfielder. Gibbs was pressuring Jimmy Nealis with his quickness and guile. When Jeff Pio left the game, Gibbs moved to central midfield and caused problems for Long Island centrally. He is extremely calm on the ball. In the 25th minute, Larry Mahon (Limestone D2) got the ball to the sideline where Gibbs made an outstanding first touch before crossing the ball dangerously into the box, but Zachary Kupfer (UNLV) was able to touch it away.

Bailey has a tendency to pop the ball up if it has the slightest bounce. Additionally, he doesn’t effectively run off the ball. For example, in the 60th minute, Byron Carmichael dispossessed Ben Arikian (Massachusetts) from behind and Bailey ran alongside Carmichael. I would have preferred for Bailey to run to the corner to open the space toward the middle. This would have prevented Carmichael to be trapped on the sideline. With Bailey’s big body, he’s able to flick the ball in dangerous positions. In the 83rd minute, Bailey flicked the ball toward Carmichael but Wharf made a tremendous defensive play to stop the play.

Carmichael uses his body well to increase his advantage in the attacking third. He’s strong and quick. In the 80th minute, Mahon put a deep diagonal onto Carmichael’s head, but his shot was just wide. If Ocean City hadn’t tied the game, Carmichael would have worn the goat horns by missing this open 8 yard header – he needs to bury those chances.

Newly acquired Chris Williams was a good addition to the Ocean City team. He’s confident on the ball and understands body positioning to gain defensive advantage. He’s like the defensive Byron Carmichael. Not surprisingly, communication between Williams and Kevin Strunk (Lehigh) was problematic at times.

Strunk is powerful in the air. I’m not sure that he has the foot speed for the next level, but it’s something to watch in Strunk’s senior season.

Junior Chapman’s best asset is his recovery speed in the 10th minute getting back on a breakaway. He doesn’t add much in the final third.

Giancarlo Granese (La Salle) has a confident first touch; although I’m not as confident about his defensive prowess.