PDL aims to maintain momentum in 2017 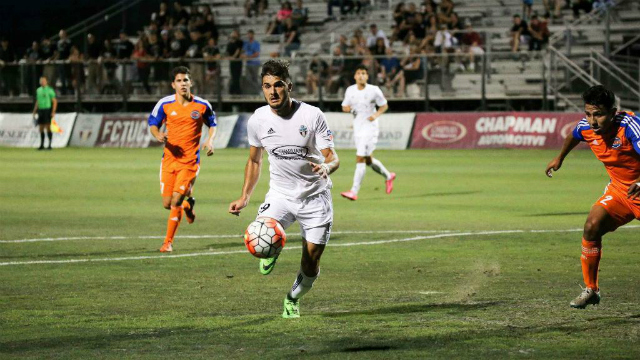 As the USL continues to expand its footprint on the U.S. Soccer landscape, the league’s PDL arm seeks to emulate that ahead of a new season.

Set to kick off this weekend on May 5, the latest iteration of the Premier Development League will reprise its central role: a league of mostly amateur players that serves as a development opportunity for some of college soccer’s elite talent.

While the 72-team league echoes plenty of the same patterns of the past, PDL Director Todd Eason is excited for the new teaks and additions that will be implemented this year.

“We’ve got 16 new teams, some great ownership groups that have come on board, and I’m excited to see how they perform,” he told TopDrawerSoccer.com in a phone interview. “We’ve had a lot of success with a few of our teams last year in their first season and we’re hoping that continues to be contagious and these new teams will come on and do the same.”

Driving player development and living up to the league’s “Path to Pro” motto is once again central to the upcoming campaign. Currently, 368 players in the USL have experience in the USL, and more than 220 in the MLS. A number of the best college soccer players will take the field for various PDL franchises this summer.

The league is seeking to promote its Scouting Network, recently unveiling a list of 23 scouts that will be keeping a close eye on players around the league. Using its website, the team tracks and promotes prospects competing throughout the summer.

But Eason also says that the league is focused on beefing up sustainability off the field, through a variety of avenues.

“We’re doing a lot more [to emphasize] how teams are operating year after year,” he said. “The standard of the PDL has always been a huge focus, and making sure all of our teams are operating the same way but also the consistency of how we operate is very important to us. We’ve got a lot of things in place as far as educating teams on how they should be operating from a marketing standpoint, sponsorship, ticket sales and so forth. We’re doing a lot more as far as staying in tune with our teams this upcoming year to help them and hopefully that turns around and helps them to generate some revenue.”

One of the new franchises this year will be unlike any other. Montverde Academy will own and operate the SIMA Aquilas in Florida, featuring a number of intriguing players. That includes a blend of former SIMA standouts like Bruno Lapa (Wake Forest), Malick Mbaye (Clemson) and Thales Moreno (Clemson), and current high school players such as Kizza Edward and Caua Soares.

Eason is excited to see them in action.

“What Montverde brings is that high school level, and it’s not just high school, but an elite level of proven players that have come through there and moved on to professional level and gone straight into, a lot of them are playing in USL,” he said. “It’s a unique platform for our league and one that guys are coming into to get a high school education and see if they can make it to the professional level. It’s a different kind of ownership group, they have proven success in every aspect of the game there, and I think it’s going to be fun to watch them, because there are a lot of unknown players that a lot of our scouts have no idea about.”

Of course, leaning on college players as key pieces to rosters creates plenty of challenges for PDL teams and coaches.

“You’ll see a lot of the NCAA players, they won’t come in until possibly the third week of May even though they’ve already been playing for two weeks,” Eason said. “I know a lot of our teams structure their schedule so that they’re playing later, which then compacts their schedule even more by trying to play 14 games in two and a half months. I know strategically, depending on where they’re recruiting players from, teams might move their games back a little bit later so that they can get this player to come in.”

Regardless, Eason is confident that teams will once again rise to the occasion and produce entertaining soccer this summer. He is optimistic the league’s exposure will continue to grow, and said that they are looking for more ways to distribute games online.

One way to do that is via the U.S. Open Cup. PDL teams are slated to enter that competition next week, and a deep run would create opportunities for the league and players.

“We want to see a team successful and get national exposure by playing a professional club,” Eason said. “I think that’s great for the player, great for the club itself to get that notoriety.”

Once a player in the PDL back in the 90s, Eason is excited for another season, to sit back and see the league continue to attract the level of players that has helped it evolve to where it is today.

“The thing that I’ve seen with it, especially as a player, is that it’s continued to get stronger as far as the players in it,” he said of the league’s improvement. “More and more elite players are recognizing that they’re needing PDL to continue their development and continue to get sharper, to prepare for college or whatever their next step will be. A lot of elite players are recognizing the PDL is where they want to be.”