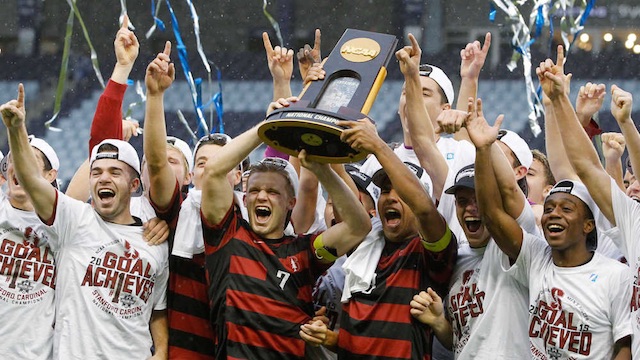 Dark horses, favorites and everything in between. The 2016 men’s DI tournament has a little something for everyone.

Every year we predict the tournament, and every year is invariably the same: the madcap realities of the NCAA tourney dash our carefully manicured picks and make them look like sheer guesses. Which they are, to a degree. But they’re also poured over after a season spent watching, digesting and pontificating. It’s simply a reality of the tourney that it tends to go the opposite direction you were thinking.

Indeed, in two of the last four years, the No. 16 seed - the lowest possible seed in the field - won the tournament. And last year No. 8 seed Stanford took the crown. In fact, it’s been five years since the top overall seed won the whole thing.

So with all those caveats, it’s time I unveiled my picks for the tournament. I’ll do a bit of explaining in each round and give you some context for why I went the way I went. These will invariably be wrong in certain sectors, but that’s the fun of the tourney. You never really know, do you?

While you play along, be sure to go check out our bracket here and fill out your own.

Quarterfinals
No. 9 North Carolina 2-1 No. 1 Maryland

Yes, Maryland is undoubtedly the favorite to cruise all the way, and they've earned the benefit of the doubt with their unbeaten record. But I think North Carolina has the horses to surprise some people this tourney. I don't see too many surprises in this quarter with the separation between the haves and have-nots being more pronounced than anywhere else. But I have to think there's a massive surprise at the end of its rainbow in the form of the Tar Heels. But we'll see.

My biggest upset in this sector involves Vermont a tremendously productive team that has a livewire creator in Brian Wright. I think Vermont beating Rider is no real upset, but Virginia is there to be beaten. Of course the Hoos have a rich tradition of grinding out wins this time of year, but I think the tourney magic will help the Catamounts. It's tremendously difficult for teams to reach back-to-back College Cups, but I think Stanford has the horses. Meanwhile, Louisville has a recent history of losing early in the tourney, and UCLA is a tough matchup.

There's something about Washington that screams postseason to me. They're typically resolute defensively, but they have a cadre of really interesting attacking pieces that make them, to me, a lot more dangerous than a typical No. 11 seed. Clemson is the big dog in this quarter, but I think Washington can grind them down and get the result. Elsehwere, I think this is a fairly normative group of games. Not a ton of upsets in the bag, I don't think.

The only bracket I've picked the highest seed to emerge into the College Cup. I think this is a soft draw for Wake Forest, which will watch the other half of this quarter beat itself up while it has a relatively easy road into the quarterfinals. That doesn't mean getting to the College Cup will be easy, per se, but I think the Demon Deacons pull it off. The story of this group might be Michigan State, which had a good run in the Big 10 tourney and is one of those typically scary postseason teams with sturdy defense.

I think North Carolina is a team of destiny in this tourney (now watch the Tar Heels lose their first game). They spent half the season at No. 1, and a shaky finish obscures how good this team really is. I think they'll have a tough go of it to get here - tougher than any team in the field - but that tends to solidify teams. Look at what a No. 16-seeded Virginia did in 2014. Of course the tourney could go in one of a million different directions, but I think this is a decent bet.