While most college programs went into summer break in late May, California men’s soccer had the opportunity to take on some of the emerging stars of one of the best leagues in the world.

The Golden Bears embarked on a trip to Italy on May 26 that lasted two weeks and included five games against primavera (U20) squads from some of the top clubs in country. 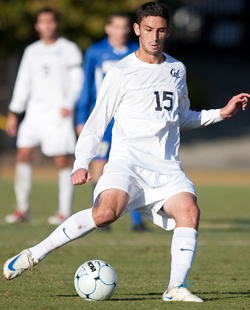 “Overall, it was fantastic on a number of levels,” Cal head coach Kevin Grimes told TopDrawerSoccer.com “The competition was great. These are 18, 19, and 20 year olds who are right on the doorstep of the first team and some of them have already made first team appearances.

“We were stretched to the limit in every game. The best part was the amount of exceptional players on the other side of the field. ”

The Bears finished the trip with a wins against Siena and Novara, draws against Fiorentina and Atalanta, and a loss against Roma.

“The results were very good,” Grimes said. “We played better as the trip went on. The first game was against the best team and we had only been off the plane for a couple of days. We were definitely feeling the effects of travel, but the experience helped us.”

The coach went on to say that Roma, the opposition for the first game, was at the top of the table for the primavera squads and included a few first team regulars.

“Cool highlight of the trip was in the game against AS Roma, Nicolas Burdisso played.”

Burdisso, who played for Boca Juniors and Inter Milan in the past, was a member of the national team at the 2010 World Cup and the gold medal winning squad at the 2004 Olympics.

The 31-year-old was using the games with the youth team as part of his rehab for a knee injury.

Grimes and his staff are hoping that the unique cultural experience of visiting another country will help this young team heading into the 2012 season.

Last year, the Bears replaced eight starters from the previous season and did not have a senior on the roster.

“We were a team of three classes, it was an unique dynamic.”

Now, with every player from last year’s team returning, there is reason for the Berkeley faithful to believe the positive showing in Italy is a sign of things to come.

This offseason has also been exceptionally encouraging for a couple of players as well. Sophomores-to-be Seth Casiple and Dean Christian have been given looks with the U.S. U20 Men’s National Team.

“Hopefully, they continue to get looks,” Grimes added with pride.

Josh Pacella started 10 games as a freshman at Liberty University last fall, a great sign for his future with the program, but you won’t see him there in 2012.

Pacella left the Flames in December and joined Misano FC, an amateur club, in Italy.

“It was an excellent opportunity for him,” Dave Pacella, Josh’s father, told TopDrawerSoccer.com. “It is a high level of soccer and they turn out a lot of guys to pro soccer for clubs in Serie A and Serie B.”

The goalkeeper first had the chance to go on trial with Misano in early 2011 thanks to a connection between Mike Moyer (a coach who spotted him) and Tosh Ferrell (the former Head of International Football Development at Everton FC).

Ferrell watched a few high clips of Pacella and knew he had potential.

“After a couple of hours, Tosh [Ferrell] called and asked if Josh could go on trail,” Dave Pacella said.

Misano FC liked Pacella, but space for non-EU players is especially limited in Italy even for players over 18 years old.

However, via his father, the keeper from Pennsylvania qualified for Italian citizenship and received it in December.

“He left right after Christmas and played half of the season in Italy,” Dave Pacella said. “He started for the junior team and is the reserve keeper for the first team. The club has indicated that the starting keeper is leaving for a professional opportunity after this season.”

The 20-year-old has the chance to assume the starting role at Misano, which came close to promotion to the Serie D, the highest level for amateur teams in Italy, this year. Misano, which is a coastal town located near Remini, lost out in the final game of the promotion/relegation battle and will be back in Eccellenza B next year.

If the chance in Italy does not work out, Pacella has not lost out on his amateur status and could return to college soccer.

On Tuesday, Colorado Rapids announced the signing of second Home Grown player Shane O’Neill. The midfielder has appeared numerous times with the Rapids reserve team this season, as well as scoring 10 goals in 15 appearances with the U18 Academy team in the USSF’s Development Academy.

O’Neill had previously committed to Virginia, and was expected to be a key piece for the ACC program in 2012.

Kekuta Manneh, the Gambian goal-scoring machine, is currently on trial with LA Galaxy, according to ESPNLA. Manneh is currently a member of Austin Aztex of the USL Premier Development League. He has six goals in six games this season.

The 17-year-old earned his national acclaim last season with 35 goals in 23 games while playing for the Texas Rush in the Development Academy.