There were plenty of worthy candidates this week for top honors on the TopDrawerSoccer.com Player and Team of the Week list, but it was Rutgers sophomore Mael Corboz who stole the show with his eight-point performance.

The midfielder was instrumental in wins over South Carolina and Princeton over the course of the past week. 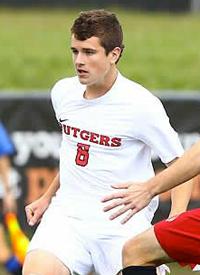 While he takes the spotlight, he’s just one of the 11 who made the TDS Team of the Week following the third week of the season.

GK: Chris Glodack, Clemson: The redshirt sophomore made seven saves for the Tigers on Saturday in a 1-0 win over NC State. It was the second shutout of the season for Glodack, who is splitting time in goal with Andrew Tarbell for Clemson this season.

D: Casey Osborne, St. John's: Played 180 minutes over the weekend in a pair of shutout victories for the Red Storm over South Carolina and West Virginia. Osborne and St. John’s take a four-game winning streak into the start of conference play this week.

M: Magnus Thorsson, Winthrop: The defensive midfielder notched his first goal of the season against Stetson and then had an assist in his next game against Mercer. He started the week with a 110-minute performance against East Tennessee State that helped Winthrop earn a point on the road.

M: Trevor Morley, Cal State Northridge(m): Named the Defensive MVP of the 2013 TLC Plumbing, Heating & Cooling Lobo Invitational after helping the Matadors to a pair of wins against Central Arkansas and New Mexico. The central midfielder was key to the Matadors’ game plan against the Lobos on Sunday as he disrupted the New Mexico attack on a number of occasions.

M: Leo Stolz, UCLA: Scored his first goal with the Bruins on Friday in a 1-0 win over UC Santa Barbara. He followed that up with his second goal on Sunday in a 3-2 overtime win over San Diego. Stolz also had an assist in the victory over the Toreros.

M: Matt Lagrassa, Cal Poly: Scored his first goal of the season on Friday to help the Mustangs to a come-from-behind win over Penn. He followed it up with a brace on Sunday in a 6-1 thrashing of San Jose State.

M: Mael Corboz, Rutgers: The sophomore midfielder had three goals and two assists over the weekend. He scored twice in a 3-2 win over Princeton and followed that up with the game-winner against South Carolina.

M: Mark Gonzalez, Evansville: The sophomore midfielder scored with 29 seconds left in double overtime to lead the Purple Aces to an upset win over Saint Louis. Gonzalez followed up that performance with two goals against George State(m) on Saturday including the game-winner.

F: Larry Ndjock, Loyola (MD): Scored the game-winners against Quinnipiac and Campbell last week to help the Greyhounds improve to 4-0-1 on the season. The sophomore striker has six goals on the season.

F: Eric Stevenson, Akron: The senior scored twice on Sunday to push Akron to a 2-1 win over San Diego State. It was the first multiple-goal game of the season for the Zips, which improved to 4-2 on the season.

F: Joey Calistri, Northwestern: The sophomore forward scored four goals on his way to the NIU Tournament MVP honors. Calistri and the Wildcats improved to 4-1-0 on the season after victories over Green Bay(m) and Butler.