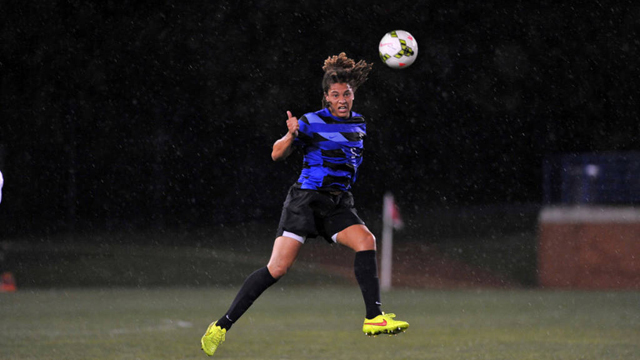 The college soccer season continues to shine the spotlight as some unexpected places. While certain teams have had a surprise run to start the campaign, the top individual performances have also been a revelation with new faces stepping forward.

This week’s Team of the Week highlights some of the top efforts from the past week in Division I men’s soccer.

GK Sven Lissek, Furman – Lissek made seven saves in a 1-0 win over Coastal Carolina for the Paladins. Lissek has three shutouts on the season as Furman improved to 4-1 on the campaign.

D Biko Bradnock-Brennan, Charlotte – Charlotte picked up wins over UNC Greensboro and Winthrop over the course of the past week. Both victories came via shutout thanks to the standout play of Bradnock-Brennan and the Charlotte defense.

D Tyler David, Saint Louis – David scored the game-winner against Louisville last week as the Billikens shut out the potent Cardinals attack in a 1-0 victory. David also logged all 90 minutes in a 3-1 win over Evansville later in the week. Saint Louis held Evansville to only two shots on goal during the game.

M Connor Hallisey, California – Hallisey scored two goals and recorded two assists in a 6-1 win over Cleveland State on Friday. He added another assist on Sunday in a 1-0 win over Gonzaga. The senior midfielder finished the week with seven points from two games, which were both wins for the Golden Bears.

M Joe Dipre, Delaware – Delaware improved to 6-0 on the season thanks to Dipre’s timely scoring over the weekend. The junior midfielder had the game-winning goal in both of the Blue Hens’ victories over the weekend. Dipre struck against St. Peter’s and Seton Hall.

M Devon Fisher, VCU – VCU pulled the upset over local rival Georgetown on Friday. Fisher was the key piece for the Rams as the junior midfielder had a goal and an assist in the 2-1 overtime win on the road.

F Bradley Farias, Campbell – The Fighting Camels improved to 3-0 on the season thanks to freshman striker Bradley Farias who had two goals and an assist against Stetson in a 3-1 win. Farias leads the team in goals, points, and shots at this early stage of the season.

F Akeil Barrett, Tulsa – Barrett snapped Creighton’s shutout streak to start the season at 413 minutes. It took a splendid individual effort to break through the Jays defense. Barrett raced over half the field with the ball on his feet as he beat two defenders and then passed the ball into the back of the net.

F Jamie Dubyoski, Navy – Dubyoski had a five-point week with two goals and an assist in two games. Dubyoski scored the game-winners against Maryland and Central Connecticut.

F Devonte Small, Oregon State – It was a banner weekend for Small, who scored the game-winner against previously undefeated Siena on Friday. He tallied the equalizer against Duquesne, which the Beavers went on to win. Small was named to the All-Tournament team for his contributions in the two games.