TDS Team of the Week: Stars shine in Conf. 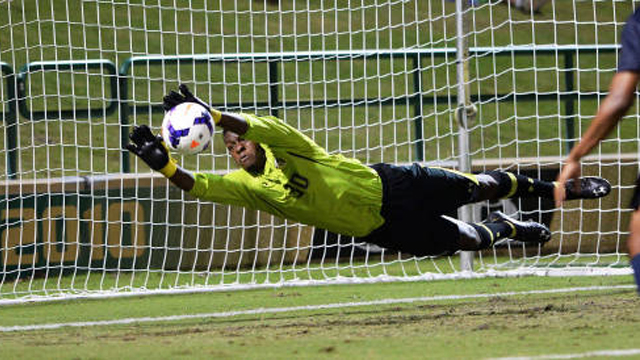 Conference tournament time is full of noteworthy performances as teams vie for automatic berths to the NCAA Tournament. The past week was no different with just about every position on the field having some role on the path to success for teams that earned the right to keep playing into late Nov.

This week’s TDS Team of the Week is highlighted by a goalkeeper performance for the ages. South Florida senior Brentton Muhammad made 10 saves on Sunday against Connecticut in the AAC Championship game to send the fixture into a penalty kick shootout. Muhammad then stopped three shots in a row in the PK shootout to help the Bulls win 6-5 in PKs and clinch the automatic bid to the NCAA Tournament.

Check out who joined Muhammad on the Team of the Week below.

GK: Brentton Muhammad, South Florida – In total, he made 15 saves in three games in the AAC Tournament, as he led an improbable run for the Bulls to the championship after going 2-2-4 in conference play during the regular season. Muhammad’s three saves in PKs helped the Bulls overcome the play of Connecticut goalkeeper Andre Blake who had a great game as well.

D: Thomas Allen, Charlotte – The senior defender anchored the 49ers defense that only let in one goal on the way to the Conference USA Tournament Championship. Allen was named the C-USA Tournament Defensive MVP for his work over the three games.

D: Michael Gallagher, Washington – The sophomore had the lone assist in the 1-0 win over Oregon State on Sunday that helped the Huskies clinch the Pac-12 crown. Gallagher played all 90 minutes in the shutout victory over the Beavers.

D Nate Hodges, East Tennessee State – Hodges was named the MVP of the A-Sun Tournament after leading the Bucs to the title with wins over Lipscomb and North Florida. Hodges scored the first goal in the 3-1 win over North Florida in the championship game on Sunday.

D Nicky Yin, Penn – Yin tallied the game-winning goal against Harvard on Saturday, which led Penn to the Ivy League championship and an automatic berth into the NCAA Tournament. He was also a key piece of the Penn defense that held Harvard scoreless.

D Mark Dotseth, Loyola Marymount – Dotseth delivered the assist on the game-winning goal on Sunday that helped LMU clinch the West Coast Conference Championship. The defender played 89 minutes on the way to the 1-0 win over Santa Clara.

M Eric Stevenson, Akron – Stevenson scored twice in a 3-0 win over West Virginia in the semifinal round of the MAC Tournament. He added an assist in the final as the Zips cruised to a 4-1 win over Western Michigan.

F Adam Lysak, Marquette – The redshirt senior scored the game-winning goal in both the semifinal and the final of the Big East Tournament for the Marquette Golden Eagles.

F Pete Caringi, UMBC – Caringi broke out of his scoring slump in a big way with two goals on Sunday in a 4-0 win over Hartford to help UMBC capture the America East Championship. Caringi was awarded the Most Outstanding Player of the tournament for his contributions.

F Patrick Mullins, Maryland – The senior set up the game-winning goals in both the ACC semifinal and final as the Terps captured the crown in their final season in the conference.