Next up, a look at ten of the best midfielders in men’s college soccer – in no particular order:

Fifi Baiden, UC Santa Barbara, Senior: There are few players as disruptive as the Gauchos starting defensive midfielder. Baiden sits in front of the back four and protects UCSB from counterattacks, as head coach Tim Vom Steeg’s system depends on getting his outside backs forward into the attack. Over the course of his three seasons with the Gauchos, Baiden has played in 59 games and started 47. He has only missed one start in the last two seasons. 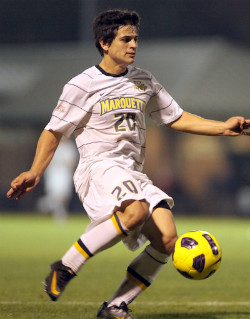 Michael Calderon, New Mexico, Senior: Prior to his transfer to New Mexico in 2012, Calderon had three goals and one assist in 32 games with Fairleigh Dickinson over two seasons. Last season, he had four goals and eight assists in 19 games with the Lobos. Chalk it up either to more talent around him or a better system for his style of play, regardless, the Costa Rican is flourishing with the Lobos and is in for a standout campaign in his final collegiate year. Calderon has the skill and vision to keep this Lobo attack rolling despite the losses of Blake Smith and Devon Sandoval to MLS. With James Rogers in the attack and Calderon pulling the strings, the Lobos attack will still be dangerous.

Bryan Ciesiulka, Marquette, Senior: Listed five-foot-four, Bryan Ciesluka is the shortest guy on the Marquette roster, but he is the biggest guy in that locker room. The Chicago Fire Homegrown candidate is the engine behind the emergence of the Golden Eagles soccer program. With five goals and nine assists to his name last season, Ciesluka finished in a tie for second on the team in points. His soft first touch and quick thinking have allowed him to skate past stronger defenders over the years. He will need to keep evolving his game, as more teams become aware of the hidden gem in Milwaukee.

A.J. Corrado, Indiana, Senior: There are multiple midfielders from the Hoosiers who earned consideration for this list, but it was Corrado’s offensive exploits last season that gave him the edge. The Indiana native returned to his home state after a solid freshman campaign with SMU in 2010. Over the last two seasons in Bloomington, Corrado has scored three goals and dished out 16 assists. With Eriq Zavaleta’s early departure to the professional level, more weight will be put on Hoosiers #10 this fall, but he certainly looks up to the task.

Fabio Pereira, Michigan, Senior: There are few players in college soccer who wear the #10 jersey with more style than Fabio Pereira. The Brazilian-born midfielder was a terror for opposing defenses during the twilight of last season. With another few months of coaching from Chaka Daley and his staff, it must be scary to think of what Pereira could be capable in his final season for the Wolverines.

Danny Garcia, North Carolina, Sophomore: While a strong argument could be made for Garcia’s inclusion as a forward, his versatility allows him to play in the midfield or up front, and he’s a dangerous attacker no matter where he is on the field. While he is undersized, Garcia has pace, technical ability that allows him to dominate from anywhere he lines up.

Collin Martin, Wake Forest, Sophomore: Another midfielder with impressive technical ability, school conflicts kept Martin off the U20 Men’s National Team qualifying roster, and he’ll look to make a late push onto the World Cup squad. Martin logged heavy minutes as a freshman, and led the Demon Deacons with six assists on the year.

Alex Martinez, NC State, Senior: The attacker started off on fire last season, at one point leading the nation in goal scoring before tailing off by season’s end. Still he finished the season with 11 goals and 10 assists in his first season since transferring to NC State from High Point. Pressure will be on to prove his quality and show that last year wasn’t just a one-off.

Aodhan Quinn, Akron, Senior: Another attack who has made significant strides in his development at the college level, Quinn will shoulder much of the offensive load for new Akron head coach Jared Embick in terms of sparking the team creatively. Fortunately for the Zips, he’s more than capable of it, despite rather low points totals of four goals and three assists. A player with a refined soccer brain and excellent touch, Quinn will get another chance to show pro scouts he has the right tools for the next level.

Pedro Ribeiro, Coastal Carolina, Senior: This deep-lying central playmaker was linked to a move to MLS by some media reports, but is staying in school for a final year and to continue his ascension as one of the best central midfielders in the college game. His tall, 6-foot-3, frame helps him stand out on the field no matter where he is, but he also manages to do that with the ball at his feet, able to spray passes all over the field with ease.

*UPDATE (May 20): Chris Ritter, Northwestern, Senior: The 2012 Big Ten Defensive Player of the Year was overlooked in the original list released on May 17 due to an oversight. However, Ritter rightfully deserves a place among the pantheon of midfielders in college soccer. He has been the driving force of the Evanston, Illinois program with his sharp skills and cunning vision. The Chicago Fire Homegrown candidate has 10 goals and nine assists in 65 appearances at the collegiate level. He is definitely one to watch in the Big Ten this fall, as he leads Northwestern to postseason success while playing an attractive blend of possession soccer.