MLS Academies continue to supply talent to the college ranks every year. Here's a look at some of the best performances across the country by MLS Academy alumni:

F Brandon Allen, Georgetown (New York Red Bulls, Freshman): The hulking forward started both games for the Hoyas over the last week, and opened his account on Monday, scoring the decisive goal in a 1-0 win against Florida Gulf Coast(m).

D Michael Ambrose, Maryland (FC Dallas, Freshman): Started and played a quality 90 minutes at right back for the Terps in a 3-0 defeat of Louisville. Looked very much the quality player he is. 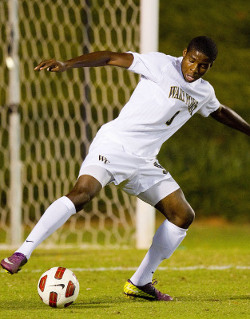 GK Keith Cardona, Maryland (New York Red Bulls, Sophomore): Cardona got the starting nod and shut out a strong Louisville side over the weekend. Moving forward, he could still juggle time in goal.

MF Ian Christianson, Georgetown (Chicago Fire, Senior): Very strong in the center of the park as the Hoyas picked up two wins, beating Virginia(m) 2-1 and Florida Gulf Coast(m) 1-0. Linked up the defense and attack very well, offered a strong physical presence and covered a lot of ground.

MF Bryan Ciesiulka, Marquette (Chicago Fire, Junior): Started and played every minute in Marquette’s two wins over the weekend against Milwaukee and Green Bay. Ciesiulka also scored a goal in the thrilling 3-2 victory over Milwaukee.

F Cole Denormandie, Cincinnati (New England Revolution, Sophomore): Scored the game-winner against Dayton on Friday, but only managed one shot on goal against Indiana on Sunday.

MF Peabo Doue, West Virginia (D.C. United, Senior): After scoring a goal and picking up assist in a 2-1 win against Hartford, Doue played 86 minutes but didn’t get on the score sheet against Stetson.

MF Uwem Etuk, West Virginia (D.C. United, Senior): The midfielder notched an assist and started both of WVU’s games over the past week.

MF Daniel Garcia, North Carolina (FC Dallas, Freshman): The U20 MNT forward didn’t get the start in his college debut against Gardner-Webb but he made his impact from the bench, coming in to set up two goals in a 4-0 win for the Tar Heels.

F Chris Hegngi, Ohio State (D.C. United, Senior): The tall target man didn’t find the back of the net in two games, as the Buckeyes fell 3-2 to Dayton and 2-0 to UIC. It wasn’t for a lack of effort, as Hegngi managed 9 shots across the two games, only getting 3 on target.

D Brendan Hines-Ike, Creighton (Chivas USA, Freshman): The center back made his debut and played 33 minutes in the 3-1 win over Northern Illinois.

MF Dan Metzger, Maryland (New York Red Bulls, Sophomore): The midfielder came off the bench and scored a first-half goal in Maryland’s opening day win against Louisville. He’ll be hard pressed to earn a starting role this year but is going to provide valuable depth.

F Nick Palodichuk, Duke (Seattle Sounders, Sophomore): The forward played 85 minutes in his first game without Andrew Wenger, failing to find the back of the net in a 1-0 loss against Notre Dame.

MF Travis Pittman, West Virginia (D.C. United, Senior): The defensive midfielder started two games, scoring a goal in WVU’s win over Hartford, and setting up another in the 1-0 win over Stetson.

D Tyler Rudy, Georgetown (D.C. United, Sophomore): After starting and playing a full 90 minutes + overtime in a 2-1 win over Virginia(m), Rudy came off the bench in Monday’s 1-0 win over Florida Gulf Coast(m) and played on the right side of the midfield.

MF Wil Trapp, Akron (Columbus Crew, Sophomore): The defensive midfielder did his job, protecting the back line and linking play well in the Zips’ 4-0 win.

D Matt Wiet, UCLA (Columbus Crew, Senior): Not an ideal start to the season for the Crew Academy product. Wiet struggled against the physical forwards from New Mexico and let in a couple of soft goals.

D London Woodberry, Maryland (FC Dallas, Senior): The fourth year defender put in a monster performance in 90 minutes against Louisville. Woodberry was all over the place, winning balls and even storming forward to join the attack on a few occasions.

F Gyasi Zardes, CSU Bakersfield (LA Galaxy, Junior): Zardes had moments on Tuesday when it looked like he would skate past four or five defenders then score a great goal. But UC Davis did a great job surrounding him on the ball and kept him away from the net.