It’s a break from ACC play for #1 Florida State this coming weekend, as the Seminoles welcome Jackson State(w) to Tallahassee in search of a ninth straight win on the season. This is a bigger game than it might seem, as FSU then takes a trip up to North Carolina for a pair of huge matchups the next weekend.

Speaking of conference play, #2 Stanford begins its Pac 12 action this weekend. With U.S. U20 forward Chioma Ubogagu back in the fold, the Cardinal hosts Arizona State on Sunday. 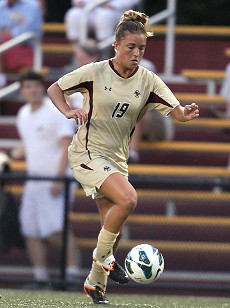 Life in the SEC for #3 Texas A&M has been swell so far – with two opening wins last weekend, the Aggies are looking good. But this weekend provides another pair of tough matchups, with South Carolina and Auburn visiting College Station.

Another top program out West jumps into its conference schedule, as #4 UCLA plays the first game of its Pac 12 slate on Thursday night against Washington State. The game marks the conclusion of a seven-game home stand.

A traditional ACC rivalry writes another chapter on Thursday evening, as the #4 Duke Blue Devils hosts #18 Maryland. Will a difficult trip to Florida last weekend leave Duke ready and willing to run the Terps off the field? So far, Maryland has shown it can hang with some of the best, beating North Carolina last week.

So how good is #11 Virginia Tech? The Hokies haven’t conceded a goal in six games, and face a pair of very difficult games this weekend, visiting #19 North Carolina on Thursday evening before hosting #7 Boston College on Sunday. If they can come away from both of those games with their undefeated record intact, it’ll be a signal to the rest of the ACC that the Hokies might find a way to finish towards to the top of the table.

Plenty is at stake as Boston College swings south to take on the Demon Deacons down in Winston Salem. Wake is coming off its second loss of the season on the road against Florida State, although Katie Stengel’s return makes this a dangerous proposition for the Eagles. However, leading BC’s strong attack is forward Kristen Mewis, who is currently third in the nation in points per game (9 goals, 6 assists) while freshman McKenzie Meehan’s 7 goals in 9 games give the Eagles a complement to Mewis in the attack.

1. It was a sensational start to the season for Iowa, winning its first nine games of the season before losing to Illinois last weekend on the road. Still boasting a very impressive 9-1-0 record the big questions facing the Hawkeyes is how the team stacks up against the Big Ten, welcoming Indiana and Purdue to Iowa City this weekend.

2. Even though it’s the early part of the conference schedule for most teams, these early matchups are certain to be extremely pivotal as the season winds down. Take #17 Marquette for example: heading on the road this weekend, the Golden Eagles visit Seton Hall and Rutgers, with each result certain to have an impact on the final Big East standings.

3. Long winning streaks are always fun to witness, and along with Virginia Tech’s undefeated start, Navy has also won nine games in a row. Either team extending that run even further is going to be extremely impressive.