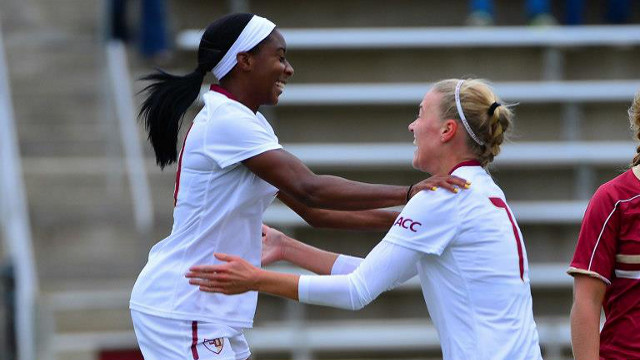 Make sure you check out our Tournament Bracket.

Three times in post-match spot kicks, Washington State players had a chance to win the contest, and three times Portland goalkeeper Erin Dees made penalty saves to keep her team alive. Then in the 9th round, Taylor Brooke converted her penalty and the Cougars’ attempt to answer went wide of the target, touching off a wild celebration by the Portland team and crowd.

Kendall Johnson and Michelle Cruz scored in regulation for the Pilots, while Brandi Vega and Nicole Setterlund tallied for Washington State.

Annie Speese and Erika Tymrak scored for the SEC champions, while Taylor Burke did not have to make a save in goal.

Kelli Hubly scored an overtime winner as the Wildcats staved off the upset bid. Kayla King recorded the shutout in goal.

Stephanie McCaffrey opened the scoring for the Eagles, and Kristen Mewis doubled the BC lead in the 80th minute. Alexa Gaul made 3 saves in recording the shutout.

After Helen Steinhauser put UWM up in the 1st half, Katie Naughton equalized just before halftime and Lauren Bohaboy put the Fighting Irish on top with a 53rd minute goal. Crystal Thomas killed off the match with a 90th minute tally for Notre Dame.

Annie Kunz scored a first half winner for the Aggies. Jordan Day recorded a shutout in goal.

Hanna Gilmore and Alex Klein scored to put Marci Jobson’s Bears up 2-0. Cali Farquharson cut the margin to 2-1, but Taylor Heatherly answered immediately to make it 3-1.

Tori Ball and Mary Nicholson scored to give the Tigers an early 2-0 lead. Lindsay Elston cut the lead to 2-1 with a 37th minute goal for the Huskies.