Women's Team of the Week: August 31 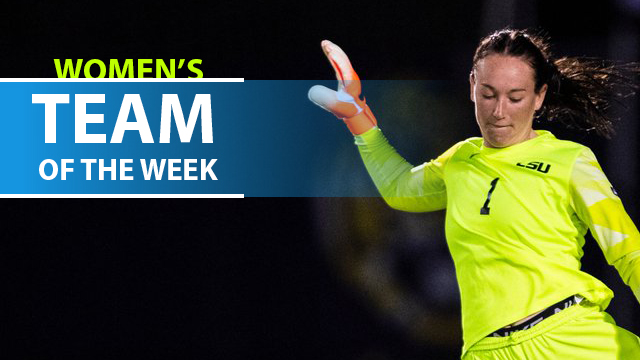 For the second straight week, the TDS Women’s Player of the Week goes to a shot-stopper.

Goalkeeper Mollee Swift earns the honors, after playing 180 minutes on LSU’s two-game swing to Florida. The Tigers picked up wins against American Athletic Conference opponents, as Swift and the LSU defense shutout UCF by a 2-0 score. They also defeated South Florida 2-1, with the only goal of the game coming from the penalty spot. She made a total of six saves in the two wins.

See some of the other top performances from the past week of women’s DI action.

GK Mollee Swift, LSU – Surging at the start, LSU now has four wins from four games; Swift has two shutouts over that stretch. A tough trip to Arizona, for games against the Wildcats and Arizona State, will test Swift even further.

D Jesse Loren, Kansas State – Along with helping secure a pair of shutouts last week, Loren was credited with a game-winning assist in Kansas State’s win over Austin Peay.

D Audrey Shea, Bowling Green – Shea was the lone Falcon to play all 90 minutes in each of BGSU’s two matches last week, at Ohio State and at home vs. Oakland. In the latter match, she helped the Falcons limit the Golden Grizzlies to no goals and just two shots on goal. She also had a couple of assists in the 6-0 win.

M Elyssa Nowowieski, Campbell – The midfielder scored two goals in two games for Campbell, including a tally versus NC State in a 1-1 draw.

M Brina Micheels, Western Kentucky – Two goals from Micheels helped Western Kentucky secure the upset win against Vanderbilt. She converted the winning goal in overtime to clinch the 3-2 win versus the SEC side.

M Frankie Tagliaferri, Rutgers – Life back in New Jersey suits Tagliaferri just fine. She scored twice and added an assist in a dominant 5-1 win against Providence this past Sunday.

M Katie Soderstrom, Butler – The Big East side scored three goals as Butler bagged two wins against Big Ten opposition. They saw off Northwestern and Illinois by 3-1 scores. It was an impressive bounce back after losing to Michigan to open the season.

F Caitlin Doran, Navy – Doran accounted for the winning goals for Navy, as they picked up wins away from Annapolis. She nabbed the lone goal in a 1-0 defeat of Towson, and then the second and decisive strike in a 3-1 win against Maryland.

F Barbara Olivieri, Texas A&M – The Aggie attack got going this weekend against Clemson, as Olivieri scored a goal and assisted the winner strike in a 3-1 win victory over a tough opponent.

F Rebecca Jarrett, Virginia – While bigger tests lie ahead of them, UVA continues to excel in the attack. Jarrett scored two goals and added an assist in Sunday’s 6-1 win over George Washington. She also setup the opening goal versus George Mason on Thursday.