Women’s Team of the Week: February 16 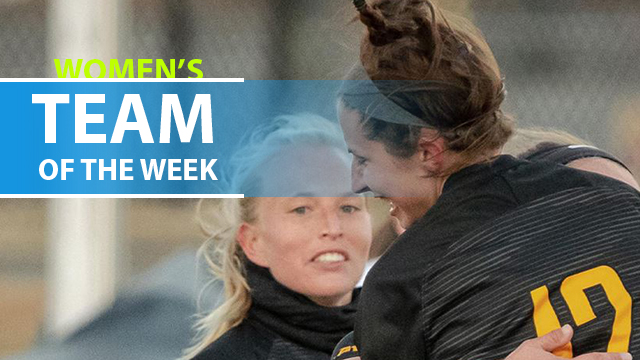 It was a fantastic opening week of competitive games for VCU.

The Atlantic 10 side played a pair of matches against Virginia opponents, and secured two victories against Liberty and Old Dominion.

Standout midfielder Samantha Jerabek played a crucial role in both wins, earning the latest TopDrawerSoccer.com Player of the Week nod. She scored four goals and added an assist in the wins, including a hat trick versus the Monarchs. In each game, she created two chances and attempted three Key Passes.

GK Emily Puricelli, Saint Louis – A four-save effort and clean sheet were crucial for Puricelli and the Billikens in a close, 2-0 win against Xavier.

D Alivia Kelly, New Hampshire – It was a winning opening match for UNH, holding off Northeastern by a 1-0 score. Kelly marshaled the clean sheet from the back and scored the winner.

D Sarai Linder, UCF – The freshman defender from Germany enjoyed a strong performance in her side’s first AAC game of the season, a 3-0 win against Temple. Along with helping keep a clean sheet, the right back notched an assist. She also completed 87% of 79 pass attempts on the day.

D Trinity Watson, Pepperdine – Watson scored a goal and led a strong defensive effort as the Waves picked up a 4-1 win against San Diego, their first win of the season.

M Samantha Jerabek, VCU – After scoring five times in the entire 2019 season, Jerabek should easily surpass that total even in a shortened season after her four-goal outburst. With the Atlantic 10 playing a regionally focused schedule, Jerabek could easily hit the double-digit goal total.

M Olivia Nguyen, Arizona State – Facing Grand Canyon twice over the past week, Nguyen played a starring role in both victories. First, she nabbed the overtime winner in a 3-2 road victory on Thursday. Then at home, she scored twice and setup another goal in a much more comfortable 4-0 win.

F Mia Fishel, UCLA – With each passing game, Fishel continues to cement her status as one of the best strikers in college soccer. She created four chance against BYU, and while she didn’t get assist, she did win the penalty that was converted by Marley Canales to tie the game. Sunshine Fontes went on to win later in the second half.

F Jaida Thomas, Tennessee – An All-Freshman Team honoree in the fall season, Thomas picked up in the spring by scoring a hat trick against Gardner Webb. The Volunteers cruised to a 6-0 victory.