Women's Team of the Week: March 2 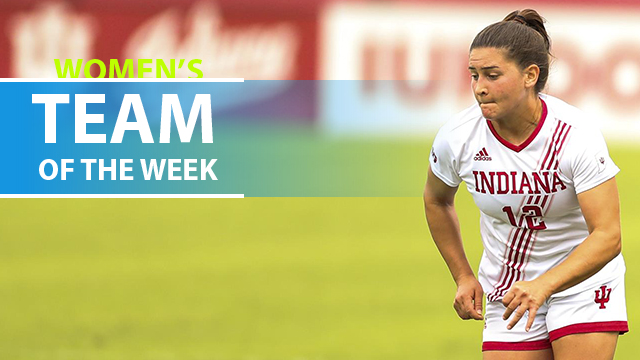 It was a massive week for the Indiana women’s soccer program.

Looking to make strides during the second season of action under head coach Erwin van Bennekom, the Hoosiers secured a pair of Big Ten victories at home.

The latest TopDrawerSoccer Player of the Week helped fire the Hoosiers to a pair of wins in league play last week. Indiana beat Rutgers and Iowa in shutout wins, as midfielder Melanie Forbes accounted for all three goals. IU beat Rutgers by a 1-0 score on Thursday, and then beat Iowa 2-0 on Sunday.

29' | @mcforbes12 with the brace as she scores her second goal this afternoon! pic.twitter.com/ZgaYuDu49L

Check out some of the other top performances in women’s Division I soccer over the past week.

D Emily Sample, Pepperdine – The senior from Texas anchored Pepperdine's 1-0 win against St. Mary's (CA), as they seek to make waves in the WCC.

D Kim Rodriguez, Oklahoma State – Along with starting and helping the Cowgirls beat Little Rock by a 3-0 score, Rodriguez picked up an assist on the first and decisive goal as the Big 12 team returned to action. She won 83% of her challenges and completed 80% of her pass attempts.

D Lucy Parker, UCLA – The Pac-12 side avoided defeat over the past week, picking up a win against Arizona. Parker played every minute of the match and helped her side hold on for a 2-1 victory. She won 74% of challenges anchoring the team in central defense.

M Thais Reiss, North Florida – A tremendous start to the season continued for Reiss, as the Brazilian scored three times in two games last week against The Citadel and FGCU. She now has six goals and two assists in four games, with UNF sitting on a 4-0 record.

M Melanie Forbes, Indiana – Adding on to her three goals, Forbes put in work on both sides of the ball, making eight interceptions against Iowa and five versus Rutgers. She suffered seven fouls as well and created one chance in each game.

M Kelli Beiler, Lipscomb – Opening ASUN play against Kennesaw State, a Beiler hat trick powered the Bisons to a comfortable 4-1 win. Two of the goals came from the penalty spot, and all three came in the first 45 minutes. Her three goals last week matches her season high, set in 2018 as a sophomore.

M Jessica Garziano, St. John's – A huge week from the sophomore midfielder saw Garziano account for all four of the Red Storm goals across two games. She scored a hat trick last Thursday in a 3-0 win over Sacred Heart, then tallied the winner from the penalty spot on Sunday to defeat UMass by a 1-0 score.

M Sam Coffey, Penn State – After slipping up in the opening match against Rutgers, Penn State bounced back over the past week, with Coffey in red-hot form. She scored and had two assists in a 4-1 win over Northwestern, following that up with a goal in a 2-0 defeat of Illinois on Sunday. The only blemish from the week came with a missed penalty against the Illini that would’ve sealed proceedings, but it didn’t prove costly.

F Nicole Douglas, Arizona State – Aside from Stanford’s losses in the Pacific Northwest, Arizona State’s upset of USC was the biggest result from the league over the past week. Douglas bagged the winner as the Sun Devils kept a clean sheet for the 1-0 victory.

F Emma Westin, California – Opening the Pac-12 schedule with a road trip to Oregon, Westin ensured that the Golden Bears were excellent out of the gate. In a 3-1 victory against Oregon State, she won and converted a penalty, and helped finish the game off with a nice bit of holdup play and finding teammate Anysa Gray in a dangerous spot for the third goal. Versus Oregon, Westin bagged the winner with a nice finish to provide the difference in a 1-0 game.