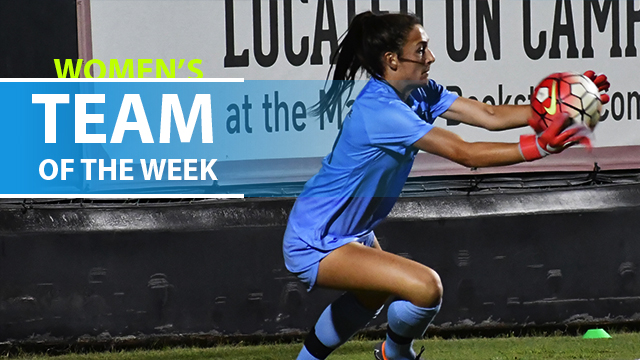 It’s safe to say that Kinsey Ehmann has made the most of her chance in the Pepperdine goal.

After entering five minutes into a match on September 1, the redshirt freshman has played every minute since. She easily had her most impressive performance last week, making nine saves against Stanford as the Waves picked up their first win of the season by a 1-0 score.

Ehmann backed that up to earn the latest TDS Player of the Week, as she played the full 90 minutes in a 2-0 win against San Diego State. The WCC side’s season is officially back on track.

Check out some of the other top performances in women’s Division I soccer over the past week.

GK Kinsey Ehmann, Pepperdine – After picking up the shutout win against the Pac-12 side, Ehmann had far less to do, facing just four shots against SDSU. With UCLA on the schedule, another big performance may be needed.

D Hannah Drkulec, Iowa – A huge start to the season continued for the Big Ten program, which now has won eight straight to start 2019. Drkulec helped keep a 4-0 shutout at home against Northern Colorado. She stepped up in a huge way on Sunday, scoring twice, including the game-winner, in a 3-2 win over Notre Dame in South Bend.

D Bryana Hunter, Arkansas – The Razorbacks knocked off North Carolina on Sunday by a 2-0 score. Hunter helped her side keep a clean sheet, playing 83 minutes at the back. She also played the full 90 in a 2-0 win against Baylor.

D Keeley Leising, Winthrop – Entering the week as one of the nation’s assist leaders, Leising picked up three helpers in a 5-1 road win. On Sunday, she setup the winning goal, helping keep a shutout in a 1-0 defeat of East Tennessee State.

M Emina Ekic, Louisville – After setting up a pair of goals in comfortable 5-2 win against Dayton, Ekic converted the winning penalty kick in Sunday’s 1-0 upset victory over Vanderbilt.

M Taylor Kornieck, Colorado – Despite coming up short on the road to Florida State, Kornieck stood out. She scored a header from a set piece to put the Buffaloes up 1-0, and tied the game in the second half from the penalty spot. Kornieck

M Zandy Soree, UCF – The senior midfielder scored the winning goals against Arizona State and Stetson, as UCF spun off its second and third straight wins of the season.

M Jenna Nighswonger, Florida State – A strong freshman season for Nighswonger took a step forward last week. She stepped up and converted a penalty kick on Thursday against Colorado, before eventually grabbing the overtime winner. In Sunday’s 5-0 victory over Villanova, Nighswonger also setup a pair of goals.

M Emma Westin, California – A surging start to 2019 continued for Westin and Cal last week. Thanks to her pair of goals and an assist, the Pac-12 side notched two more wins: first a 1-0 win over UC Irvine, and then a 2-1 defeat of Santa Clara. Westin scored and setup the winning goal in Sunday’s triumph against the WCC side.

F Madie Gibson, Monmouth – It was a remarkable trip for the Hawks over the weekend, which traveled to Austin for a matchup against Texas. Thanks in part to Gibson’s goal and two assists, the Hawks emerged with the upset win away from home.

F Brianna McReynolds, Oregon State – Speaking of strong starts from a Pac-12 program, Oregon State made it seven wins from seven games with two wins from a trip to Texas. McReynolds pave the way, with four goals and an assist against Houston and Rice.