Women’s Team of the Week: September 10 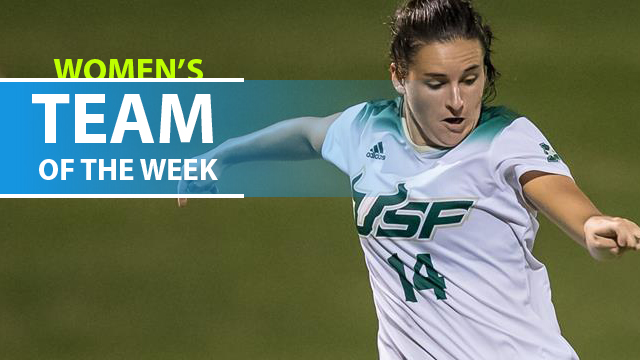 That was the case over the weekend, as Viens scored five goals and added an assist as South Florida snagged a pair of wins on the road.

Viens scored four times in San Antonio, leading the Bulls to a 5-1 win against Rice. She tallied once and added an assist in Sunday’s 5-0 victory over UTSA. The offensive performance snags the latest TopDrawerSoccer Player of the Week honors.

See who joins Viens on the latest Team of the Week below.

Team of the Week: September 2-8

GK Kayla Thompson, Brown – It was a successful return to Thompson's native Texas, who made six saves in a 0-0 road draw at Texas A&M on Sunday. She also made four stops in a 2-0 victory over Connecticut as well.

D Riley Orr, Charlotte – It was an active weekend for Orr in the offensive third, as she scored against Appalachian State, and then setup a goal in a 5-0 win over Western Carolina.

D Anna Patten, South Carolina – Life at her new school has been sublime for Patten, who returned to the Gamecocks after a stint with the English national team. She converted the winning penalty kick in a 2-0 win over Purdue, playing every minute of two shutout wins.

M Brianna Pinto, North Carolina – Pinto’s strong start to the season continued last week, as she scored the game-winning goal against LSU on Thursday. She scored twice in Sunday’s defeat of UNLV and now has six goals in six games.

M Brooke Wilson, Arizona – Another second-year player that’s enjoying an early impressive campaign. Wilson setup a goal in a win over Oklahoma and scored a goal and had an assist in a 4-0 defeat of UC Irvine.

M Roo Yarnell-Williams, Colorado – Working her way into the starting lineup as a freshman, the Northern California native accounted for both game-winning goals against Austin Peay and Baylor. The Buffaloes are off to a perfect 6-0 in 2019.

M Jaelin Howell, Florida State – The sophomore midfielder enjoyed a big weekend of her own, as Howell assisted on Friday’s game-winning goal against Florida. She also nabbed a brace in a comfortable 6-0 defeat against Samford.

F Evelyne Viens, South Florida – On the back of her five-goal outburst, the speedster now has six goals in four games this season.

F Amanda Nhek, Old Dominion – ODU is off to an unbeaten start in 2019, with a 4-0-1 record. Nhek did her part last week, with a goal and assist in a 4-3 victory against VCU on Sunday. She also tallied in a 2-1 overtime defeat of Longwood.