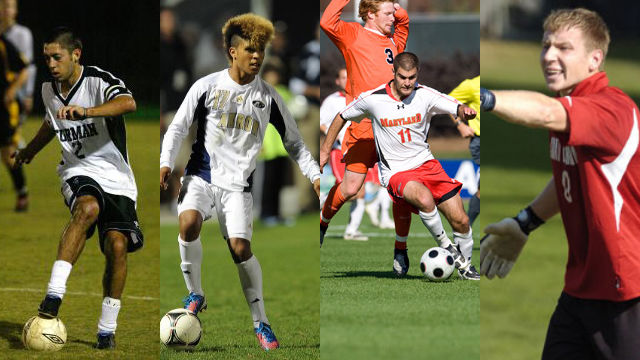 Every single one of the players on the U.S. 23-man roster for this week’s World Cup took his own unique path to this moment.

In a way, it’s a continued reminder of the scattershot nature of player development in the United States. No one path is the same as the nation is scoured for the best and brightest talent.

For some, it was a path based solely at various clubs across Germany. Others spent time at the U.S. U17 Residency program in Florida and jumped into the pro ranks as teenagers. Ten players on the final squad played college soccer, and for each of those ten, it marked an important part of his development.

Some of the college players are part of the older guard, and a different era of college soccer. Nick Rimando played at UCLA under current Seattle Sounders head coach Sigi Schmid in the late 90s. Clint Dempsey (Furman), Matt Besler (Notre Dame), Brad Davis (Saint Louis), Alejandro Bedoya (Boston College), Geoff Cameron (Rhode Island), Omar Gonzalez and Graham Zusi (Maryland) are also amongst those on the final roster who played at least a year or two in the DI ranks.

Right back DeAndre Yedlin was playing at Akron as recently as 2012, a stark reminder of how swift his rise has been. He’s the second youngest player on the roster, with only Julian Green born after Yedlin.

“I was surprised like most people [to find out he made the final roster], and we’re happy for him because he’s put in a lot of work to get there,” said Akron head coach Jared Embick, an assistant during Yedlin’s college career. “I thought they brought him in the 30 to bring up his confidence, give him some exposure, but then maybe at the end of the day go with a little more experience in the matter.”

Each player entered college soccer in different spots in his respective development arc. Some, like Bedoya, started off at smaller programs, as he began his college career at Fairleigh Dickinson before transferring to BC. Chris Wondolowski played at Cal State Chico, a Division II program. Others, such as Gonzalez or Yedlin, entered on the back of experience with various U.S. youth setups.

South Carolina head coach Mark Berson, who coached goalkeeper Brad Guzan, recalls a player who was ready to step in right away when the program brought him in back in 2003.

“He was a very highly recruited player out of high school, clearly a guy we knew who could come in and contribute right away as far as helping us in goal,” Berson told TopDrawerSoccer.com. “He was very, very comfortable with the ball, which was unusual and a great quality for him.”

Current Furman assistant coach Anthony Esquivel played four years at Furman, overlapping two years with Clint Dempsey. He remembers a young kid stepping on campus in 2001 with a chip on his shoulder, a bit rough around the edges, ready to try anything and everything on the ball. Dempsey wouldn’t stand down to anyone in practice, getting into the odd scuffle, deferring to no one whether it was a coach or teammate.

“We knew he was special, he showed flashes of it,” Esquivel said of Dempsey. “He would do things just in little 5-v-2 games, he was doing almost And-1 style soccer. He was doing these tricks that we had never seen, but not only that he was doing them in practice, doing things that we would never have the confidence to do because we didn’t want to lose possession. Whereas Clint didn’t care, he was going to do it and try to [nutmeg] you and try to do the snake, which was the big move back then which he would perfect in practice and we would be amazed.”

Dempsey’s rise from a youngster in Nacogdoches, Texas, to a Premier League contributor and U.S. national team captain is a well-documented saga. It’s perhaps a little less similar to the others.

Graham Zusi and Omar Gonzalez both entered College Park, Maryland within a year of each other, coming off the back of decorated club careers. Zusi’s college career began in 2005, and Gonzalez’s in 2006. Both would leave school with at least one national championship (Zusi finished with two) but Maryland head coach Sasho Cirovski said that the pair were very different coming into college.

“Graham is a very shy, very humble person that loves the game and was very low maintenance on the field,” Cirovski said. “Omar is a very out-going, gregarious, happy, bubbly kid, wants to be the center of all the jokes and all the fun stuff, so you have very two different personalities. Omar probably had a little more growing up to do when it came to the social life and had to catch up more on the physical demands. He’s a kid that in his first year he couldn’t make it through a 90-minute game as a center back, which isn’t the most demanding position on the field.”

Before Yedlin arrived on the Akron campus in 2011, he had spent time playing as a defensive midfielder for the Seattle Sounders Academy. Current Portland head coach Caleb Porter, in charge of Akron at the time, worked with Yedlin in a U.S. U18 MNT camp, and thought the Seattle native had potential at right back.

Yedlin eventually made the move to that spot in the last half year in the Sounders Academy setup, so when he first came to Akron, a lot of what he had to work on was part of learning a relatively new position.

“We always liked him going forward, and always tried to help him on the defending side of things, specifically positioning, when he needs to go forward, when he needs to stay back,” Embick said. “Still some of the things that you see in him today that he needs to improve on, which I think will come with experience.”

The former Zip wasn’t the only player to change position into college, as Cirovski had plans to transition Gonzalez from forward to center back, which made sense for a kid with a huge, 6-foot-5 frame. That didn’t mean it was smooth, as there was still plenty Gonzalez had to learn both on and off the field.

“Omar just needed to be pushed and challenged to get the most out of what he can give,” Cirovski said. “I think sometimes things came easy for him because of his physical gifts but he wasn’t maximizing what he had, and we got him to understand what that is going to mean.”

While all of these players had different traits heading into their college soccer careers, there was a common theme echoing through their DI careers: demonstrating skills and abilities on another level than most of their peers.

Guzan quickly adapted to a new level, and became the nation’s best goalkeeper. Dempsey’s time at Furman was a harbinger of how the rest of his career would unfold. First coming off the bench as a reserve, he eventually became a critical offensive figure in the midfield, forming a dynamic duo with Ricardo Clark, an experience that almost mirrored his time with the Revolution, Fulham and Tottenham. Yedlin’s burning pace was a huge weapon in Akron’s possession game, while Zusi set piece and scoring ability proved a critical weapon in helping the Terps capture 2005 and 2008 national titles.

Equivel specifically remembered Dempsey’s work ethic was unlike anything he’d seen at that level.

“When 99 percent of the team was out being college kids, we’d drive by the stadium Friday night at 9 p.m., and the stadium lights would be on, and there would be rap music blaring out of the stadium and you’d see Clint with 20 balls, juggling, doing moves and finishing,” he said. “I remember honking and yelling at him: ‘Clint, what the hell, we’re going to a party,’ and he would just be out there. For us, that was pretty rare to see at that time, just somebody who was flat out training on his own, because we were all established soccer players, we had our fill of soccer everyday, and he didn’t have that. He would go and do more than anyone I’d ever seen.”

Berson, while acknowledging that Guzan had the physical tools with his frame and athleticism to succeed, thought that it was the goalkeeper’s demeanor that set him apart and on a path to the Premier League.

College accomplishments are one thing of course, as there was still plenty for each player to prove in order to eventually end up on the radar of the U.S. men’s national team. That’s an element that varied with each player and the team he ended up with, and for Graham Zusi, Sporting KC ended up being the final piece of the development puzzle.

“I’m very pleasantly surprised to where Graham has gotten,” Cirvoski said. “I think he had a slow start in MLS, had an injury at the beginning, he was on a development contract his first year and I credit Peter Vermes and Sporting KC with the patience they showed in him because it takes Graham a little while to get comfortable and really exert his abilities. I realized that at Maryland that he was someone that needed to feel comfortable and confident.”

Just like the different paths taken to Brazil, each player with college ties is set to play a particular role for the USA in the next few weeks, whether from on the field or the bench.

Dempsey is obviously one set to feature prominently, and Esquivel noted that it’s pretty much the same kid who first stepped on the field in Greer, South Carolina, who will don the captain’s armband for the USMNT at the Estádio das Dunas in Natal on Monday against Ghana.

“My wife and I are extremely close with him and his family still, you talk to him he’s still the same guy,” Equivel said. “He’s still that kid from Nacogdoches, Texas who thinks he can rap, who is trying crazy things with the ball, still has that chip on his shoulder.”