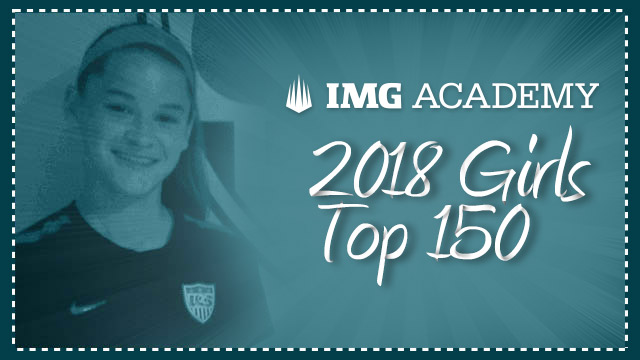 The IMG Academy Top 150 update for girls in the 2018 graduating class is out today, and we already have a new No. 1. Like on the boys’ side, there are a lot of changes in this young age group, most notably at the top, where Michigan Hawks forward Alexa Spaanstra is the new No. 1. Spaanstra impressed at the ECNL National Finals, earning praise as the top player at the event. She then travelled with the U.S. U17 Women’s National Team to Korea with fellow top 10s Rachel Dorwart (No. 2), Jaelin Howell (No. 3), Jordan Taylor (No. 4), and Brooke Bollinger (No. 9).

Spaanstra’s performance was only one of many that made an impression over the course of the summer. Tophat forward Rachel Jones, Legends FC midfielder Emily Knous, Cleveland FC center back Janiece Joyner, Mustang forward Sydney Shepperd, and FC Dallas midfielder Ashley Friedrichs, all showed us enough to improve their ranking in the IMG Academy 150.

Jones is a quick, strong forward who received her first invitation with the U17 WNT on their trip to Korea in August, and raised her ranking from No. 53 to No. 20.  Knous, who makes her debut near the top at No. 38, is a forward who excels at connecting well with teammates. She received top marks at US Youth Soccer Nationals and showed well at Nike ECNL NTC/id2 Portland.  Joyner, debuting at No. 81, is a commanding center back who moves well, and along with Knous, was chosen a Best XI at USYS Nationals. Shepherd, at No. 87, plays defense for her club team Mustang, but was unstoppable at forward during this summer’s TDS NorCal Combine, earning high marks from coaches and our staff in attendance. Also debuting in the top 100 at No. 100 is FC Dallas product Ashley Friedrichs. Friedrichs has received multiple call-ups to the Mexican U15 Women’s National Team and is captain of her FC Dallas ECNL squad.

So that’s it. You can see the newest version of the rankings here. Simply click on the Summer 2014 option on the pull-down menu.