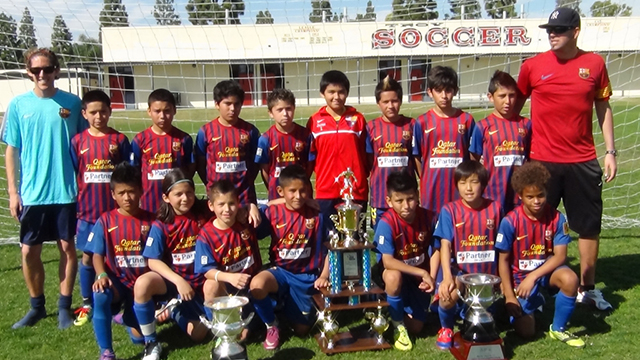 On March 20, Gary Kleiban posted a video on YouTube from the semifinal of the Boys U11 Cal South State Cup.

The video, which can be viewed here, showed Barcelona USA clinically knocking the ball around the field for 12 minutes en route to a 6-0 thrashing over a well-respected club from the area.

Under the guidance of Brian Kleiban and his brother, Gary, who is the assistant coach and runs the popular, highly opinionated 3four3 blog, Barcelona USA’s U11 team has captured the imagination of many U.S. youth soccer fans.

The three-time state champions and coaching staff recently returned from a trip to Barcelona where they were once again engulfed by the culture.

“On a personal level, it has helped me and the coaches,” Brian Kleiban told TopDrawerSoccer.com about the annual trip. “From my perspective, I have been in the academy and watching their academy training sessions - that information is invaluable to me. It has molded the coach that I am today.”

Brian went on to say that the club president, Paul Walker, insisted on the idea that it had to start with the coaches. Now, Brian has seized that opportunity and soaked up all the information he can from these trips.

For the past three years, the players have soaked in the experience too.

“Expose the players to that, and Barcelona to the talent we have in the States,” Brian said. “At first, they were laughing at us. Three years later, the respect level has grown tremendously.”

This year’s U11 team lost in the Round of 16 of the revered MIC youth tournament to another California squad, USA Soccer Stars in a 0-1 result. It was the only goal that the Kleibans’ team conceded in four official games.

“The big picture is to get them to the next level,” Brian said about future plans. “Here in the United States, there probably is not a better program for them. We want to get these kids exposed and hopefully to take the next step to an elite European academy.”

For the immediate, the coaches are continuously trying new ways to challenge the players. Considering the U11 team went through State Cup with only two goals conceded and 43 goals scored in seven games against what is supposed to be the best opposition in the region that is not an easy task.

“We have to reinvent ourselves every day,” Brian said. “We challenge them and motivate them with bigger and better things. For state cup, it wasn’t about state cup. It was about preparing for Europe. When we get to Europe, it is now the hunger to get back and surpass even the best European Academies.”

The Kleiban brothers remain constantly motivated by the prospect of developing a world-class player, but they are contentious of expanding their efforts beyond their resources.

Currently, there are only three teams in the Academy part of Barcelona USA – U9, U10, and U11. Next year, they will add a U9 team to take the total to four teams.

“We are taking our time with it,” Brian said. “Based on the success of the first year of the academy and the video, we have a high level of interest and we just got to take it slow that is how I see it and how the president sees it as well.”

Brian and Gary are not selfish about the information. Gary shares what he can on his website, and Brian hosts clinics for the coaches in his club.

“We are trying to educate as many people as possible,” Brian said.

Coaching education is a point that both Brian and Gary mentioned at length. Both wondered about the lack of direction from many clubs, as they struggle with identity and playing style.

“Why not have our style based on the best in the world,” Gary asked referencing Spain. “My position is the only way to develop players is through the possession style. It is what develops both your technique and your brain.”

Brian continued the thoughts on the lack of identity with the example of Marcelo Bielsa and Athletic Bilbao.

“Bilbao is a club that only has local Basque players,” Brian said. “Under a first year head coach that has always given his team an identity, Bilbao went over and just ran over Manchester United.”

It is the ability to communicate that vision from the coach to the player that sets the best clubs and countries apart from the rest, according to Brian.

“It is all about work and having an identity. Finding yourself as a coach and explaining it to your players. Very few guys that I have come across have that quality. That is why we are still struggling as a country, we don’t have an identity and we don’t know what we are looking.”

The Kleibans have made that move to a set identity with their club, and the results are clearly showing the success.