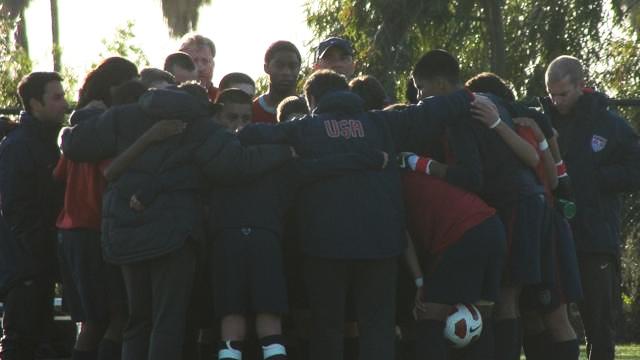 CARSON, CALIFORNIA – In the second game of the doubleheader at the Home Depot Center on Wednesday night, the Cal South ODP ’96 beat the U.S. U14 Boys National Team 3-2 in a rather entertaining affair.

From the opening whistle, Cal South was the more aggressive side and deservedly took the lead after nine minutes. Real So Cal midfielder Alex Ramos tapped in a deflected shot from four yards out for the opening goal.

The U14 BNT continued to battle though, and did settle into the flow of the game after a dozen minutes. Central midfielder Eric Calvillo, who is in his first camp with the national team, took control of the game with his smooth passing and sharp movements on the ball.

The Palmdale, Calfornia native also scored the opening goal for the national team in mesmerizing fashion right before half.

Lagos Kunga
The movement started with right back Weston McKennie. The FC Dallas product beat a few players down the sideline before hitting a cross to the far side. Thomas Golden knocked the ball down for Calvillo, who hit a swerving shot that deceived the keeper and put the sides on level terms right before half.

“Eric [Calvillo] did well,” U14 boys national team head coach Hugo Perez told TopDrawerSoccer.com. “I thought physically we were a little behind the team that ODP brought, but with the soccer, I was very happy.”

Olimpica United’s Marcos Bueno regained the lead for the ODP side in the 60th minute when he beat the offside trap and slotted the ball past Anthony Garduno.

The tallest player on the national team, Haji Wright, provided the response when he beat the high-line from the ODP defense with his superior athleticism and skillfully placed his shot around the keeper.

Wright started the game at striker, but struggled to withstand the physicality of the older defenders and eventually slotted out wide to right wing. Given space and time on the ball, the Galaxy Alliance forward looked dangerous and capable of taking any player off the dribble. Yet, Wright only converted that one chance, as the ODP keeper thwarted his other shots.

West Coast FC’s Zach Kobayashi grabbed the eventual game winner for Cal South ODP in the 77th minute. The U14 BNT needlessly coughed up possession in the middle of the field, and the ODP team quickly sprung into the attack. Kobayashi sprinted past the two center backs and slotted his shot around Garduno for the winner.

“For us, it was great,” ODP head coach Steve Hoffman told TopDrawerSoccer.com. “We fly out to Texas at 8 a.m. for 2012 US Youth Soccer ODP Championships. We probably won’t play a team like that at nationals, but it presents a different challenge.”

This friendly also presented an opportunity for a couple of ODP players eligible for the U14 national team to show their worth to the coaching staff.

“We have a couple of boys who should be looked at,” Hoffman said. “Ethan Lotenero, who just spent a couple of weeks at Liverpool in the winter, missed out on the regional championships in Arizona so they probably haven’t seen him yet.

“Lotheno and Ethan Zubak are both playing with us in Frisco, even though they are both born in 1998 and this is a ’96 event. They both deserve it.”

On the other bench, Perez was pleased with the way his team performed in the last ten minutes in the first half and parts of the second half.

“I wish we could have these could have these kids more often,” Perez said. “With the way they are playing now, we are going to have a very good team for the next cycle at the U17 age group. I am very happy with that.”

Perez went on to say that he will not see these players again for a few months after this camp ends this weekend, which is the most challenging part of the job for the coach. But he also said he is really enjoying this role within the federation.

“These kids want to play futbol,” Perez said with a smile. “I told them today to have fun and don’t worry about the mistakes, we will take care of those later.”

The coach pointed out that his team did not hit a long ball out of the defense in either game, which pleased the technical staff as well. It did contribute to conceding a goal or two, but the overall message that the national team is going to build out of the back was instilled with this group.

or send him an email.
Related: Players To Watch,