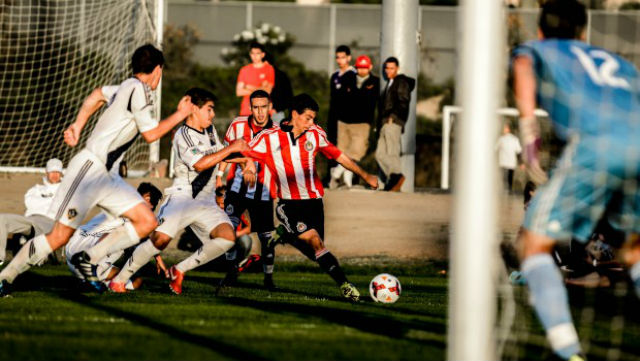 LAFC recently drove the final nail into Chivas USA’s academy as it was known. The nascent club slated to come online in 2017 had an opportunity (how real of one is up for debate) to assume command of Chivas USA’s academy, one of the nation’s best. But Chivas coach Brian Kleiban’s migration to the LA Galaxy and LAFC’s refusal to take on Chivas USA’s dying academy doomed its players to a future that’s only somewhat clear. If LAFC wanted to drive the rest of the city’s top prospects into the waiting arms of the Galaxy, it did a pretty good job.

The Chivas USA academy is nearing its end. The U18 team is currently just outside the playoff picture, which means the U16 side could be the lone team carrying the banner in the academy playoffs. After that’s over, each of these players will scatter for other opportunities. Here’s a look at three who deserve shots elsewhere.

Paradoxically, one of the most difficult skill sets to find is often the simplest in theory: a steady midfield metronome. Having an incendiary threat that can push tempo and score goals is nice, but a consistent presence in the middle of the park is hard to replicate. For the Chivas USA U16s this season, nobody’s been a more unerringly common sight than Leo Cuteno. The midfielder’s started all 33 games in which he’s been eligible this season, and the U16s, despite their impending dispersal, are comfortably in a playoff position with the regular season almost gone.