A hard-working player on both sides of the ball, Taylor Porter’s college search ultimately led her to pick this particular Raleigh-based program. 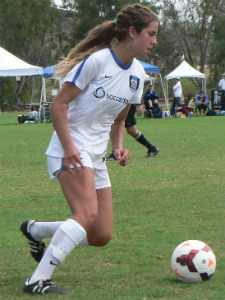 “After visiting a number of schools, NC State had the perfect combination of a great academic school, with the area I wanted to major in, and playing in the very competitive ACC,” Porter told TopDrawerSoccer.com.

While the school isn’t amongst the perennial contenders in the ACC, they are in the midst of building something under relatively new head coach Tim Santoro. Porter was optimistic that things are trending in the right direction, and jumped at the chance to be a part of this.

“Coach Santoro is working hard to build a winning program and I'm excited to be part of the building process to get the Wolfpack in the NCAA tournament again,” Porter said. “From the first time I spoke to Coach Santoro, he was very positive and straightforward and the team and the rest of coaching staff made me feel welcome on my visit."

Along with that optimism, Porter was impressed by what the school had to offer her as a student athlete.

“NC State has a great feeling on campus with having old traditions and new facilities,” she said. “The city of Raleigh itself has great support for the school. NC State also had the area of study I'm looking to major in, animal sciences. The campus is beautiful and had a small feel even though it is a larger campus.”

“Coach Mohammed El-Zare is an outstanding coach and his ability to teach the game will make me a better player,” Snyder told TopDrawerSoccer.com. “He talks a lot about family and really stresses the team aspect of the game.  He made me feel comfortable and really feel good about going there. I am very happy with my decision.”

The 2013 season was the head coach’s first season at Southern Miss., and Snyder is confident that she is joining a program that is on the rise.

“He and his staff are doing a great job of turning the program around at the University of Southern Mississippi,” she said. “USM had their best season since 2008 and I was sitting in the stands when they upset Mississippi State this past year. I know Coach Mo is recruiting some top talented players I have played with and against during club season. I think we are going to do some things there that will make the program very successful in the future. I want to be a part of that effort.”

Defender Blaise Ebanietti (TSF Academy) committed to Franklin & Marshall(w) for the class of 2014.

Defender Sinead O'Callaghan (Scorpions SC) committed to Massachusetts-Lowell for the class of 2014.

Defender Erin Ratchick (Tophat SC) committed to Georgia for the class of 2016.

Midfielder Sophia Cortes (Select Cities) committed to UNLV for the class of 2014.

Forward Lorato Sargeant (McLean Youth Soccer) committed to Virginia for the class of 2015.

Midfielder Mackenzie Dipper (CASL) committed to Elon for the class of 2015.