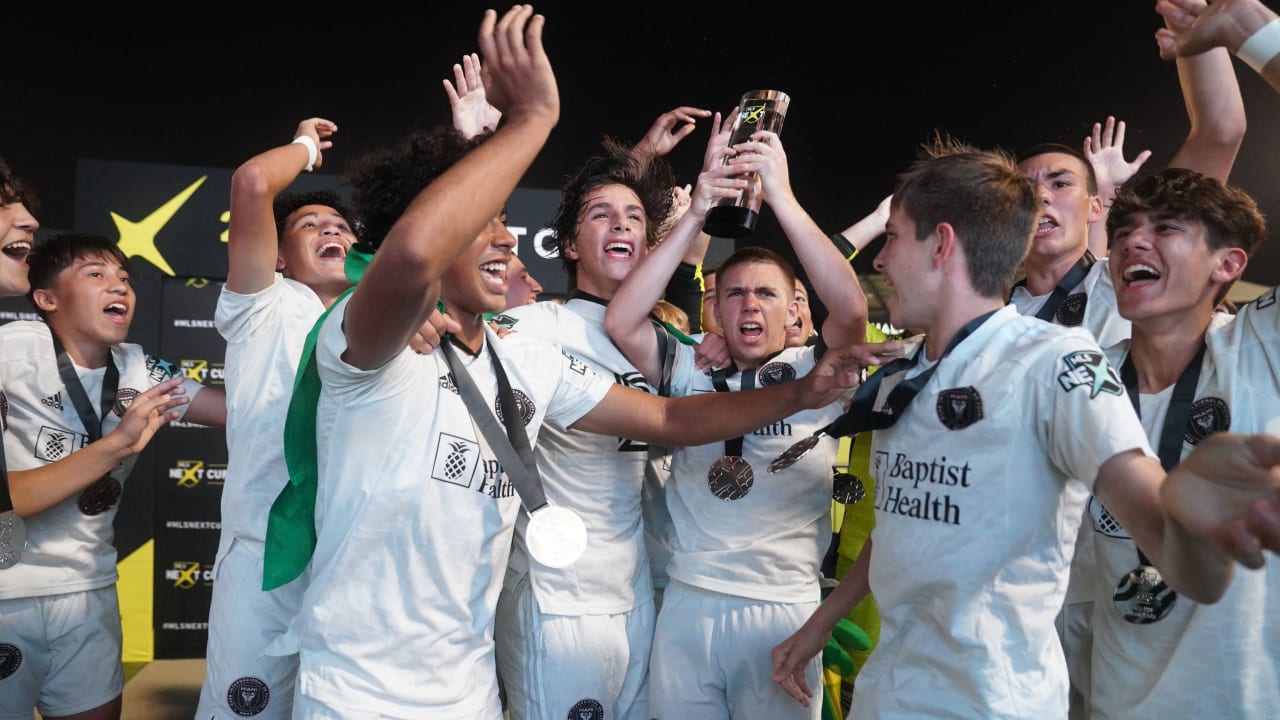 Given the perceived level of talent in South Florida, it’s only a matter of time before Inter Miami starts pushing through quality prospects into the MLS team.

At the end of the academy’s third season of operation – and in the opinion of Academy Director Craig Dalrymple, the first full campaign – there are several markers of success.

One of those was on the field results. The Under-15 team captured MLS NEXT Cup at the beginning of July, besting top teams like LA Galaxy and Real Salt Lake on the way.

From Dalrymple’s perspective, it was a well-deserved accomplishment, and the culmination of a group that faced several obstacles during the 2021-22 season.

“We challenged that group early in the season with playing a lot of older age teams in our community,” Dalrymple told TopDrawerSoccer. “And they got beat up a little bit early in the season, had to deal with that adversity. We had a ton of travel in our schedule, ridiculous amount of traveling in our MLS NEXT schedule in the second half of the season. So we went through a ton of challenge and adversity. And they continued to get results, even through that adversity, which again, led to that belief, and then other passion to come out.”

Match Highlights from an unforgettable night in Texas! 🏆 pic.twitter.com/mm9uOAlYAT

One team, or one age group’s on-field success, is far from the only positive sign. Several players have been summed by their respective national teams. A handful of bright academy prospects have stepped into training sessions or game action with MLS NEXT Pro side Inter Miami II or even into first-team practices.

Dalrymple, who arrived in Miami back in June 2021 as Academy Director, faced the task of continuing a process that was already started – but also having the opportunity to put his stamp on a relatively blank slate. The COVID-19 pandemic had forced youth soccer to readjust on the fly, even shuttering Inter Miami’s debut campaign in the Development Academy.

He looked to implement a sense of uniformity across the various youth squads – Inter Miami will operated academy teams spanning U12 through U19 starting this fall – and ensure that the prospects were hearing a consistent message.

A part of that was giving them a freedom on the field to make decisions and changes on the fly.

“We want to make sure the players become independent with their problem solving, so less joy sticking from the sidelines,” Dalrymple said. “They could problem solve on the fly, we can adjust our structure, be a little bit more adaptable, players to be interchangeable, as opposed to be a little bit more robotic, or stagnant in their position, which is what I experienced when I first came in.”

One of the huge benefits from the team’s location is the depth of the talent pool in South Florida, and beyond. Miami Kendall Rush and Weston FC both generally field competitive teams in MLS NEXT. Outside of South Florida, Tampa Bay United, Orlando City, Florida Rush and Jacksonville FC have solid track records of success.

The diversity of South Florida in particular is a huge benefit, and the soccer culture it fosters. There are families and players that go beyond just the demands the academy places on them. With various backgrounds come different styles of play, and principles of the game. Dalrymple has made sure that along with consistency from the coaches, the prospects are also reminded of the collective.

“They're diverse in terms of what their backgrounds but when they step into our building, and depending on the training shirt or the gameday jersey, they're representing the club and the club has an identity, certainly in the academy space, that they're aware of,” Dalrymple said. “We talk about it on almost every team meeting, it’s in all of our presentations. The players get constant reminders of who they are, how they're expected to act, and who they're representing. So I think that's helped a lot.”

It's been some of those elements that have helped lead to the successful 2021-22 season for Inter Miami. And Dalrymple said while the work remains in place – whether working on coaching development, pushing players up age groups or into the pro setup – he’s eager to sit back and watch some of the processes implement continued to blossom.

At the end of the day, a professional academy’s purpose is to provide players for the first team. That remains one of the last frontiers to check. Noah Allen, Ian Fray, Edison Azcona and Felipe Valencia have all signed Homegrown contracts to the first team, but remain on the fringes of the first team (Fray is also out with a torn ACL).

That’s the next frontier for Inter Miami’s youth setup to cross, and one that Dalrymple feels isn’t too far away.

“All we can do as an academy is get the player to a point where they're ready to step into that environment, then it’s [another] adaptation and [another] challenge for them to sustain and adapt and grow and feel that they can contribute to that level,” he said. “I know it's going to happen, I think we're very, very close to seeing a bunch of players pop through.”