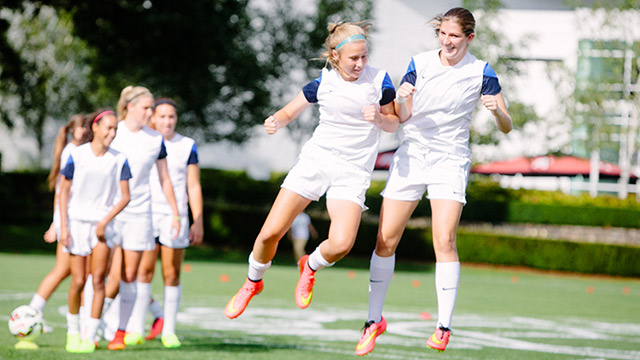 The first game on the final day of the Nike National Training Camp matched Team PSPL (a Washington State team) vs. the id2 squad. This meant that the id2 squad would be facing opposition a year older than them.

The first goal of the game came from Mireya Gray at around the 20 minute mark. The through ball came in and the athletic Gray showed great pace to win the ball. Jackie Schaefer challenged for the ball but Gray showed greater strength and went up against the keeper. With an absolute class finish, gray deftly dinked the ball up and to the side of the rushing goalie and the ball found the side net. 1-0 PSPL.

Half time came and went and 5 mins into the second half id2 equalized . Kelsey Turnbow made a hard run down the left flank, produced some separation and drove in a low cross to get past the keeper. The quality of the cross was such that if Kori Locksley could get a touch on the ball it was a sure goal. The streaking Locksley kicked it into high gear and launched herself to the ball and produced just enough to tap in the equalizer.

Only 5 mins later, Gray, for PSPL, produced another quality goal. Caitlyn Quaempts managed to steal the ball outside the box on the left side of the field. Quaempts then sailed in a beautiful cross and Gray jumped into the air and gave a sort of volley/tap in good enough to give the keeper no chance at a save.

The goal of the match came next. It started with Emma Thomson 10 yards outside the box. She turned and immediately played the ball to Kiara Pickett who did well to get a touch and keep the give and go alive. Thomson, in heavy traffic, then played a first time pass into Turnbow, who timed her run to perfection. On to goal with the keeper to beat, Turnbow was up to the task and slotted the ball into the far post. Game tied 2-2.

Just when it seemed a draw would be the result, in the flash of a moment, Turnbow found herself on to goal once again. Form about 15 yards out Turnbow fired in a shot that stayed low enough to make the keeper dive. Although the goalie managed to get a hand on the ball it proved insufficient and the ball found the back of the net. 3-2 id2. Game over.

At the Nike World Headquarters, on the Ronaldo Fields, the final game of the id2 tournament, kicked off at 12:30.

The match was an exciting one and it turned into a battle between two great players.  The first goal came from Kelly Sweeney. Sweeney had been moved from left wing, in the previous match, to forward, and she looked more comfortable up top. Sweeney was played into space and completely outpaced the center-back contesting for the ball. The goalie came out for the challenge, but Sweeney cranked home a shot to beat the goalie on her near-post side.

The response came from Dorian Bailey only minutes later. Without any significant buildup, Bailey received the ball about 20 yards out, and then launched a low and hard shot that smacked into the left goal post. Chance took its course as the ball bounced off the post and into the goalies back and then bounced into the goal. Tie game.

It was now Sweeney’s turn. The ball was played and Sweeney pounced on it and drove at her defender pushing the ball to her left, creating some separation, and then from around the pk spot cranked in a left footed shot to the far post. Keeper had no chance and Sweeney made it look easy. 2-1.

Bailey was not to be outdone. Within five minutes Bailey was about 20 yards out, had a turn, and sent in a bullet of a ball to find the upper corner for the equalizer.

Despite the run of play between Sweeney and Bailey, it was Samantha Tran who scored the game winner. The central midfielder was running at the defense, and Tran timed her run to perfection allowing the pass to catch her 1 on 1 with the keeper. From there it was easy and the finish was convincing and low and to the far post where the keeper could only watch. 3-2. Game over.