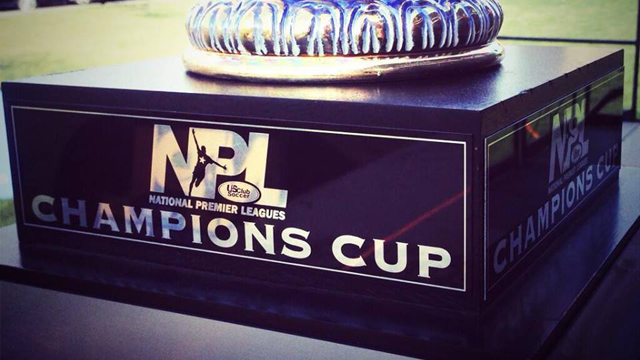 By the end, it sang of either mobbed joy or stunned anguish for the NPL’s best at Aurora Sports Park.

Below are the highlights from a day that saw a game end in penalty kicks, and another finish after a two-goal rally in the final six minutes:

The West Florida Flames thought they had the championship locked up. It wasn’t arrogance, just excitement. They were up 2-1, with only six minutes left in regulation, and they had arguably the best keeper in the tournament on their side in Sean Caulfield.

But CZ Elite had been practicing for this moment for months. And on a play they’d studied the night before, Adam Eaton found separation in front of the box, and tied the game at the 74 minute mark, before Bryan Giron roped a 20-yard laser into the other side of the net four minutes later to stun the Flames 3-2.

It unfolded when Eaton flared up to the top of the box on a corner kick, before a teammate faked a shot, and tapped it to him. Eaton then used a screen of players to block Caulfield’s view before he rolled it past him into the net.

“We’d been practicing for that moment for a long time,” Eaton, who had six goals in the tournament, told TopDrawerSoccer.com. “Coach designed a play and said it would work one day a long time ago. So yeah, we used it and that tied the game.”

Then they won it when Giron rifled a shot from the right of the box into the top left corner of the net for the game-winner.

The Flames were stunned.

“We can’t believe it,” Flames forward Santiago Patino, who assisted Jacob Harris’ goal for the 1-0 lead and then scored the go-ahead goal in the 70 minute, said. “You can’t let a good teams get chances. They proved how good they are.”

Afterward, Eaton said there was no doubt in his mind CZ Elite would win. Hence, CZ Elite’s choreographed celebration at the final whistle.

“We always stayed confident. We’re confident we can always get the win,” Eaton said. “We knew we would pull it out.”

The game and a world’s weight of pressure were all on the shoulders of PDA’s Cameron Harr when he stepped up to the line in penalty kicks during Monday’s championship game.

He said he didn’t feel nervous though. And calmly, he bulleted his first netter of the tournament, and his team’s fifth goal in penalty kicks, to give PDA the 5-3 in penalty kicks over the Chicago Magic PSG after 1-1 draw in regulation and overtime.

“You can’t be nervous when you’re in that spot or you aren’t going to do what you need to do,” Harr said. “I went out and the coach just told me to rip it … So I did.”

Harr’s goal was the only sign of certainty in a game that constantly went back-and-fourth for the nearly two hours. Take a goal, a penalty -- when one team seemingly had all the momentum the other stole it right back.

“It was a great game and it’s tough to say who was better. We both were neck and neck,” UCLA commit David Villegas, who was the only player to score in regulation on PDA throughout the tournament, said. “Neither side would lie down.”

First it was PDA. It opened the scoring when Chaz Burnett finished a James Murphy touch in front of the net to make it 1-0 after 20 minutes. Then it was the Magic. After a trip in the box, Villegas top shelved a penalty kick 10 minutes later to level the score into halftime.

“We knew we couldn’t make a silly mistake or they would beat us,” Harr said. “We knew we had to do it as a team.”

And they did. After a scoreless second half, as well as overtime, PDA keeper Scott Forbes got the only save in the shootout when he made a leaping save on Jesus Perez and Harr ended it seven players later.

PDA outscored its opponents 18-1 through the five days at the NPL Champions Cup.

St. Louis’s players got themselves rattled emotionally all tournament long. Whether it was early deficits they had to climb out of, or late goals by their opponents, they needed to just calm down and take a deep breath.

Luckily for them, they always did. And in the championship game they followed suit and bounced back after giving up a seconds-to-go goal in the first half to get two goals in the second half en route to a 3-1 win over FC Dallas Pre-Academy.

“We’ve had to bounce back all tournament,” St. Louis coach Blake Decker said. “These kids always did though.”

For Scott Gallagher, Clayton Pearson sandwiched goals on both sides of Ben Huels' tally to make up the team’s scoring on Monday.

PDA keeper Hunter Pinho doesn’t shrink on the big stage. Instead, he stretches lengths above his 5-foot-8 stature.

Monday, Pinho gave his team a shutout effort and forward Josh Burnett finished a strike from just inside the box in the 26 minute to help PDA to a 1-0 win over FC Dallas Pre-Academy in the championship game.

After Burnett’s goal, FC Dallas Pre-Academy’s Carlos Avilez, a member of the U.S. U14 Boys National Team, came into net for the second half and turned away five shots to keep the game razor close until the final whistle.

“He was the reason they stayed in the game,” PDA coach Sam Nellins said afterward. “What a terrific performance.”

Meanwhile, Pinho stayed poised in the other net and finished the tournament with back-to-back shutouts.

“Sure, I had some nerves but I was really confident coming in,” Pinho said. “This is the spot I want to be in, and I have to prove I deserve to be here. I think I did that for my team.”

Nobody could stay with the New York Rush in the NPL Champions Cup U16 Field.

The Rush won each of their games by multiple goals and finished off the tournament with a 4-0 win over Boca United in the championship game.

Sofia Griff scored twice while Fallon Sheridan and Meera Dheer each added another.

“We stuck together and I think that helped us a lot here,” Griff said. “We were ready for everything this tournament showed us. We loved it.”

Mia Ramirez tied it before teammate Hannah Ortega scored her second goal of the game to rally Southbay Black Force to a 3-2 win over Massapequa SC in the championship game.

“It was a great game,” Southbay Force Black coach Gustabo Salazar, whose team also beat Massapequa 3-2 on Day 1 of the tournament, said. “We had good control in the second half once we just settled down a little.”

Tualatin Hills United SC held on for its first shutout of the tournament to grab the 2-0 win over defending-champion JFC Elite.

Neither team had a loss in the tournament coming in.

Hometown advantage wasn’t the only thing the Colorado Storm Copa had going for them.

The Storm Copa completed an unblemished tournament with a 5-2 win over St. Louis Scott Gallagher Elite in the championship game.

“These girls know how to find ways to win,” Storm Copa coach Danny Bills said. “We have a lot of talented players that know how to play the right way.”