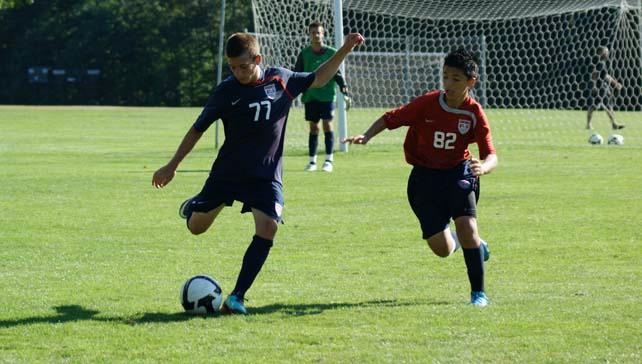 (Scroll down for Friday match lineups)

CONCORD, MASSACHUSETTS – After a final day of matches here at the U14 National ID Camp conducted by U.S. Soccer, 119 players went home to their families and coaches also looked forward to a break even as they continued deliberation over the cycle’s first selection of a 36-man U14 Boys National Team roster, which will be called together for Thanksgiving weekend in Florida.

Head Coach Manny Schellscheidt  said he was optimistic about this age group, in comparison to some other cycles that have gone through the system of late. 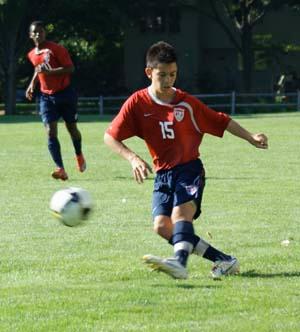 Pablo Pelaez plays in Pool Match Friday.
“You may remember last year we weren’t quite so sure, but I think we’ve seen enough by now that we believe we’ll end up with a pretty good group. The standard of play was pretty solid. They could keep it going. It wasn’t just a little spell where they could say ‘We played pretty well’ and then it was back down to the average stuff,” he said. “Once we got to the point where we put more of the better players on their own field, things dramatically improved in terms of quality of play, individual players that showed us their stuff. We also are usually wondering how we will get goals and there are some guys here who can get goals. So I see good things in every department. Everything is still in developmental stages, but I feel good about this group.”

“We can never stop looking at any place. Any aspect of the game needs to be on the radar for us. The more eyes we have, the more means we have to find better players, the better this program will become. It’s never going to be perfect, but I believe we can increase the awareness level, increase the scouting. Every little bit counts. You need to rely on good soccer people, who have an eye for talent, do well in their neighborhood and can tell us “Look, I’ve got a guy here who belongs on that level.’ Then we need to be ready for that kid to have a chance for him in camp, so he’s being seen. We need to open up the numbers as best as we can under the financial restrictions. I’m happy to say we’ve moved from four camps to five camps, for the 2nd time this year. The more time we spend with the better players, you can see the improvement. The last group (96s) we felt maybe wasn’t quite as strong from top to bottom but even they got it going in the last camp. If we hadn’t had that fifth camp I might have had more to worry about there.” 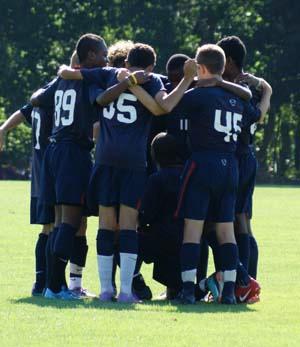 U14 ID Camp players before a game on Friday.
Schellscheidt also championed one of his favorite causes, centers of excellence at a local level to allow more kids the highest opportunities to improve, regardless of financial background.

“I still harp on the same things that I harped on ever since I’ve come to this country. We need to make the local level stronger. The clubs and state associations are where we have far more chance to be efficient. We don’t spend as much time and money on airplanes and hotels and that stuff. Can you imagine if every state would make believe they want to go to the World Cup by themselves. Probably 1/3 of the countries that competed in the last World Cup are no bigger than New Jersey, or even smaller. If New Jersey had one training center, or maybe two with full-time staff, there’s no chance we would miss a kid who has the potential to be a world-class player, and we would know who he is. That would drive the engine,” he said. “There you can do the work and be more efficient from the point of entry, from when kids first come out and start playing, when they’re 6. We have catching up to do because kids don’t work anymore, they don’t play anymore, so in order to compare with other places where they don’t have so many other things to do or so many gadgets to play with, we can take that under consideration, not all because it’s structured, but to get kids to want to be there without a price tag slapped on every chance they have to be good and get better. That’s the kind of competition we need, where we get the good players in the same spot. That would do a world of good.”

Pool Match – Team Five 1, Team Six 1
Amadu Kunateh scored a nice goal in the 1st half for Team Five. Team Six equalized in the 2nd half with a goal from Billy Abdallah.

Team One vs. Team Two