US U14 camp features unusual number of new faces 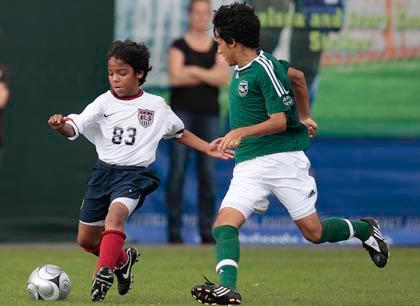 US Soccer youth national team camps can be a little like extended family gatherings. Even though the faces may change from visit to visit, they usually stem from the same pool of players.

The familiarity isn’t lost on the players, who thrive off the comfort zone and look forward to meeting with distant friends and peers.

This week’s US U14 Boys National Team camp isn’t quite as homely as it usually is. This time around there are new additions to the family - an inordinate amount of new players thrown into this mix, that’s making for an interesting competitive environment. 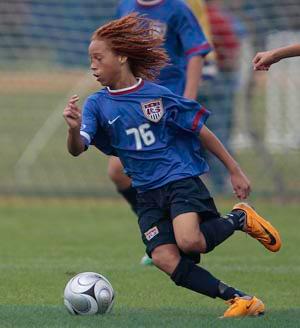 Miguel Polley is a U14 BNT regular.
“The idea of the new guys is that we have tried to keep an open door for more players to come in and others to be put on hold,” said coach Manny Schellscheidt. “This doesn’t mean that past players didn’t perform, it just means we want to give as many people as possible the opportunity to be a part of the program. We also want to keep it low key; you don’t want to advertise a 13-year-old as a US National Team player; that would be too much of a burden to carry around with them.”

There are pros and cons to expanding the revolving door of players who are brought in to camps. Too many new faces can compromise the cohesiveness developed by regulars. But in the name of soccer development, US Soccer is best served to spread its reach as wide as possible, particularly with young groups like the U14s. In general, the older teams have a larger turnover from event to event so it’s best to get the kids prepared for such a process.

“The motto here is performance and improvement,” Schellscheidt said. “It’s all about trying to identify and develop the ones who show they can learn and get better. The goal is to make sure the ones that have an experience here can go back to their clubs and environments and be a good example.”

Schellscheidt identified five players taking part in their first ever camp experience. That may not sound like a lot compared to the 36 players present, but in the tight-knit circle of US Soccer, a handful of first-timers is glaring.

The week’s level of play hasn’t been affected one iota by the changes. It’s been business as usual with daily trainings and frequent intrasquad scrimmages that pit players like Kellyn Acosta, Martin Arrieta, Michael Gray, Nicko Corriveau, Adam Najem, Kennedy O’Shea and Emilio Huerta against one another.

The team has played six scrimmages against outside clubs like Aztec, LA Rampage and a Cal South ODP squad.

“We were kind of lucky to be able to get some great opponents for all the games this week,” Schellscheidt said. “All of the teams we played challenged us, some we beat and others we lost to. It’s great either way. To be in a game when your stuff works is great and when you’re up against a mountain that has to happen too, and you probably learn more in that situation.”

The group will have learned a ton before they head home today after having gone through a week of nonstop soccer.

“After a week I think they’re ready to go home,” Schellscheidt said. “If we dragged it out to more than a week I think it would be an overload. It’s a demanding program, and when it’s over they spend a lot of time in bed and then all the lessons are probably learned later.”