Anyone watching Walker Zimmerman play for the first time this fall in U.S. Youth Soccer’s Region III Premier League or ODP Interregional, would have seen a big (6-1, 175) and athletic 15-year old with good feet and vision, plus someone with strong leadership instincts and the respect of his teammates.

Nothing not to like there, but Zimmerman’s strong presence and displayed potential belied the fact that he had gone through a roughly 12-month journey of pain, inactivity and doubt.

Zimmerman, a defender and midfielder from GSA Phoenix U16 Boys in the greater Atlanta area, had been a mainstay of the U14 and U15 Boys National Teams during his respective cycles with them. At the spring 2007 meeting of the U15 BNT however, Zimmerman developed such a pain in his feet that he could scarcely run, and he missed most of the camp. 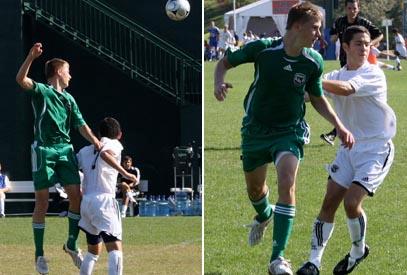 Walker Zimmerman (green) has returned from a long recovery.
The diagnosis was Sever’s Disease, a condition where a child hits such a growth spurt that muscles and tendons in the heels cannot withstand the rapidly-expanding bone. Zimmerman had grown nearly four inches in less than two months and so was a rather extreme case of the syndrome.

Forced to sit out nearly three months from that point, Zimmerman continued to deal with physical issues related to his rapid growth, including hip flexor problems. Upon regaining some level of vigor and form last spring, Zimmerman was invited by Wilmer Cabrera for a U17 MNT training camp in St. Louis where he promptly suffered fractures three metatarsal bones in his foot, leaving him out for the rest of the camp, his GSA Phoenix’s appearance at the Region III Championships, and the subsequent Region III ODP camp.

So when fall came around, it was no small feat for Zimmerman to come back and make such an impact.

“The season before was the first time I’d sat on the bench or whatever, and then this season was after what happened at St. Louis, so I had some real doubts,” Zimmerman said. “I remember (GSA coach Nuno Piteira) saying ‘It’s a miracle what you’re doing’ that some player never come back from those injures and that I had come back almost like I’d never had the injury. When we had the ODP event (just after Christmas) I knew I had to play well and that it was a big event. But surprisingly, I wasn’t too nervous about it. I think as far as leadership goes, that was a big deal to come back and be effective like that.

Zimmerman played right back for South Carolina coach Mark Berson’s Region III 93s, even scoring a goal off a set piece as part of his strong performance. Some of his teammates at the event include Jon Ray, Kevin Pahl, Matt Pacifici, Jack Falle, Jack Coleman and Dominic Bonilla.

Piteira, while admitting the perception of bias, believes Zimmerman has returned to his previous youth national team form.

“I know I’m his club coach but I also know the pool fairly well,” he said. “I know where he’s at and the kind of leader he is. It’s not too often someone can just step on the field and make the kind of impact, not just technically, but in terms of the way he impacts players around him. On a personal level I believe he’s at national team form. He’s back playing at that level. He’s gone through a lot in terms of injuries but his physical development is at a point where he’s really put together. He’s been playing against a high level of competition and really doing well.”

Zimmerman said there was a point where he wasn’t sure he’d ever play his way back into contention for national team duty.

“I was thinking to myself (after St. Louis), ‘This is the chance I have that I can’t pass up, why is this happening with me? If I’m supposed to play soccer, why do I have these struggles through huge events?’ That summer was the first free summer I really have had, and I had time to spend with my friends and I made a closer relationship with God during that time,” Zimmerman said. “One verse I thought about a lot is Philippians 4:11 (“I have learned to be content in whatever circumstances I am.”). The injury turned out to be a blessing in disguise.”

Zimmerman said the time he spent not playing but being around his team helped him understand the concept of being selfless and a servant. He also was able to brush up on his tactics.

“It’s a whole lot different to watch a game from the bench than when you play,” he said. “It gives you an overview, so I definitely learned some things tactically.”

Walker, a 2011 grad who is beginning to get quite a bit of attention already from colleges, said he received a lot of support from his parents David and Becky, plus older brothers Carter and Dawson (a football punter at Clemson).

He’s looking forward to traveling with the Region III team to Argentina next month, plus whatever might come after that. But as his mother Becky reminds, the family has learned not to take anything for granted.

“It gives you hope to see him do so well, but I think we’ll always be guarded that something else might happen,” she said.

Even that, she notes, would be for a reason.

“I’ll just tell you right out, it’s been tough for me to look through a window and watch him do deep-water running by himself in a pool somewhere with no audience, no applause, no coach, but just him doing it himself and trying to find a way back to play well again,” she said. “I’ve seen him doing so many things that were no fun because he wants to get to the other side and persevere. I can only think to myself there’s something big on the other side.”

Becky Zimmerman added that Walker’s ordeal should serve to make him a better teammate.

“I don’t think you can care about the healing of others as much,” she said. “Whether it’s, emotional or physical or spiritual, you can’t care enough unless you’ve been through your own.”
Related: Players To Watch,