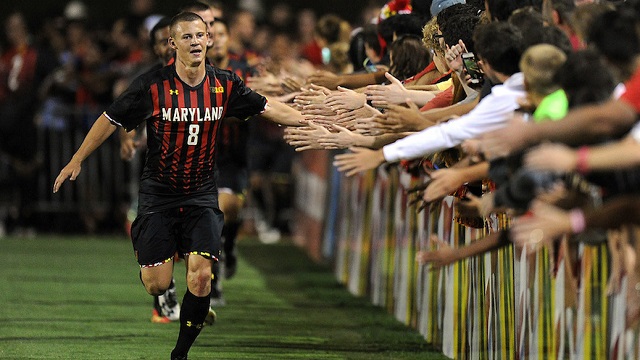 By the end of the season, the Big 10 title hunt was really only a one-horse race. Maryland was unquestionably the nation’s best team for almost the entirety of last season, which is why that single ‘1’ in the loss column was so galling. After 18 wins in 20 games, including zero losses, Maryland blew a 4-1 second-half lead to Providence in its first NCAA tourney game. Just like that, poof, it was all gone.

Through that prism, motivation should come relatively easy to the Terps this year. And thanks probably in part to that loss, they welcome back the most important pieces of the nucleus from that 18-win team from a season ago. Gordon Wild is probably the Hermann Trophy frontrunner. Real Salt Lake Homegrown Amar Sejdic is one of college soccer’s best No. 10s, if not the best. UCLA transfer Chase Gasper, who has College Cup experience, will help hold down the back line. U20 World Cup vet Eryk Williamson will anchor the midfield. This might be Maryland’s last year with the national title window propped wide open with this particular group. Needless to say, the Terps should be expected to ride roughshod over the Big 10 again this season.

The conference itself was starkly divided last season between the haves and have-nots. The top four of Maryland, Indiana, Wisconsin and Michigan State broke away from the pack to form the basis of the league’s tourney title challengers. Penn State formed the .500 midsection while the bottom half were all well below .500 for the season.

It doesn’t seem like the order at the top is in for much of a shakeup behind Maryland. Indiana is clawing its way back toward College Cup relevance, and they’re as close as they’ve been in five years. A top three freshman class should help bolster a returning group featuring arguably the nation’s best defender in senior Grant Lillard and a midfield anchor in Jeremiah Gutjahr who had vital U20 World Cup qualifying experience. Indiana’s defense won’t be the problem. If the Hoosiers can find a more consistent source of goals, perhaps from one of the freshmen, they’re a lock for a deep NCAA run.

Michigan State and Wisconsin are in line to challenge them. The Badgers no doubt felt hard done by in not making the NCAA tourney despite an 11-win season and a respectable if unimpressive No. 40 RPI. Seemingly carrying over a tradition from the annually competitive basketball team, Wisconsin was individually unimpressive in 2016 but collectively terrifying. That sort of scheme rarely takes years off, and the return of key contributors like midfielder Mike Catalano and senior backstop Philipp Schilling means Wisconsin will almost assuredly finish in the top four again.

Michigan State is right there. The Spartans started strong in 2016 but fell apart a bit toward the end of the season, losing two of their last four and going down to SIUE in penalties in the NCAA tourney. The good news is that the nucleus is back from last year, and on paper this team looks stronger than any team in the conference aside from Maryland and Indiana. Whether the Ken Krolicki and Giuseppe Barone-driven midfield can help the Spartans rise even higher than that after losing to both those teams last year is not entirely clear.

Which of the bottom five from last year can rise off the proverbial mat and give the perceived top four a run for its money is as clear as mud to start the season.

At least on paper Michigan seems to be the best bet. The Wolverines endured a brutal 2016, taking a lot of lumps and going the first nine games of the season without a win. A season-ending 3-2 loss to Maryland in which the Wolverines showed no shortage of grit was a nice enough way to end the season, but Michigan needs more out of its 2017. That probably put coach Chaka Daley on the hot seat to start the year, and luckily for him this might be his best team. Junior forward Francis Atuahene might be the most exciting player in the country, and Marcello Borges is a pro-level fullback.

Penn State will likely spend much of the 2017 season trying to figure how to replace Connor Maloney. The attacking dynamo was the program’s lynchpin for several years, and losing him to MLS was a significant blow. The Nittany Lions will have to shift around responsibilities to quality returners like Aaron Molloy and Pierre Reedy, but no team in the conference lost a more integral piece than Maloney. Their success this season will hinge on how they fill the void.

Ohio State, Northwestern and Rutgers were picked by the league’s coaches to finish in the bottom three this season with less returning than their peers. After winning 22 games over the previous two years combined and hitting the Sweet 16 in 2015, Ohio State crashed back to earth in 2016 with a five-win campaign. And to look at the Buckeyes’ roster now, there’s little question they’re in a rebuilding phase. Ohio State carries a whopping 16-player freshman class into the season, 15 of whom are true freshmen. How good Ohio State is in 2017 largely depends on how fast its enormous group of underclassmen grows up.

Northwestern got off to a great start in 2016 with a win over NCAA tourney team Florida Gulf Coast, but the rest – just five wins in the next 16 – was largely forgettable. The Wildcats have some nice pieces back, led by strapping forward Elochukwu Ozumba, who’s still largely trading on promise after scoring a disappointing six goals in his first three years. If Ozumba finally breaks out his senior year, Northwestern could nick a few surprise wins with its already stout defense.

Rutgers almost has to be better this season by default. The question is merely how many more wins they can collect than the one they picked up last year. The Scarlet Knights barely avoided the ignominy of a winless 2016 with a 3-2 win over Bradley, which itself only won two games last year, on the final day of the regular season. The season was a stunning reversal from a 12-win 2015 that included an NCAA tourney win. Rutgers has a mixed bag of a nonconference slate with some brutal matchups (North Carolina, Wake Forest) and some winnable ones (Oral Roberts, UMKC). There’s enough talent here to vastly improve on 2016, even if the NCAA tourney seems like a far-off goal as of yet.