Head coach Bob Butehorn has done a tremendous job building Florida Gulf Coast(m) in the six seasons at the helm, and he’s eyeing a third straight NCAA tournament bid this year with the Eagles. Like many college teams, FCGU is dealing with a high rate of turnover between seniors leaving, along with starting center back pair Daniel Stanese who left after his first year in Ft. Myers, though his partner Aaron Guillen returns to the fold. Getting more goals out of Felipe DeSousa, the Freshman of the Year in 2012, would certainly help the squad continue its string of recent success. 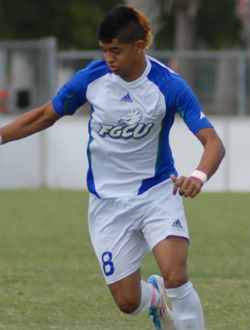 Meanwhile, East Tennessee(m) boasts a number of All-Atlantic First Teamers returning. They include goalkeeper Ryan Coulter, Maximilian Muemken, midfielder Itode Furara and forward David Geno. The senior quartet is no doubt out to make one final lasting impression, while Geno (13 goals, 7 assists) looks to duplicate goal scoring success of 2012 that saw him earn Player of the Year honors. This marks ETSU’s final season in the Atlantic Sun, as they are returning to the Southern Conference next year.

It’s far from a two horse raise in the conference, however, as Mercer nearly managed to win the conference tournament, falling in overtime to Florida Gulf Coast(m). Senior forward Ehjayson Henry topped the team in goals last year, and he’ll look to team up with last year’s top assist man Ryan King also in his final season at Mercer. Goalkeeper Greg Ranjitsingh enters his third year as a starter between the pipes and will look to make his case as one of the best GKs in the nation.

Jacksonville, Lipscomb and USC Upstate all made the conference tournament last year (six teams qualify) and each program will look to make a deeper run this time around.

It was something of a two-horse race last season in the Horizon League, with Detroit(m) and Cleveland State finishing 2012 in first and second place respectively. Will it be a repeat of that this season? Of course, at this stage without a ball being kicked, it’s all up for grabs with the eight teams in the conference, as Loyola-Chicago departed, replaced by Oakland, which joins from the Summit League.

Detroit(m) has a lot of big pieces coming back into the fold for this year, including Player of the Year Adam Bedell. The 6-foot-6 midfielder scored 11 goals and notched five assists in 2012, and will look to cap off an illustrious career with one more impressive campaign. Also joining him from the All-Conference Team is Matt Ybarra, who contributing in a mix of a starting role and from off the bench. Improving at the back is key for this season, as the team scored 26 goals but also conceded 27 last season.

The loss of goalkeeper Brad Stuver is a big piece for Cleveland State to figure out how to replace. But beyond that, there is a lot of experience returning for the Vikings. Forward Admir Suljevic, midfielders Aslinn Rodas and defender Zach Ellis-Hayden are all heading into their senior seasons coming off of campaigns that saw them land on the All-Conference team, and certainly provide the ingredients for a return to the NCAA Tournament for Cleveland State.

Looking to vault ahead of those two squads is UIC. While influential midfielder Ivan Stanisavljevic graduated, there is plenty of talent returning, including midfielders Jesus Torres and Slobodan Aleksov, the latter coming on very strong after jumping into the starting lineup in October. Head coach Sean Phillips will have to find the right combinations, and quickly, as the program aims for a first NCAA Tournament appearance since 2008.

Last year’s Summit League regular season champion, Oakland now has a new home for 2013 in the Horizon League. There’s little doubt they’ll want to carve out some success right off the bat, though they’ll have to do it without the production of Kyle Bethel (7 goals, 13 assists in 2012) and the defensive work of John Timm, both players graduating along with Johnny Dreshaj. Despite those losses, quality options remain, like midfielder Miche'Le Lipari and forward Joey Tinnion who are both both going to jumpstart things in the final third.

Not to be outdone, Horizon holdovers like Wisconsin-Milwaukee, Wright State, Valparaiso and Wisconsin-Green Bay will look to jump into the mix as well after finishing mid-table or lower in 2012.