There is one big reason to watch the Big South in 2012: Ashton Bennett.

The senior forward scored 23 goals and contributed seven assists in 22 games for Coastal Carolina last season. That was tops in the NCAA for total goals, points, and points per game.

The scoring outburst propelled the Big South League Champions to the highest offensive output in the NCAA, which equated to three goals per game.

While those lofty numbers may seem unobtainable, there is reason to believe Coastal Carolina could be just as good in 2012. Bennett is not slowing down, and he proved in the NCAA tournament against UNC that he could top even the best defenders in the nation.

The rest of the Big South better find some solution (I’d suggest working on the offside trap and holding onto possession for long stretches) to slow down Bennett and company or it will be another long year for goalkeepers picking up the ball out of the net and yelling nonsense at defenders. 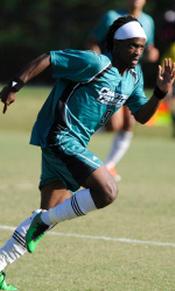 Beyond Bennett, sophomore defender Kjartan Sigurdsson is another player to watch for the Chanticleers. The Icelandic defender had a strong showing in his freshman campaign.

On the macro level, Coastal Carolina’s schedule should be of some concern in terms of RPI. With no games against ACC teams on the docket, the Chanticleers probably won’t be able to afford losing the conference tournament again.

Although, the preseason ranking in the NSCAA (the coaches’) poll, #17, should lead some credence to how strong this team is without proving itself against a high profile opponent.

The Runnin’ Bulldogs fans are going to find out what this team is made of really early in the season. Gardner-Webb opens the year with a road clash against defending national champion North Carolina.

Then, the Bulldogs return home for a fixture against Furman. With eight seniors on the roster, this is an experienced group that should know how to handle those tough opening games, but those two matches will be awfully difficult from the start.

The top three scorers from last year’s group, Chris Davis, Denzel Clarke, and John Sargent, are back, which should be a massive help in Gardner-Webb’s bid to knock off the heavily favored Chanticleers in the Big South.

The Campbell Camels return nine starters from the team that finished third in the Big South in 2011. Headlining the list of returners is midfielder Mitchell Cardenas (six goals, six assists) who earned First-Team honors in the conference.

The Camels shortcomings in 2011 came in both consistency and defense. Campbell let in 34 goals in 20 games, but the majority of those goals came in only a few games including the 1-5 defeat to Coastal Carolina at the end of the year.

With another year under their belts, the expectation is Campbell’s defense will improve in 2012 and allow this group to be competitive at the top of the conference in November.

Liberty Flames showed its worth in the conference tournament, where Jeff Adler’s group knocked off Radford, Coastal Carolina, and Gardner-Webb to clinch the berth to the NCAA tournament.

Then, the Flames showed well on the national stage with an engaging encounter with Old Dominion that ended in a defeat in penalty kicks.

This year’s squad will need to replace some of the magic from the previous season, as five players moved onto professional contracts from that 2011 team. Overall, Adler has 14 returners on a 27-man roster, which means there will be a lot of new faces for the Flames to start the year.

Luis Grande did not suffer through a sophomore slump in 2011. The Venezuelan midfielder scored eight goals and added three assists in his second collegiate season.

This fall, he is expected to continue his dominance for the Highlanders, as coach Marc Reeves will be leaning on Grande to come up big with 2011’s leading scorer Iyiola Awosika moving on after four years with Radford.

The record may not reflect it, but there is a lot of talent (and for that matter interesting prospects) on High Point.

Four returners were part of the Carolina Dynamo squad that advanced to the USL Premier Development League National Championship this summer. A number of incoming recruits made appearances at the USSF Development Academy Finals Week in July.

If head coach Dustin Fonder can get this group on the same page and find a system that fits his best players, High Point could be the sleeper pick for the Big South. Watch for Mamadee Nyepon to double his output from his freshman season (five goals, two assists), as he assumes a larger role with the squad.

Winthrop lost nine lettermen from last year’s squad, but added 13 players to this year’s squad with new recruits. It is difficult to say how good those new pieces will be given half of them are international players.

The Eagles coaching staff appears high on Tobi Abel (Nigeria) and Achille Obogou (Spain) among the new names. Obogou is a 6’5 target forward who should help out with an offensive that only produced 19 goals in 2011.

The Bulldogs of UNC Asheville are searching for answers in 2012. The team lost the two leading scorers and the starting goalkeeper from last year’s group. Also, there are only two seniors on the roster for this fall.

The main question should be who will step up to replace the five starters that were lost from last year’s team.

Head coach Matt Kern, who is in his third year in charge of the program, is excited about the incoming class specifically Trey Hemphill who showed well during the North Carolina high school all-star game last month.

The big news this offseason for Presbyterian is the renovations to the stadium, which look to be coming along swimmingly this summer.

On the field, head coach Bret Boulware is looking to replace four starters that left from last year’s group. However, Boulware does return the top three scorers from that group in Byron Quinatoa, Jonny Mercado, and Ignacio Monchetti.

Without beating around the bush, it has been a while since the Keydets were good. Six wins in 2007 is the most victories for this program in the last five years.

Head coach Richie Rose is in his fifth year in charge this fall and will be looking at a roster full of his recruits, as he hopes to right the ship in Virginia.

Longwood’s schedule is strange. The new addition to the league starts the season with conference games and then has a four game stretch in the middle of the year with non-conference clashes.

Due to the Atlantic Soccer Conference dissolving, Longwood was forced into these situations while joining a new conference. The Lancers open up the year against the favorites Coastal Carolina.

The Atlantic Sun is one of those conferences that not many look at unless they have a vested interest, but the A-Sun normally delivers some of the most thrilling games of the season.

There are very few teams in the nation as enjoyable to watch from a neutral perspective as FGCU. The Eagles play an attractive blend of possession dominant soccer.

Head coach Bob Butehorn was the first man in charge of the program when it began in 2007. Five years later, the Eagles look like a perennial favorite in the conference and continue to improve with each recruiting class.

This fall will not be easy though. Last year’s senior class was nine players deep and replacing that amount of talent will be tough. Incoming freshmen Daniel Stanese and Aaron Guillen should contribute immediately.

Also of concern, the Eagles open the year with road games against Akron and Georgetown. It might be a tough start to the year for FGCU, but don’t count Butehorn’s group out of it.

Jonathan Mendoza is an MLS-level talent. He has the skill and vision to play at the next level. The midfielder has been a terror in the Atlantic Sun for the past three years and that likely will only continue this fall.

There is talent around him on the Hatters, but Mendoza is one of those hidden gems of college soccer and worth all of the preseason hype.

Beyond a down year in 2009, Jacksonville has emerged as a plus .500 team and challenger in the Atlantic Sun over the last five years.

Head coach Mike Johnson faces an interesting test this year though with no seniors on the roster. Junior Nick Rodriguez will be the key for the Dolphins attack in 2012 after scoring three goals and adding six assists last fall.

Ehjayson Henry, a transfer from Penn State in 2011, notched five goals in his first season in the Atlantic Sun. In the offseason, Henry received the call from his national team St. Kitts-Nevis.

The Bears will be counting on Henry to bring that international experience back to Mercer this fall.

ETSU should have been much better in 2011. There were a number of disappointing results over the conference portion of the season that covered up some of the very good performances.

That said, ETSU came within inches of making it to the NCAA tournament, but ultimately lost out to FGCU in the conference tournament.

Replacing forward Aaron Schoenfeld will be difficult, but head coach Scott Calabrese has a very good leader in goalkeeper Ryan Coulter who should take charge of the Bucs in 2012.

Head coach Charles Morrow brought in 15 new players for the 2012 season. Morrow said that there were very few positions “locked down” in the release about the recruits.

Depending on new faces to the college game can be tricky, but the Bison could use a breath of fresh air to the program to stay competitive with FGCU and others.

Defender John Kadane has been a rock for the Spartans during his three years in South Carolina. The Texan has started nearly every game.

Head coach Derek Marinatos brought in nine new faces for the 2012 season. The second year head coach relied heavily on local talent to fill the ranks as he attempts to rebuild a program.

Welcome to Division I, Northern Kentucky. The Norse enters its first season in Division I and the Atlantic Sun this fall.

Head coach John Basalyga has a predominantly young roster with only two seniors. This first year will likely consist of a few bumps and bruises, but NKU does have the Division II experience to help guide the way into this inaugural season.