Brian Pensky has big shoes to fill at FSU 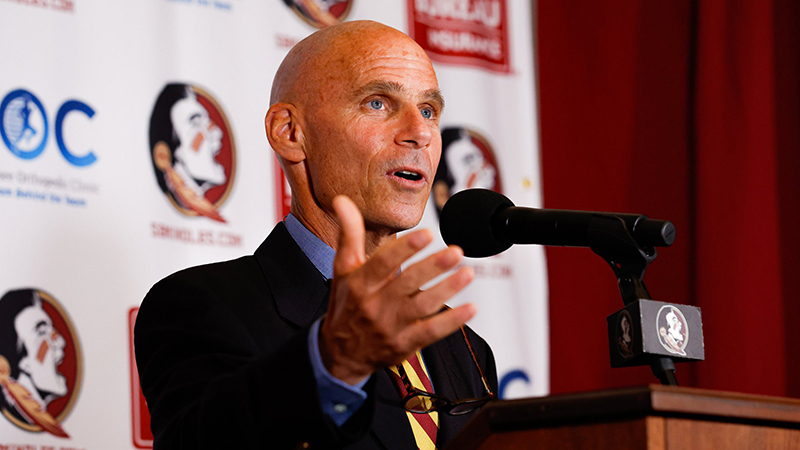 He’d spent a few weeks dipping in and out of conversations about who might be a good fit for the job after coach Mark Krikorian suddenly resigned. He’d suggested some coaches, kept tabs on who could be interested.

But he never thought his own name might be in the mix — at least, not until the phone started to ring.

“I knew that this was going one way or the other. [Alford] has got a new coach and he's happy about the direction that he's moving in. Or he's calling me to have a serious conversation,” Pensky said. “I was hoping that it was the latter. I really didn't want him to have a coach.”

Alford didn’t. So, after a few days of conversations, Pensky accepted the role, leaving behind a program that he had helped build — one he had just carried to an SEC tournament title.

That accolade added another feather to his esteemed cap, contributing to a resume that can battle the high expectations set by his predecessor’s success. But there’s a bigger challenge than that: inheriting a squad still recovering from a major coaching change, and figuring out how to get them back to the zenith of the sport.

“They suffered a great loss. It wasn't death. But it was a very sudden loss,” Pensky said. “So that was pretty devastating to these kids.”

Pensky inherited what he dubbed “the best job in college soccer”. The defending national champion Seminoles have been a powerhouse in the ACC under Krikorian, winning three of the last seven college cups, and bringing home 12 conference titles. Add to that the glorious Florida weather, the appeal of its picturesque campus and the school’s academic pedigree (it’s now a top 20 academic school in the nation) — and the job was too good to pass up.

Still, Pensky had his doubts at first. He’d just taken the Volunteers to the SEC tournament crown, and a surprise exit to Michigan in the NCAA Tournament prevented his Tennessee squad from meeting Florida State in Tallahassee. Most of that team was returning for another shot at the big time. His son was due to graduate from a Knoxville-area high school in just weeks. Tennessee, for many reasons, had a real gravity for the veteran coach.

Still, Florida State is Florida State, so Pensky kept his options open. And when the call did come, negotiations to drag him seven hours southeast to Tallahassee were completed swiftly.

His introductory press conference was a determined one. Pensky, relaxed, had only five notes on his paper to set up a lengthy preamble: five stats about Florida State’s championship-winning team.

“I just got up there, and I spoke from the heart and the gut,” Pensky said. “And that's me.”

He’s hoping the team sees that, too. As soon as he took the job, Pensky reached out to the squad. Well aware of the fallout from the resignation of a head coach of 17 years, Pensky realized there was some trust to build.

“It's like Dad dies and Mom marries a new guy. And it's like, ‘I don't want to meet the new guy,” Pensky joked.

It wasn’t an ideal time to meet; he was announced as head coach on the first day of finals. However, Pensky found time that Monday evening to introduce himself, discuss his philosophy as a coach, and articulate a vision for the program.

And there would have been some familiar elements in that vision. There are a few similarities between Pensky’s Volunteers and Krikorian’s Seminoles. Both teams enjoyed the majority of possession and press when they don’t have the ball. Both created over 15 chances per game last season. And both broke the 60-goal mark in fall 2021.

There are some tactical differences. Pensky is flexible, having played around with a diamond shape in midfield while also flirting with some version of a 4-3-3 and even 3-5-2. Krikorian, meanwhile, tended to adhere to an unusually fluid 4-4-2.

Still, some of the basic principles — possession, pressing, speed — should be there.

We had a chance to formally introduce coach Pensky this afternoon! #OneTribe pic.twitter.com/yZdkk0OsYa

“We’re gonna want to keep the ball, just as they have in the past, and make teams chase us,” Pensky said.

However, that system can’t be cultivated without an understanding of personnel. So, right after he stepped on campus, individual meetings started. Pensky made a point to chat with every player in as much depth as possible. He spent two full days in the team conference room, having countless conversations to find out what makes his individuals tick. For those who had already left for summer break, he made arrangements via Zoom. By the end of the week, Pensky had gone through the whole roster.

And those conversations have continued, as Pensky slowly gets to know his players.

“I'm texting with players every day. I'm on the phone with players. I've done a couple of zooms with some of the older players,” he said.

Then, his team dispersed. With preseason over, most of the Seminoles squad has headed home to train with top level club teams, or even professional organizations, staying sharp ahead of a fall season where they hope to successfully defend a national championship.

Pensky, meanwhile, is left with film. He’s spent hours scouring tapes of Krikorian’s Florida State, trying to figure out how to best deploy his squad — watching how he can adapt a team that was built by someone else.

He’ll notice a particular pass here, a specific run there. He’ll ponder how Krikorian made use of the Seminoles’ elite wide midfielders, and if the squad will fit into his preferred 4-4-2 diamond shape.

And then, on August 1, he will walk into the office on the first day of preseason. He’ll see the framed jerseys of former players lining the hallways. He’ll see the badges of Orlando Pride, AC Milan, Manchester City, and Lyon. He’ll see the championship trophies, the conference titles, the plaques for All-Americans.

And then he’ll try to figure out how his players — how his team — can fill some space on those walls.