Rock Hill, SC – The College of Charleston, Kentucky, East Tennessee State and Furman each won 1 game and lost 1 game.  This article will be about these 4 teams at the Manchester Cup. I covered two winning teams yesterday.

Disclaimer:  In the spring, players change numbers, new transfers and incoming freshman start playing.  Rosters are not updated/nor provided.  I assume that I’m going to mis-identify some player because of this limitation.  Send me an email at mauceri@topdrawersoccer.com with the correct identification, if you uncover an error or omission. 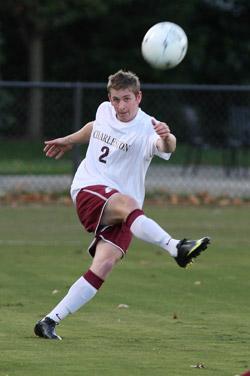 The College of Charleston throttled Winthrop 3-0.  It was essentially the same starting line-up and a subtle change in formation that could be more of positioning at the time observed and the opponent’s lack of attack.

The lone goal against UNC Wilmington was scored by Sean de Silva in the 31st minute.

Against Winthrop the goal scoring started early, Joey De Mare scored in the 7th minute.  Ralphie Lundy hit a long free kick that De Mare one-touched from the top of the box and his shot looped into the goal just under the cross-bar.

The second goal was scored by de Silva in the 15th minute from a 30 yard laser.  The ball was well struck and skipped across the wet surface – it was initially stopped by the goal keeper but the ball got under him and it squirted into the goal.

In the 65th minute, Lundy buried a left-footed 25 yard free kick into the upper 90.

Shawn Ferguson is good in the air, but he is still so thin.  When is he going to fill out his frame?  I do like his tackling – but I worry about his ability to battle in physical contests at the next level.

Branko Gavric returns from injury that he suffered last year – but he wasn’t moving well. He wasn’t feeling the game – too much thinking about what to do.  I expect that by fall, he’ll be playing more instinctively.

Goal keeper Kees Heemskerk is a tremendous goal keeper.  He’s a good shot blocker, good in the air and controls his box.  Against UNC-Wilmington, he made countless saves that kept his team in the game, early.

Sean de Silva has very good ball skills.  He reminds me of former College of Charleston Zach Prince (who is now playing for the Charleston Battery).  Both have outstanding technical skills, but have defensive deficiencies. Late in the 2nd half, Heemskerk booted a long punt that had de Silva behind the defense, but he didn’t track the ball properly and the goal keeper was able to reach it first. A more direct approach would have put de Silva on goal with the ball.

Lundy is an above-average passer on accuracy and weight. He’s one of the best in the college game on set pieces.

In the 64th minute against UNC-Wilmington, College of Charleston had a 5 on 4 break; Lundy smartly got the ball wide to de Silva down the left side.  With Eric Fornell open on the far post, de Silva didn’t cross the ball to him and de Silva was dispossessed.

Tyler Vukoder has difficulty with the speed on the defensive side – as a left back – that’s a problem. 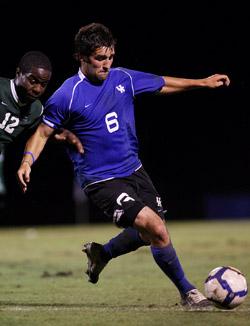 Matt Lodge, Kentucky
Kentucky looked terrific in the first game against Winthrop – the best that I’ve seen them in the spring in many years.  But Kentucky looked ordinary against East Tennessee State University.

In the 14th minute against Winthrop, Brendan Murphy opened the scoring with a powerful 12 yard shot that the Winthrop goal keeper tipped but couldn’t fully re-direct it wide. The play started with Jacob Kemper getting the ball wide to Matt Lodge who took the ball to the end-line before finding Murphy unmarked in the box.

In the 25th minute against Winthrop, Kemper scored from a tap-in.  Cameron Wilder dribbled into the box finding Kemper on the far post for the easy tap-in.

The third goal was scored by Josh Mulvany in the 40th minute.  It started with some quick passes between Kemper to Murphy finding Mulvany behind the defense and Mulvany buried the shot into the upper 90 at the far post.

The sole goal against East Tennessee State University was scored in the 69th minute by Lodge who gathered the ball at the top of the box and bent the ball around a defender to find the far post side netting – beautiful shot.

Mulvany is confident on the ball and he has very good vision.  He partners well with Jordan Rose.

Rose is a crafty, smooth player.  He receives the ball with a soft touch, but changes directions instantaneously and accelerates out of the turn.  He’s very good.

Brad Walker is a big, physical player who is hard to beat in the air.  His foot speed is my primary question – but if former Old Dominion David Horst can play in MLS – so should Walker.

Another defender good in the air is Sam Brooks, but he is to blame for the Winthrop goal by a careless back pass that didn’t get to his center back was intercepted and converted into a goal.  Pretty sloppy play.

Cameron Wilder is eager to get forward.

Chad Asher and goal keeper Tyler Beadle need to pretend that they’re on the same team.  Asher ignored Beadle’s call for the ball in the 20th minute, causing confusion.

Tyler Riggs was active and dangerous against East Tennessee State University with a spectacular move to create space before unleashing a powerful shot.  I don’t recall Riggs playing in the first game.

Shaun Deliberato gets his head up quickly, but needs to get stronger to not be muscled off the ball.

David Harrison needs to come to the ball – while watching the pass coming to him, Kentucky lost the ball to East Tennessee State University that led to the winning goal. 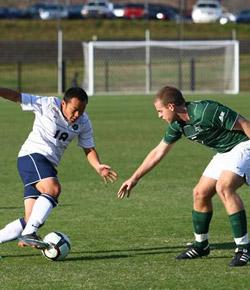 East Tennessee State was one of the teams that I was excited to see, because I didn’t get to see them in 2010 and I had read many positive reports.  So, I was disappointed after the first game wondering if it was just hype.  However, I could see a glimmer of hope that encourages me to find a way to see them in the fall.

The first goal was scored by David Geno from a 19 yard free kick against Kentucky in the 17th minute.  Geno hooked the ball around the wall into the far side.

The winning goal against Kentucky was scored by Theo Yang in the 45th minute.  The play started with Kentucky holding the ball – it was passed to Kentucky’s David Harrison, but Nick Dykes went hard to the ball, intercepting it and quickly got it forward.  Yang timed his run, beating the off-side trap and scampered 25 yards unchallenged before slotting the ball past the on-rushing goal keeper.  I was surprised that no Kentucky defender tried to pressure Yang.

East Tennessee State got better every half until the final half – where they may have been about equal.

East Tennessee State has a taller team that many other teams.  They have a good mix of technical skills – but are still searching how to solidify the defense with the departure of graduated senior Guilherme Reis.  Against Charlotte, the defense didn’t smoothly hand off attackers – lacking communication and understanding.  It was better against Kentucky.

Additionally, East Tennessee State did not know how to break-down a well-structured Charlotte defense.  They just ran out of ideas - specifically, Blaike Woodruff and David Haba.   Woodruff was more confident against Kentucky – playing simply.  Against Kentucky, Haba was finding the defensive gaps and delivering passes to these gaps.

#22 – Big Red Head Kid is a solid defender but he doesn’t have quick feet.

While #1-James Holt didn’t start either game, I have the most confidence in him rather than Ronnie Hreha or Steven Matlock.  Holt made several good saves in the beginning of the second half against Charlotte.

Left back Nate Hodges takes many of the free kicks.  In the 2nd minute against Charlotte, he found Geno that the Charlotte goal keeper made a good play to keep the game scoreless.

Aaron Schoenfeld is a tall target who gets up very well.

Itode Fubara has unbounded energy, getting around the field with urgency.  He had trouble finding his team mates in good attacking positions. 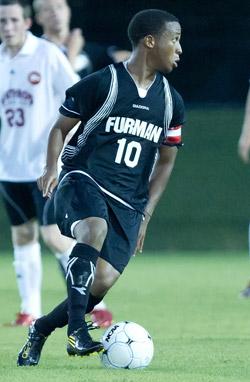 Dane Roberts, Furman
Furman was thrashed by a very good team but was able to pull out a victory on a late goal to get 3 points. Furman was better than I’ve seen them in recent years.

The lone goal was scored by incoming freshman Walker Zimmerman against NC State in the 67th minute (remember, only 70 minute games).  The play started with Zimmerman hitting a shot that was blocked and Jacob Brown controlled the ball and sent it back to Daniel Hojaij.  Hojaij looped in an accurate pass that Zimmerman hit first time out of the air and it scorched the back of the net.  Nice goal!

Hojaij knows how to play.  He was unphased with 4 Charlotte defenders around him with the ball at his feet.

Amadu Ndiaye explodes up the sidelines, getting forward from his left back position.  He has a tremendous motor.  He is unafraid to go hard into tackles. Ndiaye has potential.

In the 62nd minute against NC State with the ball rolling out-of-bounds, Michael Radecke made a foolish tackle slide tackling Wolfpack left back Gbengha Makinde from behind.  Radecke received the deserved yellow, but it’s such a dumb play.

Dane Roberts earned a red card for retaliation against Charlotte’s Charles Rodriguez.  Roberts has superior technical skills, but is very slight of build.

A missed tackle by Nicky MacKain on Charlotte Donnie Smith appeared to lead to a goal, but #28 (no name) saved the goal.

Emmu Wakai has speed to burn, but I was surprised (and I think he was too) that Makinde was able to match his pace.  Wakai needs to get his head up on the dribble.