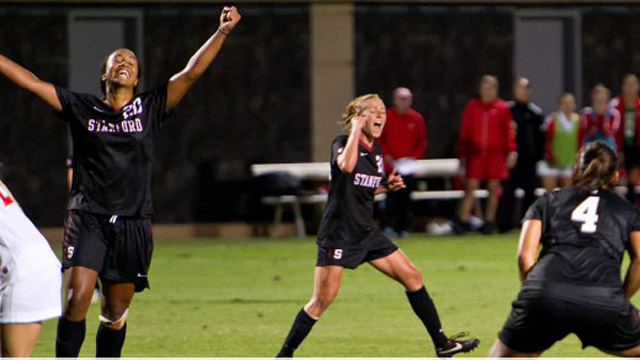 The field has been set for the NCAA Women’s Soccer Tournament. The 64 teams were announced Monday afternoon by the organization, and it seems the pattern this season was to revert wholly to form as defined by the Ratings Percentage Index.

The seedings and especially the opening-round pairings are as much about geography and reducing travel costs as they are creating a perfectly balanced scale of matches round-by-round based on a team’s perceived quality.

This weekend will bring opening round games, and then groups of four will gather at hosting sites for second and third round matches next weekend. The College Cup is in San Diego Nov. 30 and Dec. 2.

Following is an overview of the pairings and seeds, as announced today. Click here for the complete bracket.

Paul Ratcliffe’s Cardinal continue along at the top of women’s college soccer world. The current crop of seniors just finished a 40-0-0 run over four years of PAC 12 play. That same group will now attempt to reach a fourth consecutive College Cup final and to repeat as national champions.

This team continues to play an attractive, possession-based style, outscored opponents at a 4-1 clip, has a broadly-balanced attack with 7 players scoring between 4 and 7 goals, defends resolutely and by the way had one of the best goalkeepers in the country in Emily Oliver.

In fact the most notable thing about this year’s team may be that they actually went a few weeks away from the #1 spot after an early loss to West Virginia and a draw with Boston College. Florida State was #1 at that point and despite the seedings, a matchup between the Cardinal and the Seminoles might still be the most intriguing potential contest out there.

Make no mistake however; Stanford is the favorite to win another championship.

Mike Friesen’s Aztecs have been on a roll, winning the past 12 games in a row. Rachel Boaz has a 0.49 goals against average in net, while Megan Jurado has been an offensive force with 14 goals and 9 assists thus far.

Jennifer Rockwood’s Cougars play in the tough West Coast Conference, played a tough non-conference schedule and just keep coming up winners. Rockwood told us earlier in the season that she tweaked the team’s system to be more offensive-minded based on this season’s personnel, and the players have clearly flourished under it.

If BYU manages to hold true to form and reach the College Cup, the school’s policy of not playing games on Sunday would come into direct conlict with the NCAA schedule. For early round games over the years, they’ve been permitted to adjust and play a day early, but the College Cup includes a national television contract and a Sunday final. Cougar fans are hoping their team makes the potential dilemma a reality.

Marquette Golden Eagles’ coach Markus Roeders told us earlier in the season he is OK with flying somewhat under the radar. This would have been increasingly difficult after another good regular season  punctuated by a Big East Conference Tournament crown, but the Selection Committee still somehow pegged this team as a 4th seed in their bracket.

Outscoring opponents 53-12, Marquette likes to get the ball and keep it. Roeders calls holding midfielder Aly Miller the heart and soul of the team. Center back Emily Jacobson also plays a vital role in a 3-player back like. Offensively, Taylor Madigan and Maegan Kelly lead the way, with strong support from Kate Reigle, Rachael Sloan, Rachel Brown and a number of others. Megan Jaskowiak and Katie Hismeh join Miller and Jacobson in the defensive effort, with freshman Amanda Engel starting in goal.

The most successful program in just about any college sport anywhere has had a tough year, but still managed a 2nd seed for the tournament.

Failing to win the NCAA Tournament this season would mark the only time in the program’s existence that it hasn’t won a title for three consecutive years. Anson Dorrance’s team has looked excellent at times, but has struggled for consistency.

Erica Walsh’s Nittany Lions took a few bumps on the head, literally, in a Big Ten Tournament semifinal loss to Illinois, but the squad is reportedly back at near full health going into the proverbial big dance.

Offensive trio Christine Nairn, Mallory Weber and Maya Hayes will have to be on song for the team to progress to the College Cup, but there is a deep pool of talent in State College, and players like Maddy Evans, Emily Hurd, Tani Costa, Taylor Schram,  Kori Chapic, Racquel Rodriguez and Bri Hovington will be key as well.

Steve Swanson spent the opening weeks of the season winning the FIFA U20 World Cup with as head coach of the U20 Women’s National Team. Now the Cavaliers are putting it all together at the right time, winning 6 of their last 7 games including the ACC Tournament.

#1 for much of the season, Mark Krikorian’s Seminoles have hit a few speed bumps late in the season, but remain one of the top contenders to win the biggest prize of all.

After struggling a bit early, the Gators have pulled into high gear, as evidence by a convincing sweep of the SEC Tournament.

Becky Burleigh’s squad relies on a calm, rexlaed passing game, as she explained to us earlier this season.