For college soccer teams, the spring season is the chance to lay the groundwork for a successful fall season.

Without the busy grind of a regular schedule, the spring affords coaching staffs the opportunity to fine-tune numerous aspects of their team. It can range from anything to tactics, fitness, to team psychology and team building.

The Loyola-Chicago women’s side made that last element the centerpiece of a trip overseas during its spring season, traveling to Italy for spring break and an opportunity to get to know another country – and each other – a bit better. 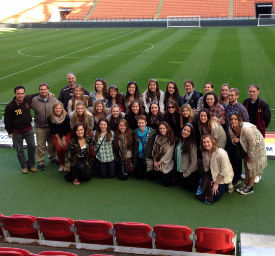 “For them, this experience was more about seeing a different culture and seeing a beautiful country in Italy,” head coach Barry Bimbi told TopDrawerSoccer.com. “We kind of put the soccer part of it on the back burner and definitely focused more on the cultural side.”

Jumping around to five different cities during the weeklong trip, Loyola(w) had the opportunity to see as much of Italy as time provided in that small window. They hit several of the main tourist cities the country has to offer: Rome, Milan, Florence, Venice, Vatican City. Being a Jesuit institution afforded the team VIP access to some of the churches and museums, not to mention a private tour of the Vatican, as they were accompained by Rome native Father Stefano Del Bove, who works in the Loyola athletic department as the Associate Athletics Director for Community Engagement.

Naturally, soccer wasn’t an afterthought. The team trained during the stop in Florence, and played against Fiorentina’s women’s side. Training and playing in a soccer-mad country offered a different dimension to the trip, giving the team a glimpse of how soccer is viewed in a place like Italy.

“When we had the training session at Coverciano, the Italian national training center, and had a private tour of their soccer museum, that kind of opened their eyes to the possibilities in soccer,” Bimbi said. “Being two inches away from a World Cup trophy, sitting there looking at [Fabio] Cannavaro’s game-worn jersey from the World Cup final, those kind of experiences, the girls I think really opened their eyes.”

In Milan, the team also toured the San Siro (Inter and AC Milan’s shared stadium). The Serie A schedule conspired against them, however, as a late change meant that they missed the Roma-Inter Milan match they were supposed to catch after first landing in Italy.

They did get to see a Serie B game between Novara and Spezia, an experience that reflected how male-dominated soccer is in Italy.

Upon the return to Chicago, they completed a competitive spring schedule with games against Northwestern, Purdue and Cincinnati, to name a few. Bimbi saw a bit of a different edge to his team both in training and during the games.

“I think it gave the girls confidence, doing the trip and then coming back,” he said. “They realized not everyone gets to do this, so it was a privilege for them to do the trip, and they kind of brought that attitude back to training, they focused a little bit more on the details of things and it definitely got better as a group during the spring.”

Bimbi is hopeful that the work completed to put the trip together – the players had to help in fundraising efforts to make it possible – will instill a work ethic that aids players on and off the field.

“We worked really, really hard to give the girls this experience and I think that’s something that’s a lesson for them going forward whether it’s in soccer or in life – if you put your mind to it and you work hard, you’re going to get positive results for sure,” he said. “Hopefully we can keep relying on that, let’s work hard and good things are going to happen.”