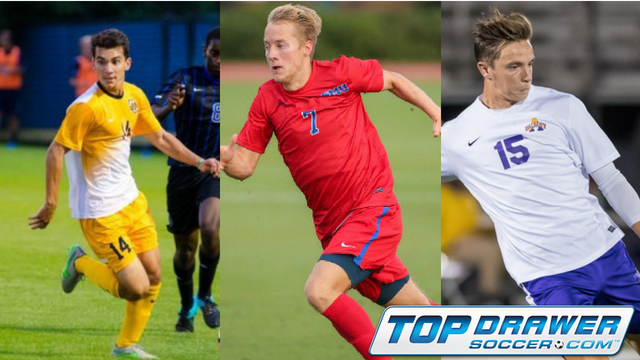 What happened in 2017: Albany won its second straight America East conference tournament title after Vermont finished atop the regular season standings. New Hampshire joined them in the NCAA tournament, making it all the way to the Third Round before exiting.

What to expect in 2018: It should be another competitive race, with Albany perhaps edging the field as favorites before things kick off. Massachusetts-Lowell has an impressive roster of returning talent, while the same could be said of New Hampshire. Vermont and UMBC both have intriguing players that indicate the team could shock.

What happened in 2017: Dominant form at home played a key role as SMU won the regular season by three points over UCF. Connecticut and Temple came closest, with South Florida behind. The Mustangs went on a nice run in the NCAA tournament, making it to the Third Round before losing to College Cup side North Carolina.

What to expect in 2018: SMU lost big pieces from last year’s side, with Jordan Cano and Mauro Cicero perhaps the most notable. They bring plenty back, including Garrett McLaughlin, one of the top forwards in the country. The regular season race could boil down to a two-team race, with UCF well-positioned as well. Connecticut and its storied traditions can certainly thrust itself into the conversation, while South Florida’s a team on the rise under Bob Butehorn. Temple enters the season under new head coach Brian Rowland.

What happened in 2017: It was an extremely close regular season race, with Massachusetts edging the field, just ahead of VCU, George Washington, Dayton and Fordham. VCU and Fordham joined conference champions Massachusetts in the NCAA tournament, with the Rams progressing furthest; they made it all the way to the quarterfinals, losing to UNC.

What to expect in 2018: A league with 14 teams can be unpredictable, with so many possible outcomes and the top eight teams progressing to the conference tournament. Umass, VCU and Fordham look primed to return to regular season contention; GWU lost a decent level of talent from its senior class. Rhode Island could be a program that jumps into title contention.

What happened in 2017: A close conference race saw Stetson edge a field of Florida Gulf Coast(m), NJIT, North Florida and Jacksonville. A pair of underdogs made it to the Conference Championship, as Lipscomb edge Jacksonville in the final to advance to the NCAA tournament.

What to expect in 2018: It could be anyone’s chance in the regular season, with all of last year’s contenders just as likely to repeat in the upcoming season. Florida Gulf Coast(m) has been the historically dominant program in the league, though that may no longer be true. It’ll be interesting to see how Liberty fits into the mix after joining the Atlantic Sun. With a 10-6-1 record last year, they are no slouch.

What happened in 2017: After Butler picked up the regular season title ahead of Georgetown, the Hoyas edged Xavier in the title game to secure the conference tournament crown.

What to expect in 2018: Another close race should see Georgetown, Butler, Xavier and Creighton emerge among the contending sides. The Hoyas bring back plenty of experience, with the usual gaps to fill, particularly in goal after J.T. Marcinkowski left early to turn pro. Providence has some pieces and experience to make a run, while Marquette and St. John's have some intriguing elements.

What happened in 2017: High Point more or less ran away with the regular season title, holding a four-point lead over Radford at the end of the regular season. In the conference tournament, a Cinderella run from Presbyterian saw the Blue Hose emerge with the team’s automatic bid.

What to expect in 2018: The league swapped out Liberty for USC Upstate, as both programs moved leagues. That shouldn’t have a huge impact on the title race, which is likely to favor High Point and Radford once again. Campbell, third place finishers, have some firepower and can seek to knock High Point off the regular season summit.

What happened in 2017: UC Davis ran away with the Big West North regular season title, finishing seven points ahead of UC Santa Barbara. In the South, Cal State Fullerton and CSUN finished tied with 14 apiece. Fullerton emerged victorious during the conference tournament, losing 2-1 in the first round of the NCAA tournament to Pacific.

What to expect in 2018: The big change in the Big West this season is the move to a single table, playing seven conference games instead of the North/South split. With nine starters back in the mix and a recruiting class low on quantity but high on quality, Cal State Fullerton enters the season as favorites. However, it’s worth noting that UC Santa Barbara added the likes of Carson Vom Steeg and Faouzi Taieb to its back line, as they seek to make a run to the College Cup. UC Davis brings back Defensive Player of the Year Roy Boateng and Nabi Kibunguchy. CSUN returns Goalkeeper of the Year Henrik Regitnig, while UC Irvine should only continue to get better as head coach Yossi Raz enters his second season in charge.

What happened in 2017: James Madison beat out UNC Wilmington, the College of Charleston, Hofstra, William & Mary and Elon in what was obviously a tightly-contested regular season race. Only five points separated JMU in first from Elon in the top six. William & Mary’s Antonio Bustamante then caught fire in the CAA tournament, leading the Tribe to the NCAA tournament.

What to expect in 2018: Given the way William & Mary finished last season, and the fact they return eight starters, the Tribe enter this season as the slight favorites. But if last year is anything to go off, there won’t be much separating the teams. UNC Wilmington brings back four of its top five scorers, while JMU is now led by former assistant coach Paul Zazenski, who took over at the start of August. Hofstra, College of Charleston, Delaware and Elon had solid defenses last year, something to build on as the new season begins.

What happened in 2017: A tremendous season by Florida International culminated with the program edging Old Dominion in the standings, winning by a two-point margin. The pair earned spots in the NCAA tournament after ODU defeat Charlotte in the conference tournament final.

What to expect in 2018: Another close race should be on the cards, with FIU earning the edge as favorites. Charlotte, under head coach Kevin Langan, always seems to be in contention, while Old Dominion brings back plenty of talent. A team like Kentucky could sneak into the mix if things go well. It’s an interesting year for the conference, with New Mexico likely to lose its men’s soccer program at the end of the season.

What happened in 2017: A tremendous conference season from Wisconsin-Green Bay propelled them to the regular season crown, finishing with a 7-1-1 record ahead of UIC, Wisconsin-Milwaukee and Wright State. In the conference tournament, UIC managed to come away with the conference’s automatic bid.

What to expect in 2018: There’s no certainty to the outcome in this season, and last year’s contenders must reshuffle starting lineups. Cleveland State has a number of All-Conference honorees back, leaning strength to the idea that they could play their way into contention. UIC and Wisconsin-Green Bay are two sides that appear to be favorites on paper, as there should be no massive shakeup at the top.