Men’s Team of the Week: September 24 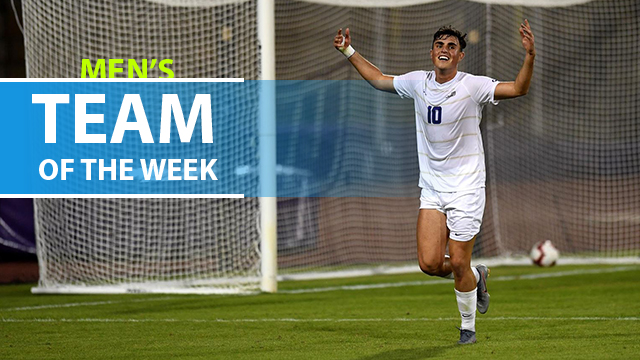 Only a few weeks into the season, James Madison is showing that last year’s NCAA tournament run is no fluke.

The Dukes upset Wake Forest last Tuesday, thanks in large part to the play of Manuel Ferriol. A senior midfielder from Spain, Ferriol scored a free kick in a 1-0 win against the Demon Deacons. He followed that up with a hat trick in a win over Mount St. Mary’s.

PUT IT ON THE BOARD! Manuel Ferriol takes the free kick and puts it in the back of the net!#GoDukes pic.twitter.com/87EbErhayQ

Check out some of the other standout performances from the past week of men’s Division I college soccer.

GK Arie Ammann, Pittsburgh – After entering against Delaware in a 3-3 game when goalkeeper Alexander Steinbach came out with an injury, on September 9, Ammann’s started all three games since. Last week, he made four saves apiece last week in a home win against Akron and on the road in an ACC opener versus Boston College. Ammann kept clean sheets in both, and will look to maintain a hot run of form.

D Delentz Pierre, Portland – The freshman defender helped secure a 3-1 win against a ranked opponent, opening the scoring and helping the WCC side hang on for the win.

D Patrick Wilkinson, Saint Louis – A junior defender from Kansas, Wilkinson anchored SLU’s back line during a pair of shutout wins against Tulsa and Davidson. The defense conceded just four shots on goal in the two games.

M Narciso Cervantes, Loyola Marymount – In a pair of shutout wins last week, Cervantes played every minute. In a 2-0 win against CSUN, he scored a goal and had an assist.

M Niko Petridis, St. John's – Featuring in a substitute role last week, Petridis came off the bench scoring three goals and adding two assists in wins over Columbia and Xavier. In both games, he accounted for the winning strikes, and now has four goals and three assists on the season.

M Manuel Ferriol, James Madison – The Spanish midfielder is on a goal-scoring tear, with eight overall in the 2018 season. Seven have come in the past four games, as JMU has won five games in a row.

M Matthew Moderwell, Northwestern – In a big 3-1 road win in College Park, Moderwell scored the winning goal and setup another.

M Stuart Wilkin, Missouri State – Another senior that enjoyed a big week, Wilkin nabbed goals in both games for the Bears as they extended their winning streak to six games on the season.

F Cal Jennings, UCF – Now tied for the national lead in goals scored with eight, Jennings scored three times in two games last week. Both were wins, away from home at FGCU and a home victory over South Carolina.

F Garrett McLaughlin, SMU – A sensational senior season continued for McLaughlin as well. He now has six goals and an assist after tallies against Duke and Denver on the road. His overhead kick game with just about two minutes left to tie the game, with the Mustangs going on to win 2-1 in overtime.

F Lucas Meek, Washington – After making just one appearance last fall, Meek is making the most of his time on the field. He scored the winning goals in two Pac-12 games at home. Starting both games, he tallied versus San Diego State and UCLA, playing just 58 minutes in the matches.