There’s a new face in the Mid-American Conference.

West Virginia is the new program in town, looking to unseat what has been an Akron-dominated league for the last five years or so.

The addition of a program like WVU is a welcome one, especially from the Zips perspective.

“I think what it’s going to do is going to force us to be better and I think that will force everybody else to be better,” Akron head coach Caleb Porter told TopDrawerSoccer.com earlier in the year. “I think it’s a great move, we’re really excited to have them in. Certainly won’t make it any easier, but that’s what we want.”

It’s going to be quite the challenge for any of these programs to try and hunt down the Zips, of course.

Defending their national title proved to be a bridge too far for Akron last fall, but the team was pleased that the team didn’t slip too far after so many changes.

“Looking back, even though we fell short for us to be 15-4-4 with essentially eight new starters and to make it to the round of 16, one goal away from being in the round of eight, I think we felt like that was a pretty good step in the right direction,” Porter said. 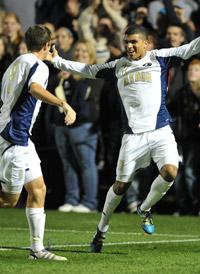 With that year out of the way, and eight starters back for this fall, optimism is high that the team will have learned from last year and can jump back into contention.

“Certainly we weren’t the favorite by any means in all honesty, probably weren’t where we needed to be to win the championship, but we were at least in the conversation there at the end,” Porter said. “That allows us this year I think to really make a strong push to get our second star on the jersey.”

And the talent at Porter’s disposal will once again be hard to beat. Returners include midfielder Scott Caldwell, defender Chad Barson and goalkeeper David Meves, all returnees from the title-winning team.

With added newcomers like U.S. youth internationals Dillon Serna and Alfred Koroma, and Toronto FC Academy product Omari Morris jumping into the fold, don’t be surprised to see another Akron run deep into the NCAA Tournament.

Could Northern Illinois throw a wrench in Akron’s plan of dominance?

The Huskies took advantage of the Zips’ slip up in the conference tournament to punch a ticket to the NCAA Tournament after an impressive season, regardless of the conference honor.

Plenty of that talent is back for 2012 as well, including Isaac Kannah, who enjoyed a strong freshman season, and James Stevenson, the team’s leading scorer from a year ago.

Hesch will have his hands full trying to keep pace with the likes of Akron, but he does have a decent core returning from last year’s team with only two senior starters from a year ago graduating.

There’s a number of seniors who will look to step up this fall, including forwards Maksym Kowal, Joey Merlo, along with Risto Latti and Patrick Ryan.

The inability to start quickly limited the Broncos to a middle of the pack finish – not to mention the loss of leading scorer Shane Lyons 11 games into 2011.

They did pick themselves up enough to upset Akron in the MAC Tournament on penalty kicks, and with Lyons looking to return to the fold, this year could bring better fortunes.

Five games winless to wrap up the 2011 regular season did Hartwick no favors and cost them the chance at the MAC tournament.

With experience on their side this season, and a recruiting class featuring a trio of internationals, there’s a chance the Hawks could put in a much-improved 2012 campaign.

Leading the charge will be Greg Mathers, whose 8 goals from last year led the team, and complimenting him will be midfielders Simon Greatwich and Will Broomfield. All three will be seniors and play a critical role in the upcoming season.

A promising start to last season was derailed by the conference schedule, as Bowling Green could only muster four points in MAC play.

That’s a total that must come up if the program hopes to keep improving, and it’s going to take big efforts from players such as sophomore midfielder Danny Baraldi and junior Brandon Silva to keep things trending upwards.

Some of the best weapons FAU had to offer have departed, leaving a gaping void in the offensive end of the field with the graduation of team leading scorer Darnell King.

It’s up to some of the players who didn’t see significant minutes last year, such as midfielders Alex Royer, Martin Nesic and Sean Gossman to truly step up, fight for playing time and attempt to improve the program.

With the football program jumping ship from the Big East, West Virginia had to look for a new conference home for the immediate future.

The search led them to the MAC, and their entrance makes the conference a stronger place for all involved. Of all the teams in conference, the Mountaineers look to have a solid shot of competing with the Zips, as there is plenty of senior talent, such as attackers Peabo Doue, Uwem Etuk, Shadow Sebele, midfielder Travis Pittman and central defender Eric Schoenle.

Needless to say, there’s a lot of optimism in Morgantown.

“I don’t know if I’ve ever been as excited for this season as I am with this group,” head coach Marlon LeBlanc told TopDrawerSoccer.com. “This is a group we’ve obviously invested a lot in over the last four years, where a number of these players have been starters from day one.”

That senior group, along with sophomore forward Andy Bevin, as well as some strong freshmen talent, give this Mountaineer side plenty of talent to try and keep pace with the high-flying Zips – but LeBlanc thinks that big things are head regardless of how things play out in the MAC.

“This one, I think on paper, is a legitimate contender and going into this year our feeling is that this could be one of the best teams we’ve probably every put out in this program,” he said.