Disclaimer:  In the spring, players change numbers, new transfers and incoming freshman start playing.  Rosters are not updated/nor provided.  I assume that I’m going to mis-identify some player because of this limitation.  Send me an email at mauceri@topdrawersoccer with the correct identification, if you uncover an error or omission.

NC State lost a point on a spectacular late goal, but they played well enough to get a scoreless draw.  2 scoreless draws would highlight their scoring deficiencies. New head coach Kelly Findley has his work cut out for him, but I have confidence that he’ll be able to build a better team though it may take a few years to get the right players into his program. 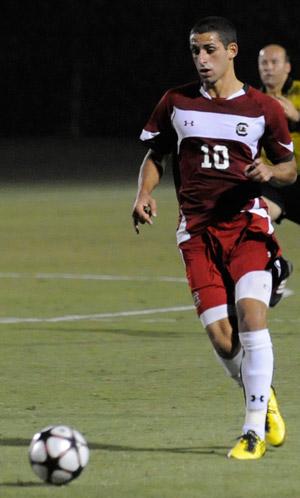 The defense seems fairly set with Gbengha Makinde, Sonny Mukungu and John Lung’aho.  Makinde is the one player in this tournament that I feel comfortable projecting to be an MLS player. He has superlative speed and he has terrific balance.  My only concern is that he has spindly legs.

I have a close friend that adores tall, athletic center backs that lack technical skills.  I surmise that he’s going to like Sonny Mukungu.

Goal keeper Vasilios Dimopoulos did well.  Against Old Dominion, he stopped a breakaway on Gideon Asante.  I don’t blame him for the one goal that was scored against him.  It was a rocket!

In the 42nd minute against Furman, Nazmi Albadawi got the ball to Nader Jaibat but his powerful shot was far off target.

South Carolina lost a lot of senior leadership especially up top and were not able to generate a goal in either game.

Taking my role as “Mr. Johnny Sunshine,” South Carolina has the opportunity to build their team in the spring with new players taking on larger roles in the fall than they did last fall.  This may be the plan, but I would prefer that my team could execute and finish on their shots and defensive mistakes were eliminated.

One of the players being asked to take a larger role is goalkeeper Alex Long.  He’s replacing a quality 4-year starter, Jimmy Maurer.  Long played well. He moves well and he has good hands.  I think he’s going to be ok.

Stephen Morrissey was holding onto the ball too long, but I like the way that he closes on the ball.

Bradlee Baladez straddles the defensive holding line trying to get behind the defense.

Will McGinnis kept finding space outside the box in the 2nd half against UNC-Wilmington.  I like the way that he plays.

Luke Berson was holding the ball too long with targets in the box in the 2nd half against UNC-Wilmington.

Winthrop was woeful.  They started slow and continued to digress.

The lone goal was scored by Josh Goldstein picking off a sloppy pass and chipping the goal keeper from 25 yards against Kentucky in the 10th minute.

The primary deficiency was that Winthrop allowed attackers to roam around their box unmarked.  It was too easy to run up the score if you don’t mark attackers.

The other thing is that the players didn’t play well, even the players that I know (because I’ve seen them) can play were off their game.

The best Winthrop player was Miguel Casajuana (former grad student who has used up his eligibility) after refereeing a boys match on an adjacent field, walked over and was inserted into the line-up against Kentucky to solidify the Winthrop play.  He did, making several decisive passes.

Goal keeper Enrique Miranda stopped numerous shots – but if his defense lets players shoot without pressure – eventually a shot is going to go in.  Miranda was injured when College of Charleston forward Eric Fornell let the ball get away from him on a breakaway, but decided to slide into Miranda late.  Fornell should have been tossed, but was shown a yellow and Miranda went to the bench.

I like the way that Tomas Brennan plays.  He sits back very deep, assessing the field and he’s willing to take a long run into space.  Brennan is good on the ball.

Daniel Di Biagio is easily frustrated.  When he does, he is apt to make a nasty tackle.  Against College of Charleston in the 50th minute, Di Biagio tried to dribble out of his box, but was stripped by Andy Craven (I hadn’t noticed that he was playing).  Craven’s shot was wide.

One of the best attacking sequences started with Mpumelelo Matutu feeding Brennan into space that Brennan crossed to Pullin with a diving header flicked for a corner kick.