Friday marks the official start to the 2013 women’s Division I NCAA Tournament, as the top teams go dancing. The College Cup in Cary, N.C. is the obvious target for programs, as the grind of the postseason officially comes to the forefront.

The obvious story of the bracket is the ACC-heavy nature of the top seeds, with all four No. 1 spots going to programs from the conference. Can all four make the College Cup? It’s not out of the question.

Virginia: The chance at an undefeated season is no more after Friday’s shock 4-2 loss against in-state rivals Virginia Tech. That shouldn’t prevent the Cavaliers from contending and putting together a deep run in the tournament. They should be rested and refreshed for the run, with midfielder Morgan Brian, forward Makenzy Doniak and defender Emily Sonnett prepared to steer the Cavs to Cary. Hosting every game in the run up to the national semifinals is a definite boost, as they posted a 14-0-0 mark at Klockner Stadium this season. 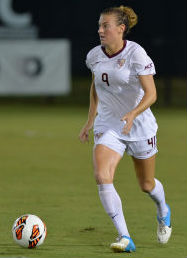 North Carolina: There’s little to add about the defending champions, as head coach Anson Dorrance eyes up another run at a title. There’s obvious incentive for the Heels to make the run to Cary, considering that they can pack the place and create a home field advantage for the December stretch. They’ve got to get there first, and the burning question is the health of Crystal Dunn. The standout midfielder missed Friday’s ACC semifinal with a hamstring problem, and the Heels indicated that she could miss up to two weeks (possibly three tournament games). The team is good enough at the back to keep it close – defenders Hanna Gardner and Megan Brigman have anchored a stout defense – so the scoring burden will fall on the shoulders of Kealia Ohai, Summer Green and Amber Munerlyn.

Virginia Tech: A battle-tested squad for sure, the only knock on the Hokies is that they lack the experience that some of these other programs bring to the postseason. But they certainly are dangerous enough to overcome that hurdle, with a strong attacking trio of Jazmine Reeves, Ashley Meier and Murielle Tiernan. The speed of Reeves proved to be vital against a team like Virginia, and if she can heat up and find space, the Hokies are likely to go far.

UCLA: Looking to wreck the ACC party in the College Cup will be the Pac-12 champion Bruins. With as strong a spine as they come – goalkeeper Katelyn Rowland, center back Abby Dahlkemper, midfielders Sam Mewis and Sarah Killion, with Darian Jenkins and New Zealand international Rosie White up front – the talent is there to string together postseason success. Getting a No. 2 seed might add a chip on their shoulder, and the Bruins are sure to be hungry to prove something against ACC counterparts. They finished the regular season tied for the second fewest goals conceded on the year with seven, and can go out and prove the sports cliché that defense wins championships.

Florida State: Can the Seminoles make yet another appearance in the Final Four? The lack of a premier goal scorer is perhaps the team’s only chink in the armor. But with a defensive corps led by Kristin Grubka, Kassey Kallman and goalkeeper Kelsey Wys, they remain close in every game and always seem to get goals at the right time. Provided that formula continues, it’s hard to see them falling before Cary.

UCF: The response to a new coach by the Knights has been fantastic – Tiffany Roberts Sahaydak helped take things to another level this season, winning the American Athletic regular season and tournament titles. A lot of that is down to the solid back line, led by All American center back Marissa Diggs. There are enough dynamic, attacking options up front in Tatiana Coleman, Kayla Adamek and Lena Petermann. The concern from the AAC tournament title is that they failed to score across two games in the semifinal and final – but it did provide ample and successful penalty kick tests.

Michigan: One of the stories of this season has been the rise of the Big Ten. And while none of the programs landed a top seed, the Wolverines represent one of the conference’s chances to go deep. In forward Nkem Ezurike, they have a game-changing forward, while freshman Madisson Lewis provides a speedy option to stretch defenses. At the back, the guile of defender Shelina Zardosky leads a solid back line, while the experience of Holly Hein is sure to be an asset. Goalkeeper Taylor Bucklin is only a freshman, but she’s conceded just nine goals on the year.

Portland: Rolling back the years and aiming to make a run at the national title, the Pilots do have intriguing pieces to bring to the table. They’ve got experience (Micaela Capelle, Ellen Parker, Emily Sippel, Amanda Frisbie and goalkeeper Erin Dees) and some fantastic freshmen (Allison Wetherington and Dancia Evans). Navigating the way to Cary isn’t going to be easy, but the group is capable of it on paper.

Nebraska: It’s been a great run for the Huskers, who won both Big Ten titles. Now the question is just how long it can last. There are intriguing pieces in place that are capable of continuing success. Offensively, Jaycie Johnson, Jordan Jackson and Mayme Conroy supplied 32 of the team’s 49 goals on the year, while Ari Romero is the backbone of defense and goalkeeper Emma Stevens provides solid hands. There can be no drop off in the tournament or margin for error, but the Huskers have shown that if they can sustain this level of quality, anything can happen.

Penn State: The 2013 campaign hasn’t been what the Nittany Lions likely planned for, as a somewhat leaky defense cost their chance at another Big Ten regular season title. That doesn’t mean they couldn’t go on a run. Forward Maya Hayes has 19 goals on the year and needs to crank things up in the final third in order to go far. Tani Costa, Mallory Weber and Raquel Rodriguez Cedeno provide a talented offensive scoring cast, so the challenge will be at the back and how things come together there is doing to dictate how long the postseason lasts.

West Virginia: The Mountaineers could feel slighted for not being amongst the seeded teams, having won both conference crowns, and boasting talents such as Frances Silva and Kadeisha Buchanan. A lack of marquee wins outside the Big 12 is a likely factor, as they went winless in games against Penn State, Duke, North Carolina and Kentucky. That being said, there is talent in this group – though they first need to win this weekend’s opener against Rutgers, and then would likely face No. 1 seed Virginia Tech in the second round. So it surely won't be easy, but the Mountaineers could certainly turn some heads.

Notre Dame: It’s been an up-and-down debut season for the Irish in the ACC. Notre Dame has shown quality in patches, but a five game winless streak in conference play soured proceedings. That being said, if you’re looking for an unseeded team to go deep, the Irish aren’t a bad bet. Coached by experienced former Baylor skipper Randy Waldrum, the rigorous test of the ACC is likely to have the team better equipped to spring some upsets. There’s quality all over the park as well, with Mandy Laddish, Cari Roccaro, Morgan Andrews, Katie Naughton and Sammy Scofield capable of producing high-level soccer. Ensuring consistency and learning the lessons of the regular season is vital, of course, as things start off difficult with a matchup against Iowa on Friday.

MF Crystal Dunn, North Carolina: A hamstring injury kept Dunn out of the ACC semifinals – the Tar Heels lost to Florida State in overtime – and for a team that has struggled to score goals at times, if her absence extends deep into the tournament, chances of a repeat are going to be long.

F Rachel Daly, St. John's: The national goal scoring race could be determined in the opening round of the tournament. Daly is tied with Savannah Jordan for first in the country, and will need a huge game on Saturday if the Red Storm is to knock off UCF and challenge for the scoring crown.

D Abby Dahlkemper, UCLA: Leading one of the best defenses in the country, the Bruins star has a great opportunity to lead her team on a marauding run through the NCAA tournament. Dahlkemper can do it all: defend 1-vs-1, distribute the ball and provide vocal leadership. She’ll need to come up big in order for the Bruins have a chance at making that cross-country flight late on in December. 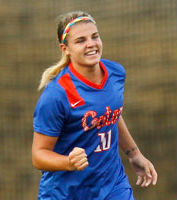 F Savannah Jordan, Florida: A sensational freshman season is already accounted for with Jordan, as the Gators put together a solid campaign. The loss of Havana Saloun – who was injured in the SEC tournament title game – lengthens the odds of a Gators College Cup appearance. Jordan can try and help make up for the absence.

GK Sabrina D'Angelo, South Carolina: Arguably the best goalkeeper in the country, D’Angelo has lifted the Gamecocks to an outstanding season, and she’ll look to cap that off by standing on her head and leading a deep run into the NCAA tournament. She obviously needs help up front, but strong defenses and outstanding goalkeeping efforts can be the different between the second round and a quarterfinal appearance.

First round matches to watch

Usually the early hurdle for the Broncos to clear is Stanford. With their normal Pac-12 nemesis suffering a bit of a drop off, the first round matchup is against the much-improved Golden Bears. Observers may decry Santa Clara’s status as a No. 4 seed, and Julie Johnston and company will relish the chance to quiet the naysayers with a quality performance against a good California side.

A two-loss campaign like the Hoyas have managed is nothing to gloss over, though a Big East semifinal loss almost certainly cost them a shot at a tournament seed. A first round matchup at Shaw Field is going to be a stiff test, as the Explorers bring a strong and seasoned bunched, anchored by offensive weapons Renee Washington and Kelsey Haycook. Georgetown counters with an experienced nucleus, led by seniors Kaitlin Brenn, Emily Menges and anchored by junior midfield maestro Daphne Corboz. This should be a good one.

Injuries ravaged the Blue Devils this season, limiting their offense and blunting their attack, as the loss of Cassie Pecht was a big blow. A lot of that can be erased with a win against the Tigers on the road, although the Conference USA champions are going to be no pushovers. Midfielder Jessie Ayers will be the focal point for Natasha Anasi and the Blue Devils defense, although Kaeli Vandersluis is another attacking option for Colorado College who can win games.

If the Cardinals are to avoid the upset in the first round, the key is neutralizing a potent Redbird attack. Forwards Rachel Tejada and Hannah Leinert bagged 15 goals apiece, and are the key for Illinois State to extend its nine game winning streak with another win. Louisville will enter this one well-rested after getting upset in the American Athletic Conference tournament quarterfinal. The Cardinals need big-time performances from offensive duo Charlyn Corral and Christine Exeter to balance a defense that conceded 30 goals this season.