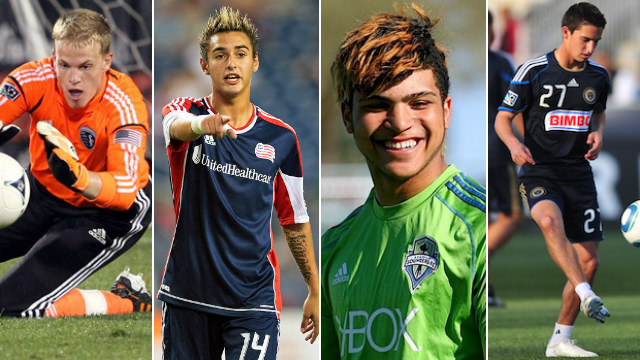 This is part two of the series on the top prospects from every MLS Academy.

Below is a breakdown of the other remaining MLS academies sans Montreal Impact and Toronto FC:

There are some mighty big shoes to fill in New England for the next Homegrown player considering the two that are currently on the books are doing exceptionally well. 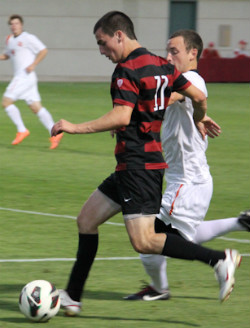 Teenager Diego Fagundez has been the star for the Revolution lately, and midfielder Scott Caldwell has not missed a step in his ascension into the lineup in his rookie season.

Not to say the youth teams in New England are lacking, as both have youth national team prospects and look bound for the Development Academy playoffs this season.

Christian Sady, one of the top recruits for the 2014 class, is well thought of by the Revolution coaches. Sady made his debut with the reserve last season in a game against the New York Red Bulls. He has also played for the U.S. U18 Men’s National Team. It would probably be pretty difficult to talk Sady out of his Harvard commitment.

On the younger sides, talented prospects like Daniel Apajee (a Syracuse commit) and Amadu Kunateh standout from the crowd, but there really is not a clear favorite for the next in line from the Revs. There are a few prospects in the college game that should get more recognition in the coming years as well including Cincinnati forward Cole DeNormandie.

It is difficult to argue against New York Red Bulls as the MLS Academy with the most prospects currently on the books, but the success of those previous players at the first team leaves something to be desired.

With three teenagers now on professional deals, there is opportunity for the Red Bulls to change that perception and integrate the Homegrown talents more effectively to the first team.

After all, New York will have more coming up in the near future.

Georgetown scoring sensation Brandon Allen looks bound for bigger stages than the college game in the future. He is just one of a few Red Bull talents at the collegiate level.

From the youth teams, Adam Najem and Alex Muyl have consistently featured with the reserve team this season with both making three appearances already at this stage. Najem and Muyl will join the college ranks this fall at Akron and Georgetown respectively.

Eric Sa, Ethan Decker, Kevin Politz, and Arun Basuljevic have all featured with the reserves as well this season. Politz and Basuljevic are 2014 recruits, so they will still have some time to climb the ladder next year as well.

The younger squads are loaded with players who have shown qualities of a professional player. Youth national team players Tyler Adams, Chris Lema, Wesley Wade, Derrick Etienne, and Henry Martin are the big names, but others will emerge from the club that has the top team in both Development Academy age groups.

Philadelphia Union will join the Development Academy next season as its own club; thus, ending the charade of affiliates for the Pennsylvania club. The summer will be interesting for Union’s youth program as it sorts through a number of local teams to compile the best group for its academy teams.

Outside of that shuffling of rosters, Union prospects who are graduating in 2013 show the club will be in good hands for the coming years. U.S. U20 MNT goalkeeper Zackary Steffen is the prize of the prospect list, as he is the top rated keeper for his age group in the United States. He is bound for Maryland this fall. Defender Billy McConnell has also impressed with Union’s youth teams during Generation adidas competitions. He is headed to NCAA National Champions Indiana this fall.

Combing through the rest of the rosters of Union’s affiliates reveals a treasure trove of prospects; Brian White, Joseph Julius, Christian Pulisic, and Daniel Barbir to name a few. Whether those players decide to leave their current clubs and join Union’s teams next season is still to be determined.

The Timbers are likely to lose out on Rubio Rubin, the local player who starred with the U.S. U17 MNT over the past two years, as he continues to explore professional opportunities abroad.

However, there is still reason for optimism from the Portland club. Head coach Caleb Porter secured the rights to Bryan Gallego, a center back at Akron who previously played for the New York Red Bulls Academy. Gallego has the smarts to fit into the Timbers style of play at a few different positions.

From the current group of Academy players, Christian Desir, Anthony Macchione, and James Nosack have all made appearances with the reserve team this season. The Timbers Academy is still young, and it will take some time before it catches up to some more established youth setups in MLS.

Real Salt Lake’s best prospect is Jordan Allen. RSL has tried to get him under contract, but it has not worked out. Allen will be with Virgina(m) in the fall, and likely there in 2014 as well.

Unfortunately for RSL, Allen also ties up one of the valuable out-of-territory exceptions (Allen is from Rochester, New York) while they wait for his arrival post college.

There are others in the ranks at RSL’s residential academy in Arizona who are also knocking on the door for a look with the professional side. Marquette recruit Jose Navarro, also known as Coco, has played in four reserve games this season and scored one goal at that level. Academy coaches eagerly sing the praises of Navarro as a perfect representation of what RSL represents – dedication both on and off the field. A strong freshman season with Marquette could speed up his arrival to Sandy, Utah.

Fellow 2013 recruits Andrew Brody (Louisville) and Ive Burnett (South Carolina) have also featured with RSL’s reserves this season. Both are promising prospects for the future, but also players that are classified as out-of-market exceptions.

RSL needs to search its U16 side to find its two best prospects from its territories (Arizona and Utah). U.S. U17 MNT forwards Sebastian Saucedo and Brooks Lennon have been tremendous lately on the international stage. Lennon recently captured the Golden Boot at the Caspian Cup in Azerbaijan.

The Earthquakes have yet to ink a player to a Homegrown deal, but there are possibilities for a first signing in the near future. U.S. U20 MNT goalkeeper Kendall McIntosh is the top prospect from the college ranks. As a freshman, he only started one game at Santa Clara last year, but he should be in line for the majority of minutes during his second season at the West Coast Conference program.

In the Academy, Tommy Thompson is the gem, but he has not fulfilled the requirements for training at this point to qualify for Homegrown status. Thompson is also graduating from high school a year early so he can enroll at Indiana for this fall’s semester, which puts another damper on San Jose’s bid to get him into the first team.

“He has a chance to play in MLS,” Quakes general manager John Doyle told the team’s website. “Watching him, he’s different. I think he’s excellent.”

Thompson has appeared in three reserve games this season including starting a game where he had two assists.

Other academy players Cristian Cruz, Tren Biswell, Eli Padilla, and Trevor Long have also played for the reserve team this year. U.S. U17 MNT midfielder Angel Heredia is back with the club after his stint with U.S. Residency Program. Heredia is one to watch for the future.

Sounders hit it out of the park with their first Homegrown signing, as Yedlin has enjoyed a dream beginning to his MLS career.

Duplicating that is going to be pretty difficult, but there are options including some who played alongside Yedlin a couple of years ago on the original Sounders U18 team. Sean Okoli and Troy Peterson have been solid at the collegiate level through their first two seasons at Wake Forest and College of Charleston, respectively.

Speedy striker Darwin Jones has been delayed in getting on the field with Washington, but he is on to watch this season for Sounders fans. Also in the Pac-12, Stanford winger Aaron Kovar has been impressive with the Cardinal.

The top prospect from the youth team is Jordan Morris, who narrowly missed out on a spot with the U20 MNT at the World Cup after coming on strong for the past couple of months. Morris will be a freshman at Stanford in the fall.

Morris, surprisingly, has not featured the most with the reserve team this season, as Henry Wingo holds that distinction with three appearances. Cody Crook and Mark Matula have made an appearance with the Sounders second squad.

It’s been two years since Sporting signed its second Homegrown player, Kevin Ellis. Over that period, Academy Director Jon Parry has focused on the development of players at the youngest age groups within Sporting’s system. The concentration on technical development will be rewarded in the future, but it is still a few years off.

That said, Sporting has players in the collegiate ranks that could help the team in the near future including Saint Louis midfielder Alex Sweetin, who had a solid junior campaign in 2012.

From the youth team, U.S. U17 MNT defender Erik Palmer-Brown is at the top of the pile for the front office to get under contract, but he needs a lot more seasoning before he is ready for the professional level.

The obvious name from the Whitecaps Academy as a potential Homegrown target is Brody Huitema who has 26 goals to his name in 22 appearances at the Academy U18 level this season. Huitema’s success will keep him on the radar, but the collegiate trip to Duke is where his immediate future will take him.

The Whitecaps have other options in the youth ranks to help shore up the roster though. Left back Sam Adekugbe is highly thought of by the front office, and could make the jump to the professional team in the near future.

Canadian U17 MNT goalkeeper Marco Carducci is also well regarded as well, but the Caps goalkeeping group is fairly young with the exception of Joe Cannon (38). Time is on the side of Carducci though, as he has at least another season in the Academy.