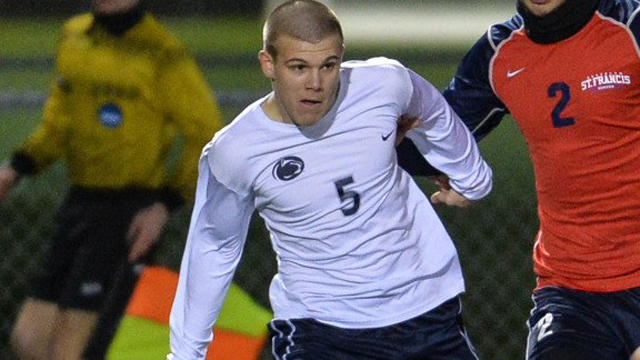 It was another week of upsets in men’s college soccer and the catalyst of those upsets took the lion’s share of the limelight. There were brilliant displays in goal, heroic saves from defenders, timely assists from midfielders, and crushing strikes from forwards.

Check out which players made the biggest impact on meaningful results in this edition of the TDS Team of the Week.

GK Steffan Kraus, George Mason: Kraus made nine saves in a 3-0 win for George Mason against UMBC on Saturday. Kraus has only given up one goal this season in 727 minutes played in goal.

D Skylar Thomas, Syracuse: Thomas headed home the game-winner against Virginia on Saturday as the Orange improved to 8-1 on the season. He was also a key piece of the defense that recorded shutouts against Binghamton and the Cavaliers last week.

D Patrick Zimmer, San Diego: Zimmer scored the lone goal in San Diego’s upset win over UCLA on Friday. It was an opportunistic finish from the defender. San Diego held UCLA to only one shot on goal through the 90 minutes.

D Nick Barnhorst, Charlotte: Barnhorst assisted on the game-winning goal in the 49ers’ 2-0 win over New Mexico. Barnhorst and the rest of the defense held New Mexico to only two shots on goal.

M Magnus Thorsson, Winthrop: The Icelandic midfielder had two game-winners last week as Winthrop improved to 7-2 on the campaign. Thorsson scored twice in a 4-2 win over ETSU. He headed home the opening goal in the 2-0 win over Liberty on Saturday. The junior captain leads the team with five goals this season.

M Connor Klekota, Notre Dame: Klekota has two assists for the Irish in a 2-0 win over North Carolina on Friday. He also helped the Irish control the game throughout all 90 minutes and limit North Carolina to six shots on goal.

M Connor Hallisey, California: The senior midfielder had a goal and an assist for the bears in a 4-0 win over Santa Clara on Friday. Hallisey is up to seven goals and six assists on the season.

M Gor Kirakosyan, UC Irvine: Kirakosyan came up in the clutch again for UC Irvine. The senior midfielder scored late against Utah Valley to push the game to overtime. He also scored the opener in UC Irvine’s 4-2 win over UNLV.

F Connor Maloney, Penn State: Maloney scored twice and added an assist in a 6-2 win over Penn for the Nittany Lions on Wednesday. He followed that up with the game-winner against Michigan on Sunday. The PA Classics alum has seven goals in nine appearances this season.

F Sean Sepe, Akron: The St. John’s transfer scored a goal against Tulsa in a 3-0 win for the Zips. He had a goal and an assist in the 3-1 win over Ohio State as Akron improved to 4-2-1 on the season.

F Robert Kristo, Saint Louis: Kristo came off the bench and scored both goals for Saint Louis in a 2-0 win over Central Arkansas. Kristo leads the team with six goals this season.