Something is brewing up in the Northeast.

Defender Mackenzie Dowd helped Northeastern to a perfect southern swing, as she scored the game winner in a 1-0 win over William & Mary and also nabbed a goal in a 4-0 defeat of Elon. Her goal-scoring exploits, along with contributing to a pair of shutouts, land her player of the week honors.

GK Kaitlyn Stroud, Kansas– In a weekend that featured a number of impressive goalkeeping performances across the nation, Jayhawk hero Stroud anchored a pair of shutouts as Kansas traveled to Texas and picked up Big 12 wins against Baylor and TCU. 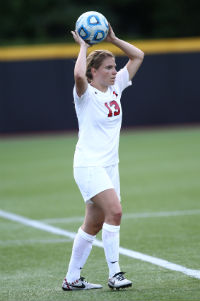 D Kadeisha Buchanan, West Virginia – The Mountaineers jumped on a plane for a pair of games in Texas, and thanks to a Buchanan-led defense, picked up a tie and a win against TCU and Texas respectively. The imposing center back went 200 minutes in the games as West Virginia took a step towards a Big 12 regular season title.

D Mandy Freeman, USC – The start of Pac-12 play saw the Trojans pick up a valuable three points on the road against Arizona, winning 3-0 with three second half goals. Freeman helped keep the game close at 0-0 in the first half, going the full 90 in the win.

M Salina Williford, Penn State – After scoring a goal and adding an assist in a 4-1 win against Northwestern, Williford came through and delivered the game-winning goal in a narrow 2-1 victory over Illinois on Sunday. Williford also assisted in a 7-1 mid-week win against Bucknell.

M Taylor Comeau, California – The midfielder assisted on a pair of goals as the Golden Bears traveled to Colorado and won its first Pac-12 match of the season. Helped marshal the midfield for 90 minutes and keep the Buffalos at bay during a late second half flurry in the 4-2 win.

M Elizabeth Bartels, Marquette – It was a two-win weekend for the Golden Eagles, thanks in large part to Bartels. She scored a goal and had two assists in a 7-2 win against Creighton, and nabbed the game-winning goal in a win over Villanova.

F Cheyna Williams, Florida State – The attacker is heating up at the right time for the Seminoles, playing a big role in a pair of ACC wins last week. Williams scored a pair of goals in a 6-0 victory against Louisville, before following that up with the assist on a game-winning goal in a 1-0 defeat of Virginia.

F Karin Simonian, Notre Dame – The forward picked the right time to notch her first points of the season. After setting up Anna Gilbertson’s game winner in a 2-0 road win against Virginia Tech, Simonian scored the game’s only goal in a 1-0 win over Wake Forest in Winston-Salem.

F Martha Thomas, Charlotte – Returning home proved to help inspire freshman forward Martha Thomas to a big-time performance. She accounted for both goals in Charlotte’s 2-1 win against Florida International over the weekend.

F Margaret Purce, Harvard – The U.S. U20 WNT forward came through in the clutch for the Crimson, scoring the game-winning goal in a 3-0 win against Penn. Purce also notched the game’s third goal, putting it out of reach.