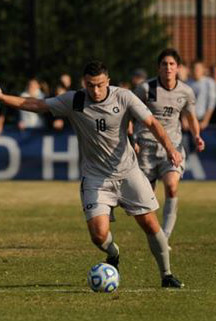 Next up, a look at ten of the best forwards in men’s college soccer – in no particular order:

Brandon Allen, Georgetown, Sophomore: At every level he’s played at so far, Allen has managed to do one thing very well – score goals, and score them in bunches. His 16 tallies as a freshman helped Georgetown in its run to the National title game, and he scored in big moments, as 10 of his goals were game winners. His improvment throughout the year was also substantial, as he added a number of extra dimensions to his game, even if he remains very one-footed.

Ema Boateng, UC Santa Barbara, Sophomore: Deployed last season in different spots of the field, including as an outside back and as an attacking midfielder, Boateng should be closer to goal this year and has the offensive talents to make sensational things happen. Having turned down a possible contract at Manchester City in favor of college soccer, this could be the last season of Boateng’s collegiate career and he’ll look to make it count.

Reinaldo Brenes, Akron, Senior: The spearhead of the Zips’ attack last season, Brenes displayed a calm and consistency badly needed in front of goal – though he did battle through some injuries. He showed his quality when healthy though, and will need to be at the peak of his game during Jared Embick’s first fall in charge of Akron.

Mamadou Doudou Diouf, Connecticut, Senior: With 34 goals in three seasons, Diouf has shown flashes of a very dangerous forward, as he’s an impressive package of pace and power. Question going into this year will be how he copes with the graduation of Carlos Alvarez, who setup the Senegalese forward countless times over the past three seasons.

Robbie Kristo, Saint Louis, Junior: A prototypical college forward standing at 6-foot-4 and weighing in at 200 pounds, Kristo is a menace for center backs to deal with. Reached double digits for the first time in his career in 2012 with 10 goals, and as the Billikens continue to improve and restore their national stature, Kristo is no doubt going to become more of a well-known commodity for the SLU attack.

Cristian Mata, Tulsa, Sophomore: The local product showed his quality consistently throughout a sensational freshman season, probably second only to Allen as far as first year strikers go. He led the Hurricanes with 14 goals in 20 games, and should only continue to get better in his second season.

Patrick Mullins, Maryland, Senior: Arguably the most decorated active player in college soccer, last year’s Hermann Trophy winner aims for the repeats on the heels of amassing 17 goals and 10 assists on the way to Maryland’s College Cup appearance. Can he do it again? The Terps will be loaded as usual and Mullins will aim to finish with the one accolade that has thus far eluded – a national title.

Steve Neumann, Georgetown, Senior: Bursting on the scene at last year’s College Cup with his hat trick against the Terps, Neumann has quietly hit double digit goal totals all three seasons at Georgetown. He shifted into more of a playmaker role with the addition Allen to the attack in 2012, but still got his goals, and can make things happen with his finishing, passing and set piece ability. The Pennsylvania native will enter the upcoming season as one of the Hermann Trophy favorites.

Sean Okoli, Wake Forest, Junior: After a slow start out of the gates to his college career, Okoli’s development has him on track to be one of the nation’s top forwards this year. With a supply line from Collin Martin and youngster Michael Gamble up front next to him, look for the speedy forward to continue to take another step forward this fall.

James Rogers, New Mexico, Junior: Another swift attacker, Rogers can play out wide or up front in an effort to get behind the back line. The Lobos need a big year from the forward with some U20 experience after the departures of Blake Smith and Devon Sandoval, but Rogers has the ability to make it happen.