Another season of women’s college soccer is in the books, with North Carolina adding yet another championship to its collection.

Getting to that point in San Diego produced several exciting moments, as the thousands of games in Division 1 provided entertainment during the fall. As the end of the calendar year approaches, here’s a look at ten of the best matches of the season: 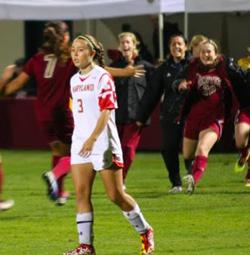 This is a game best forgotten if you’re a fan of Maryland women’s soccer – but a thriller for neutrals.

After a better than unexpected regular season, capped off with an appearance in the ACC tournament final, the Terps looked set for a spot in the third round of the NCAA Tournament, up 2-0 in the second half against Denver with 30 minutes left.

Naturally, the Pioneers had better ideas. After Nicholette Digiacomo pulled one back for Denver, she converted a PK with 40 seconds left to force overtime. Digiacomo then scored a goal from distance a few minutes into the first OT to secure the unlikely comeback and her first career hat trick.

And that’s what took place between Wake Forest and Notre Dame in the second round of the NCAA Tournament. Neither of these teams lit up the score sheet in 2012, so when the Demon Deacons took a first half lead through Kristen Meier’s goal, it could easily have been the only goal of the day.

But the young Irish side dug deep, tying the game thanks to freshman Cari Roccaro, while Mandy Laddish then setup Crystal Thomas for the game-winning tally in the 71st minute.

A bumper crowd of more than 4,000 took in this matchup of two of women soccer’s traditional powers up in Portland.

Four minutes in, Ellen Parker gave the Pilots the lead, and over the next 85 minutes, the hosts hung on to see out a win that looks all the more impressive at season’s end. Portland goalkeeper Erin Dees grabbed the shutout on the day, a sign of things to come later in the year.

North Carolina couldn’t answer, despite launching a total of 20 shots on the night, led by Summer Green’s seven and six from Amber Brooks (though the Tar Heels only mustered five on frame).

Two rivals who switched conferences together contested one of the closest games of the season in their regular season finale, even though A&M already had the SEC regular season title in hand.

Neither side could break the deadlock during the first half, before Annie Kunz scored in the 69th minute to give A&M a late lead. The Aggies couldn’t preserve it, however, as Missouri’s Kaysie Clark tied the game to force overtime.

Six minutes in, Chelsea Jones kicked off the celebration in College Station with the game winner.

Game winning goals are even sweeter on the road, and the Hoyas managed to secure just that after a wild, back-and-forth encounter against a tough ACC opponent in the NCAA Tournament.

Georgetown’s Colleen Dinn opened the scoring in the fourth minute, a perfect start for the visitors. But Tech grabbed two goals in quick succession right before the half, as Ashley Meier and Jazmine Reeves struck what could have been a death knell, as the hosts led 2-1 at the break.

Kaitlin Brenn ensured overtime was a possibility, scoring the equalizer in the 78th minute, and four minutes into the first overtime Sarah Adams won it for Georgetown.

Perhaps the best regular season comeback of the year, it looked like Duke was going to run away with this matchup, as they led 2-0 only 30 minutes into the game thanks to tallies from Gilda Doria and Cassie Pecht.

However, Jillian Graff gave the Gators hope before halftime, scoring in the 39th minute. After the break, Florida stepped up the pressure, and was rewarded with a Duke own goal to tie the game, before Erika Tymrak scored her first goal of the season in overtime to win it.

Going up against arguably the best defense in the nation, the Cavaliers engineered an unexpected and dynamic start to this semifinal, as Caroline Miller and Morgan Brian each scored in the game’s first ten minutes to throw the Seminoles for a loop.

But Florida State showed it could score too – Dagny Brynjarsdottir and Tiffany McCarty eventually tied things up with goals in the first and second half respectively. The 2-2 stalemate only lasted all of six minutes, as Erica Hollenberg and Brian scored two goals in less than two minutes to put this one away, as the Cavaliers went on to win the ACC tournament.

The pressure of penalty kicks is nearly perfect entertainment, and Portland goalkeeper Erin Dees made this a match to remember. On three separate occasions, she faced a Washington State PK taker who could win it with a successful conversion.

Dees stopped all three tries, and her teammate Taylor Brooke finally secured the result for the Pilots, which won the game 6-5 on PKs after the two sides drew 2-2 over 110 minutes.

With a Pac-12 title on the line, UCLA couldn’t shake its Stanford hex.

An early second half goal from Taylor Smith provided a lead for the Bruins, looking to win for the first time against Stanford in six tries. It was not to be, however, as Chioma Ubogagu and Rachel Quon blitzed the Bruins with a pair of goals a minute and a half apart to secure the win for the Cardinal.

The two sides would meet again in the quarterfinals of the NCAA Tournament, with the Cardinal winning by the same score line.

College Cup matches are rarely high scoring affairs, on either the men's or women's side. And while this one had three goals, there was plenty of late drama to go with it. Pack all the pressure and high stakes of this stage, and it finishes in the top spot.

In what was a tight affair, U20 WNT forward Maya Hayes scored 11 minutes into the second half to edge the Nittany Lions out in front. And as the seconds ticked down, it looked like the goal would stand up to punch Penn State’s ticket to the final.

Florida State stalwart Tiffany McCarty had other ideas, and she scored with 40 seconds left to force overtime. Despite the Seminoles owning the momentum at that point with the late tally, PSU's Christine Nairn ended things just over a minute into the first OT, prodding home the winner from close range.