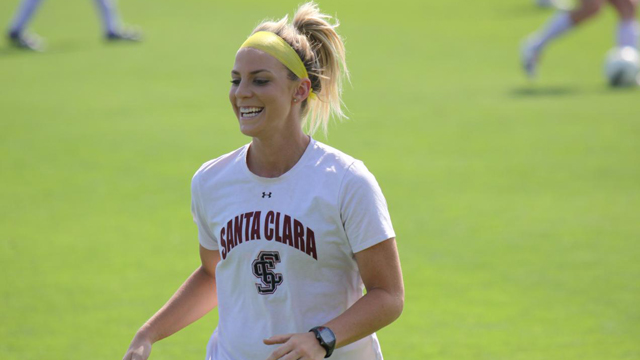 BYU was a couple of inches away from a College Cup appearance in 2012. The Cougars were denied by the Tar Heels in the Elite Eight by an unthinkable save from a sliding defender in overtime off Lindsi Lisonbee Cutshall’s golden chance at the game-winner.

The loss capped what was a very successful season for head coach Jennifer Rockwood and her group. Cutshall graduated, along with a few other key pieces to that team, which means the stage is set for a new group at BYU and, perhaps, a new champion in the West Coast Conference.

After finishing third in the conference last season, Santa Clara has emerged as the clear favorite to win the WCC this fall. The preseason coaches’ poll was unanimous with the nine available first place votes all heading to the Broncos. U.S. Women’s National Team defender Julie Johnston headlines the roster for the Northern California program.

Johnston missed part of last season while playing for the World Cup winning U20 WNT in Japan. In her final collegiate season, the versatile piece is going to be the driving force of Santa Clara’s success.

Sofia Huerta is the other Bronco player with high expectations this fall. The junior forward from Boise was a preseason All-West Coast Conference selection, and should be in contention to lead the conference in goals scored with service from Johnston and current U20 WNT midfielder Dani Weatherholt.

Also, Nebraska transfer Morgan Marlborough enjoyed a great summer training with the women’s national team program and should be in line for a breakout fall campaign.

The Pilots finished second in the WCC last season, and the preseason poll has them pegged to finish in the exact same spot. Santa Clara head coach Jerry Smith handed his first place vote to the Pilots as well – coaches cannot vote for their own team in preseason polls.

Portland returns nine starters from last year’s team including preseason All-WCC selections Michelle Cruz and Amanda Frisbie. The two honorees are part of a seven-player senior class for Portland this fall. Goalkeeper Erin Dees is another member of that senior class. Dees was the hero for Portland in the NCAA Tournament win over Washington State last season, and likely will be a major contributor to the program’s success this fall.

Freshmen Danica Evans and Allison Wetherington are ones to watch, as both have played club soccer at a high level and could contribute immediately. Evans led the Elite Clubs National League (ECNL), the top girls club soccer league in the U.S., last year in scoring for the U18 age group. Her club, Colorado Rush, reached the National Finals thanks to her dynamic play in the attack. Evans is fully capable of scoring from any spot on the field and will be a handful for WCC defenders.

Last year’s WCC champion checks in at number three on the preseason coaches’ poll. The Cougars have to replace some pieces from 2012’s squad, but they do bring back a quartet of highly regarded players. Seniors Cloee Colohan, Rachel Manning, and Erica Owens all made the preseason All-WCC team, which was released last week. Sophomore Michele Murphy, the 2012 WCC Freshman of the Year, also made the cut for the preseason honor.

Murphy will need to carry more of the scoring load with Carlee Payne Holmoe’s graduation. The two combined to score 46 points last season. This fall, Murphy and junior Jaiden Thornock will be expected to do much of the heavy lifting for the BYU attack. With Owens in goal, they may not need to score many goals though.

Michelle Pao and Lynn Williams lead a resurgent Pepperdine squad into the 2013 season. The two standout returners both found a spot on the preseason All-WCC team. Williams is, arguably, the most difficult player in the WCC to mark for opposing defenses. With strength and speed, the target forward for Pepperdine will be top to stop this fall.

Pao brings veteran leadership to the spine of the squad, which will be needed with a roster that has only four seniors and 12 freshmen. With games against California, Texas A&M, Michigan, and UCLA within the first month of the season, Pepperdine will need to grow up quickly to stay competitive.

Junior defender Meghan O’Rourke was the lone Torrero to make the preseason All-WCC team. The junior helped the squad to six shutouts last season on the way to a fourth place finish in the very competitive WCC.

The Toreros main room for growth comes in the attack where they only scored 24 goals in 19 games. Dani Russell led the team in goals scored last year with four. Russell has graduated, and Emily Dillon is expected to carry much of the goal-scoring duty this fall after notching 11 points during his junior campaign.

With eight seniors on the roster this fall, the Lions are one of the oldest teams in the WCC. Will that type of experience help overcome some of the higher profile programs in the coming months?

The Dons are another program looking to pull off a few surprises in 2013. San Francisco returns seven of its starters, as the Dons search for their first ever NCAA Tournament appearance in the 27th season for the program.

The Gaels are looking to improve on a disappointing 2012 campaign that only included one conference win. Saint Mary’s returns eight starters from last year’s squad including a talented sophomore trio of Caroline Beaulne, Anne Whipple, and Cassidy Lynch.

An 11-player incoming class is expected to help Gonzaga climb out of the bottom of the WCC this fall. Head coach Amy Edwards in her fifth season in charge got her group out on the right foot on Sunday with a preseason victory over Oklahoma.

Freshman Sarah Carter scored one goal and junior Tori Lee notched the game-winner for the Zags in the exhibition.

Pacific took its lumps in the Big West last season, and now moves onto an even more difficult conference in the WCC. Shoring up the defense would be a good place to start for Pacific after conceding 46 goals last season.